I have run into a strange issue with my playlists after trying to move my music folders to a new internal drive. Details below:

Roon has been working well. The machine had one internal M.2 storage device and the library files were contained on an external USB drive.

I installed a second internal M.2 storage device. It showed up as expected and was formatted. After the device was formatted, the following steps were performed:

However, after I rebooted the system I noticed that a number of playlists had 0 files. Others had fewer songs than before the reboot.

I now, restored from a backup from a day or so ago. After the system came up, the new internal drive was disabled in settings and the USB was enabled as expected. I now performed the same steps as above and ran into the same behavior. As soon as the system is rebooted songs disappear from the playlists.

Currently, I have restored everything and performed the steps again but have not rebooted. Things are working as expected.

Based on reading various discussions on the forums, I am following the correct procedure and everything should work properly. Can you please let me know if I am missing a step? Why do the playlists lose songs after I reboot? If you require any additional details, please let me know.

Welcome to the forum and thanks for reaching out to us here. This behavior does seem strange indeed. Can I please ask you to provide the following additional information?

Thanks for getting back to me, @noris.

Here are the details you requested: 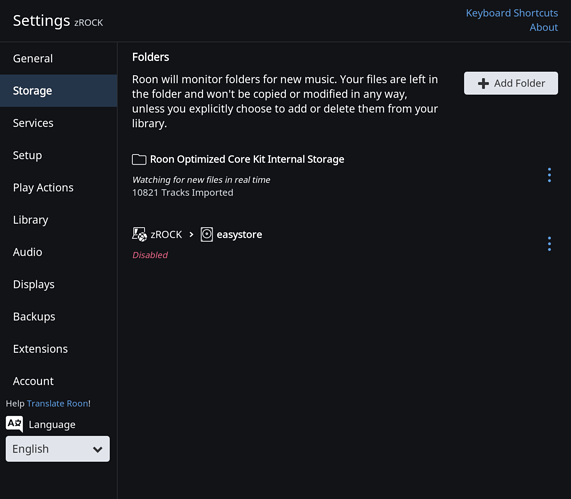 Please note that I was thinking about what may be different about some of the playlists and I think the ones that get impacted are the ones that were originally imported from .m3u files when I set up the system a while back. The ones that do not change were created in Roon. Maybe that will help narrow down the issue?

Please let me know if you require additional details or there are issues accessing the Dropbox folder. Thanks for your help!

Thank you for putting together such an organized diagnostics package, I have created a ticket and have requested feedback from the technical team regarding logs. I will be sure to let you know once I hear back, I appreciate your patience in the meantime!

I appreciate your patience here while QA had a chance to review this issue. Since the playlists is a .M3U playlist file, it is possible that the files being referenced are absolute path instead of relative path. By this I mean, we believe that your .M3U references the exact location of the previous drive instead of the new one and rebooting your ROCk causes the files to not be found any longer.

As a follow-up step, can I please request that you look over our playlist documentation (<-clickable link) and confirm that your playlist is referencing relative path instead of the absolute path of the previous hard drive? If you are not sure, you can also send me the .M3U and I can take a look.

Also, can you please clarify as to how you copied the music files/.M3U playlist files over from one hard drive to another? Did you use another PC to facilitate this transfer process? If so, can you provide the information of the PC’s Operating System and which App you used to copy the files? Did you use Windows Explorer / OSX Finder?

I only used the .m3u files when I originally installed Roon a year or so ago. The .m3u files were generated on either a PC or a Mac. I do not recall exactly what system they originated from. I edited the playlists using a text editor to use the relative path to the files on the USB drive on the Roon system. I copied the playlists to the USB drive in a monitored folder ‘Playlists’. Once the playlists were imported the .m3u files disappeared and the system functioned as expected. All playlists were accessible in Roon. Note that at this point I did not have the internal storage in the system and was only utilizing the USB storage location.

Unfortunately, I am not able to locate a backup of the original or edited .m3u files but I will continue to look.

When I installed the new drive some weeks ago, I did not utilize any of the .m3u files as I assumed the existing playlists in Roon would just work after the restore as they were already functional in the system. I copied the music files by first copying the folders from the USB storage location to a Mac (using Finder) and then from the Mac I again used Finder to copy the music folders to ROCK’s internal storage. Note that no .m3u files were utilized at this stage. After the restore I disabled the USB drive and enabled the internal storage. After the scan everything was functional, I could play songs from the playlists. The issue of songs disappearing only arose after the system was rebooted.

The reason I mentioned the .m3u files was because the playlists that lose songs are only the ones that were originally imported using the .m3u files as explained above.

Please let me know if you have any follow up questions. I will continue to look for the original .m3u files.

I have a few follow-up questions:

Unfortunately, I have not been able to locate a backup of the .m3u files.

I will have to try out the suggestion in item 2 when I get a chance. I am currently out of town.

The import process shouldn’t remove the .M3U files at all, just import them to the Roon database. I’m looking over diagnostics again and I see that your playlist files were previously listed under the InternalStorage/Playlists/ folder on your ROCK. Can you check to see if your playlists are still there?

What I suspect is going on here is that these playlists are either using absolute path and the drive change allowed them to not be found or that the relative path you have set does not match the exact folder contents of the new drive.

I would try to locate these playlist files to see if you can make out the Absolute or Relative path and then make sure that the new drive is following the same structure. If this still does not help, I would go on to option #2 of trying to save these playlists as Roon playlists after a restore.

I am finally back in town. Sorry for the delay in responding.

I looked in the Playlists folder both in the current InternalStorage location and the previous USB drive location and unfortunately, the files are not there any more (both folders are empty). I have not been able to locate them in my older backups either.

At this point, I am going to try and recreate some of the playlists. If I find the original playlist files, I will let you know.