Playlist Issues After Update yo Version 1.7

Netgear R7800, Ethernet to all devices, music is stored on a Synology DiskStation.

After updating to version 1.7 all of my newer playlists show that my local tracks are “Unavailable “ but my Tidal tracks are playing fine in those playlists. All the tracks shown unavailable in the playlists are available in Albums and all play just fine. Other than the playlist issue I have no other problems with version 1.7. I have tried restarting my ROCK a couple of times but that did nothing for me. I can’t restore from a backup because that would be an earlier version. I really don’t want to rebuild them since some of them last over 24 hours. Any thoughts on how to get them them working again? Thanks.

Can you also share a screenshot of Settings > Storage?

How would I do that with iPadOS?
Thanks

We have some instructions for sharing screenshots here: 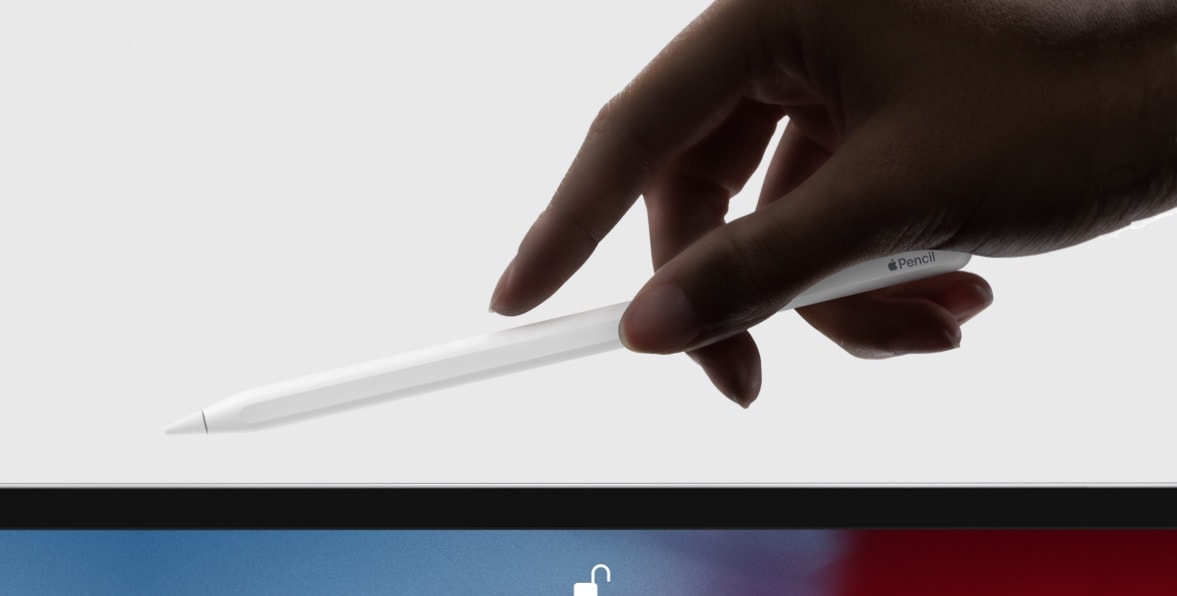 In iOS 13, you can take screenshots using Apple Pencil. But there are many more ways to take iPad screenshots. Here's a rundown. 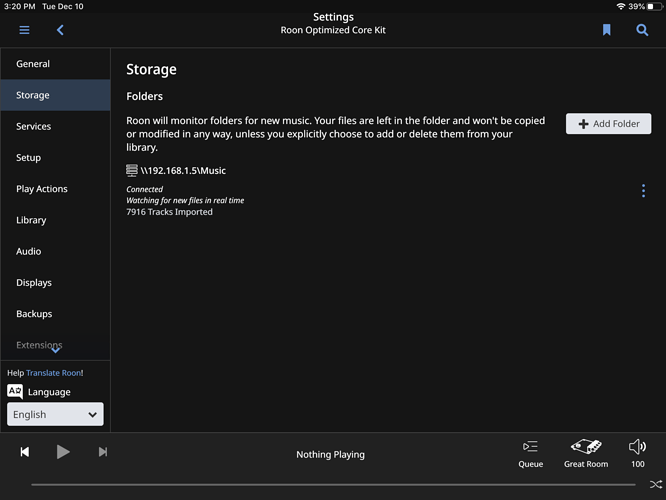 Hopefully the screenshot ones through. The screenshot process isn’t working in a way tat makes sense to me. Thought i could copy to clipboard and paste it that doesn’t seem to work.

This screenshot is looking okay — Can you share a screenshot of the playlists showing as unavailable as well?

Do you have any backups of Roon from before this issue occurred? 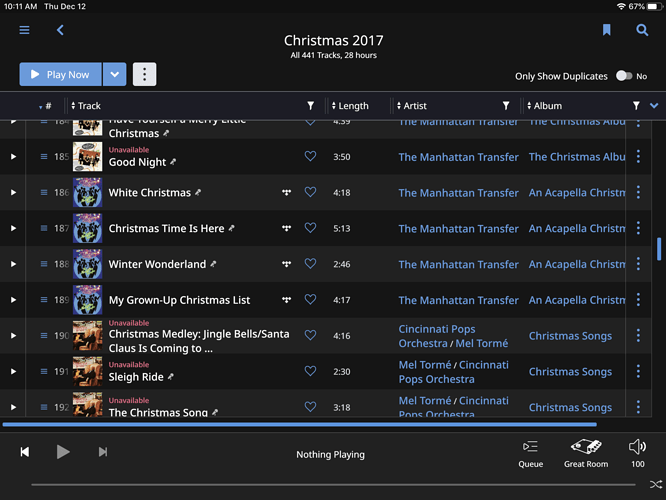 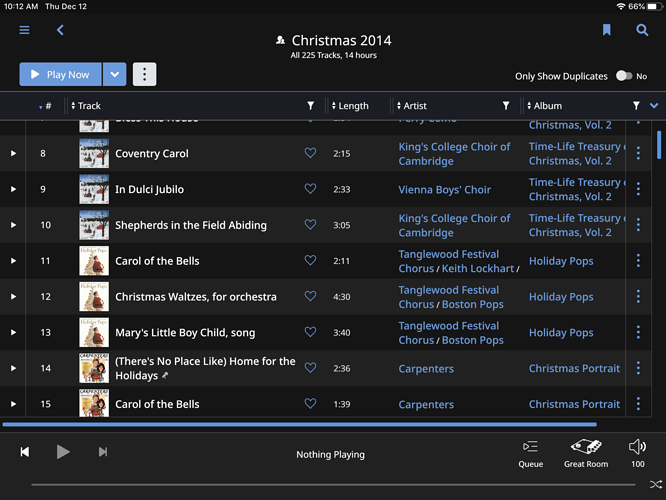 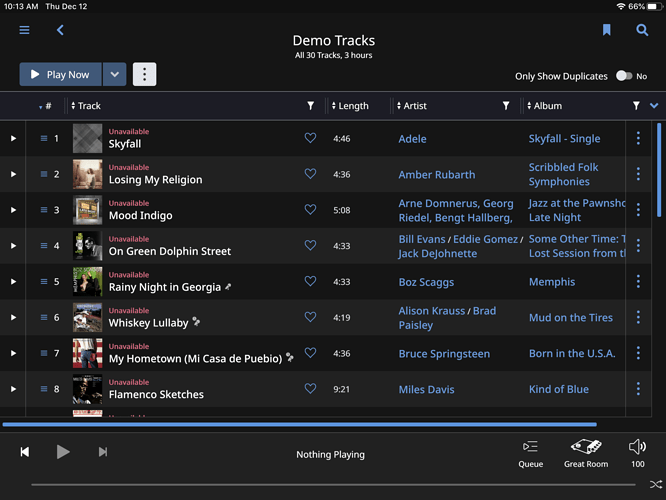 This makes no sense to me… why are local tracks in some playlists available and the same tracks unavailable in others?

Did you make any changes to your storage devices? Did any of them get disconnected or did you change your storage settings?

Using Skyfall by Adele for example — Can you access this outside of the playlists? Can you share a screenshot? Does it play okay?

All the file that show as unavailable in the playlists play just fine from albums, for the 3rd time, not sure how many times I need to state this. No changes have been made to storage, files have been in the same place since long before I started using Roon.

Here is the screenshot you requested. 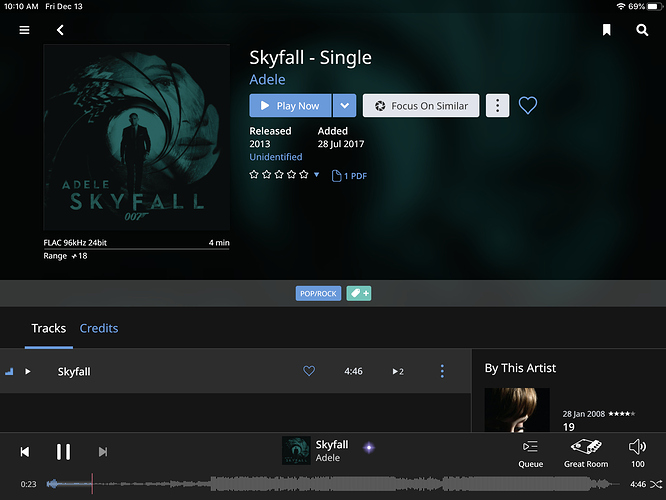 There are two things I want to try here:

Here is a screenshot of how Skyfall shows in Albums 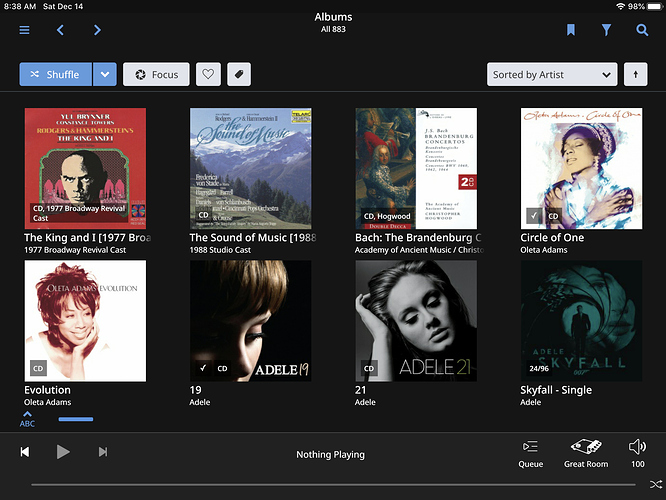 And here is the Clean up Files page 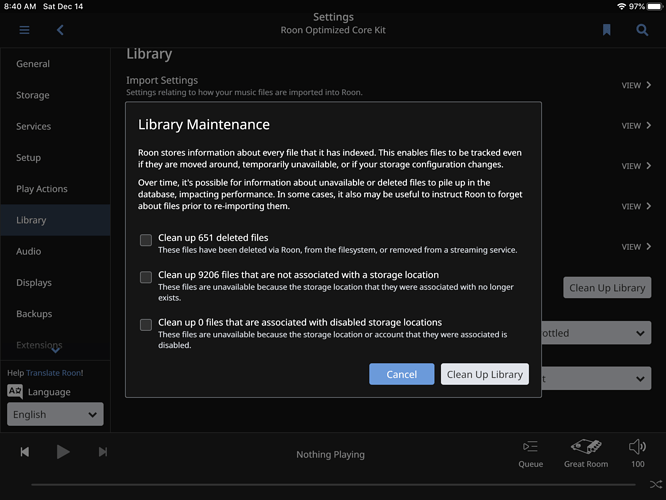 Do you have any backups from before this issue occurred? Even if the backup is from an earlier version you should still be able to restore the backup and it will update as a part of the restore.

Here’s what you’ll want to do:

How can I find the date of a backup and the date that I updated to version 1.7. I have another question regarding backups and Dropbox. I only use Dropbox for RoonBackups. I have a Roon set to only save 1 backup on Dropbox. Yet every 3 or so months I get a message from Dropbox that it is full. Why? When I go into Dropbox it is full of Roon folders of a variety of dates. Doesn’t Roon delete old backups before saving new on DropBox?

You should be able to see the dates of the backups through Roon when you go to Backups > Browse button next to Find Backups > and selecting This Folder for the backup location.

Yet every 3 or so months I get a message from Dropbox that it is full. Why? When I go into Dropbox it is full of Roon folders of a variety of dates. Doesn’t Roon delete old backups before saving new on DropBox?

Can you share a screenshot of what you see in dropbox? When you go to find backups do you see multiple here?

OK, I went back and restored the last version 1.6 database. When it was done and relaunched, it came up immediately and said there was a update for ROCK waiting to relaunch. I did that and it came up saying an update to the database was needed, it did that and all the tracks again show as unavailable.

As far as Dropbox, I had deleted the folder a couple of weeks ago so I can’t post a screenshot at the moment. When it occurs again, I will.

Not sure what to do now about my playlists. I could try an older backup, but not sure if that would do if anything to solve the problem.
Keith

Just to add more confusion to this topic, I just went through all my playlists in alphabetical order.

Every other playlist that has local tracks shows them Unavailable. The alternate playlist have no issues even if some of the tracks that show Unavailable in other playlists are in them, if that makes any sense.

All Tidal only playlists are fine.

After the update do you still see the same number of tracks showing up in Library Maintenance?

The file counts are exactly the same as the screenshot I sent you.

I have given up on trying to save my playlists. I came to the conclusion that I could have recreated them by now.

A post was split to a new topic: How to remove Dropbox