Hello specialists,
I know that this is an old issue. But that is the reason for me for do not understanding that it is not solved.
So far I see it is not possible to sort songs that are included in a playlist by album packages. I have hundreds of songs in one playlist and its difficult to have an overview. And I think it makes no sense to create for each album a playlist.
In other words: I promise to buy the lifetime abo as soon as you (yes you from Roon

hi uli
As I am interested in qour question, could you please explain a bit more?
How is your album playlist build ( that’s what I am after) and what do you want to sort upon?
As far as I can see, one can sort alphabetically both on albums and tracks at this moment
Dirk

And Artists and Album Artists. (I am not really responding to you, but joining in on your comment). There are many options to add to Playlist Sorting found in the down carot on the right hand side.

I try to explain.
For example:

And Artists and Album Artists. (I am not really responding to you, but joining in on your comment). There are many options to add to Playlist Sorting found in the down carot on the right hand side. 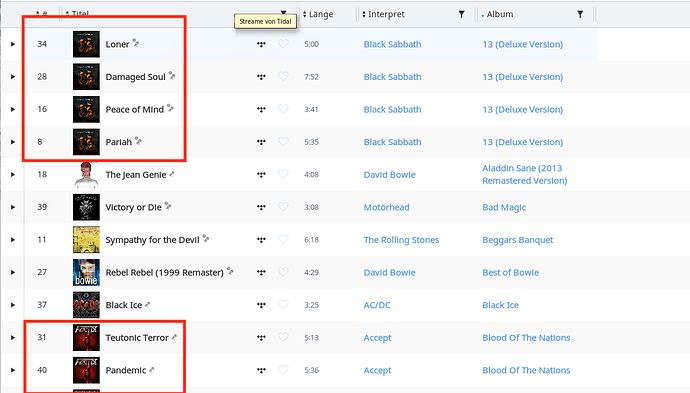 It seems like you want to have both Alphabetical Artists Sort AND Alphabetical Album Sort going at the same time, which is not possible for the entire list; however, if you filter on a specific artist and then alphabetize their albums, you could have all of the Black Sabbath tracks on your playlist grouped by album and then you can play them in the queue.

Having both could be a Feature Request.

If I put a complete album in a playlist I find for each song an album icon. Ten albums each with 10 songs means hundred icon.
My wish is to have ten album icons and if I click on one of these album icons a new window opens that shows the ten songs that are included.

Then you should put in a Feature Request.

This sounds like the OP is using playlists for the job Roon tags are meant for.