The current playlists view for browsing is not very usable especially when compared to the smooth album view.

The current playlist view is fine, I guess, if you only have few playlists, but if you really like to make collections of your favourite songs by genres or moods you end up with quite a few of them and thats when Roon’s usability drops way below Tidal and Spotify and feels like an afterthought compared to the rest of Roon UIX and is against the promise of Roon of showing your music visually impressive way instead of boring lists?

Could the playlists treated as ‘custom albums’ so to say, they’d use the same view as albums do, similar big images and sideways scrolling as albums, PLUS the biggest of all being able to search alphabetically like you can the albums. (when you know your playlist is called “Smooth”, every time scrolling all the way to playlists starting with ‘S’ is pain…) And have the possibility to sort them also by ‘by date (created)’, ‘by date (new songs added)’ and maybe ‘most played’.

Quick mock-up which only shows few playlists, but you get the idea: 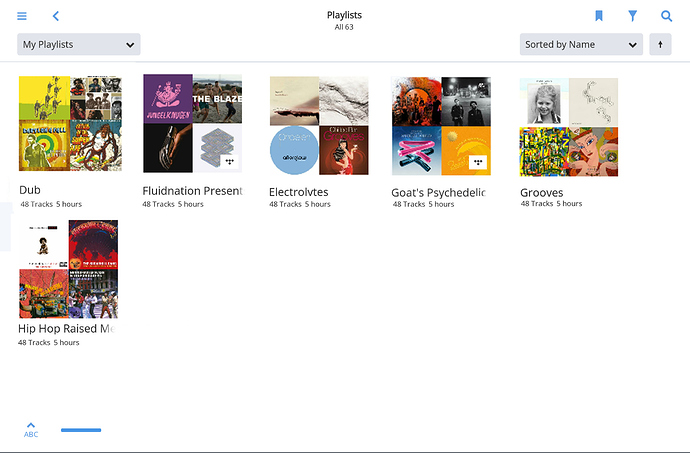 I like that a lot.
I have argued for uniformity in many areas.
Nowadays, Tags have a similar look and behavior.

Some are ordered, some are not.
All can be played, browsed, picked from…

Custom ordering would be really nice too. The one I used most is always at the bottom of the list which is kind of annoying.

Tags is also inconsistent because it doesn’t adhere to the album scale of the main album view - i.e. if the smaller icons are used in album view, tags should follow yet they are huge icons on my iPad. Hopefully if playlists go this way, they will tidy up the whole thing.

I’m surprised that Playlists haven’t seen any love in 2 years or more. A few different sort options would be nice and the mock-up above looks great.

Looks a lot like every streaming service I’ve used, Spotify, Tidal, Pandora, iTunes. Roon isn’t Foobar and should strive to be but seems there’s been a lot of effort on other bits while missing out on the primary methods many find, curate and consume their music.