Hi, I am fairly new to Roon and have had no problems until a few days ago when all of my playlists (initially imported from iTunes) disappeared. This was around the time that I upgraded to Roon Vers. 1.3 (build 269). On the Mac side of things I am running Mac OS High Sierra Ver. 10.13 on a mid 2015 iMac 3.3 GHz with 16 GB memory. App of my 11,790 tracks are stored on the Mac and the share Library XML with other Applications box is active. The iTunes Music Library.xml is in the same folder with my iTunes media. I have checked to make sure that the XML is updating. When running Roon when I go to the Settings tab and ultimately to Music Folder and tap the edit button the Import iTunes Playlist tab is not active. When I switch it to active (Yes) and then press the Save button a red banner appears that states “There was an unexpected error: Unexpectederror”. The cancel button takes me back to the Folder window where the Music Folder will now be missing, but which will reappear after a bit. If I then repeat the process I will either get the same result or the dread “Fatal Error” message. When that happens Roon will not reboot until I trash the application and download a new copy. All of the above will then repeat: albums, artists, tracks are available but no Playlists. Finally, I have deleted the Roon database on my Mac but that does nothing. Thank you ahead of time for suggestions.

have had no problems until a few days ago when all of my playlists (initially imported from iTunes) disappeared. This was around the time that I upgraded to Roon Vers. 1.3 (build 269). On the Mac side of things I am running Mac OS High Sierra Ver. 10.13

Same symptoms, for what it’s worth. After I initially updated to build 269, my playlists disappeared and came back. Now, they are just gone. I’ve checked to ensure that the playlist XLM from iTunes is accessible.

Hey @Robert_Carlsen @Krutsch – we are tracking a bug in the latest release related to multiple XML files in your watched folder. Since this release, it appears that Roon can get confused about which one has the iTunes playlists, and that can cause this symptom.

If that’s not it, drop us a screenshot of your Storage tab in Settings, and flag @support – we can take a deeper look, and for what it’s worth we have a fix on the way for the iTunes issue.

I’ve been a delighted user of ROON for a year. But lately I’m not a happy camper as ROON no longer sees my iTunes playlist. This used to work just fine. But no longer.

Yes I’ve read the post on how to point ROON to to the iTunes folder after confirming that the XML file is in the same folder as the music files. By forcing a rescan I got ROON to once again recognize my iTunes playlists and then, a few days later they vanished. Very frustrating and I’m out of tricks. Help please!

Hey @Gary_Rancourt – see my post above and we’ll go from there. Thanks and sorry for the trouble!

Sure - confirmed. See the attached images for the Roon Storage settings, the contents of the iTunes folder and the iTunes Advanced Preferences.

iTunes playlists were working fine, prior to the last update. 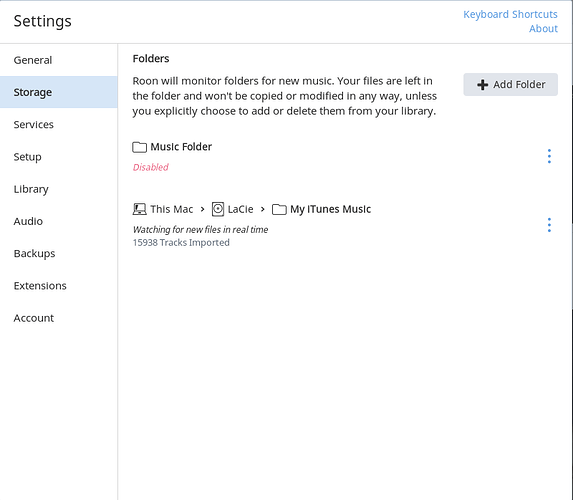 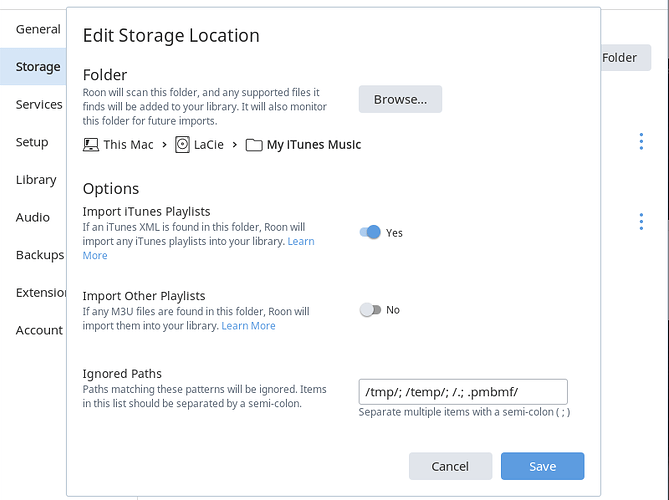 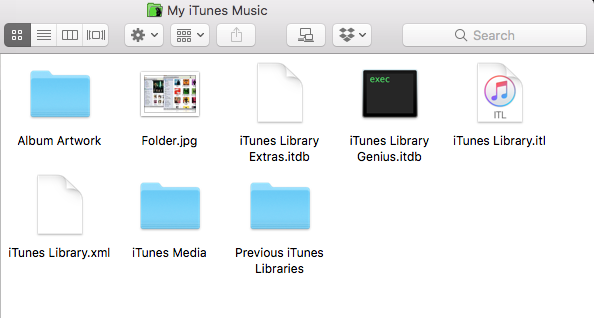 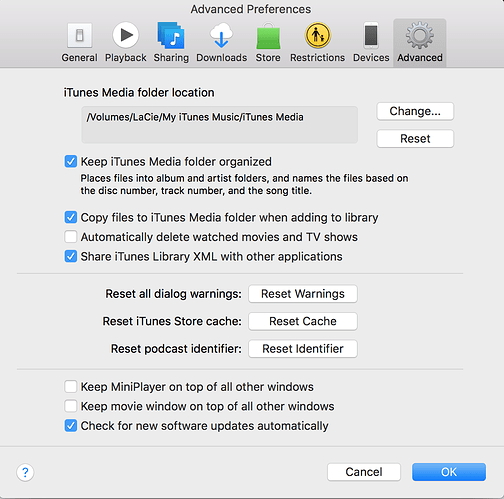 I did find a second iTunes XML file, which I deleted. Since then I have spent a awhile repeating all of the procedures which I listed above in the initial post to this thread with the same non-results and still no playlists.

@support I have done the same. I did find an extra xml file, deleted it and went through all the procedures outlined above and got the same results. Roon still doesn’t see my iTunes playlists. And yes, this is the right XML file as I see that iTunes is updating it. So what now? What do I try next? 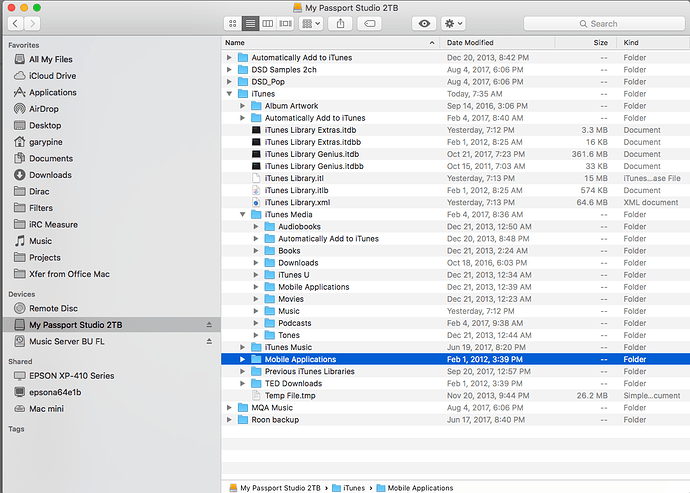 OK. This is crazy. I checked again a few hours after my earlier post and now the iTunes playlists are back! I don’t know why they weren’t this morning but now they are. I’ll take it.

Hey @Robert_Carlsen – can you post a screenshot of the Storage tab of Settings for us?

Hey @Krutsch – could you upload your iTunes XML somewhere I could get a look at it? Maybe you can PM me a Dropbox link?

Let me know if you need somewhere to upload it to and I can get you instructions for uploading it directly to our server. Thanks!

I’m on Roon 1.3. (269, 64 b) on my Mac running 10.12.6.
Since I’ve installed the new version (-s im fact, because I had updated on my iPhone as well as my iPad), my iTunes-Playlists are gone (leaving only the Tidal-Playlists). Also my two Squeezeboxes are no longer visible. I deleted and reinstalled Roon but to no avail. I had no problems with prior versions of Roon.

As to the playlists I tried everything in your troubleshooting guides even if that seemed a bit unnecessary since my installation worked just fine up to the updates. My old Roon backups unfortunately are corrupted and won’t help. Any hints or even an older version of roon (My last one when the world was lovely was 259)?

Hey @PeeBee – see my post above and let us know if that helps.

If not, we can take another look at this. Thanks! 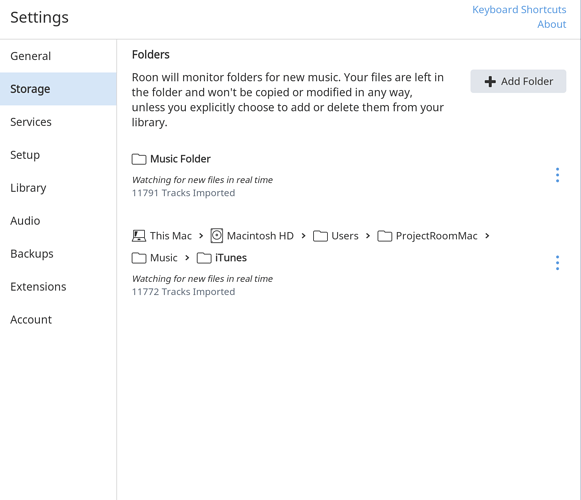 Same problem with imported itunes playlists. They disappear and I have to quit Roon and iTunes and then restart a couple of times. Sometimes they reappear immediately and other times it takes an hour before they come back.

I have checked in my iTunes folder and there is only one .xml library.

This problem appeared immediately after the latest update

lucky me. I got my backup working and replaced build 269 with 259 - and all my playlists are here again - and they updated immediately to newest titles that I added via iTunes in the interim.

To add to the confusion: I am watching three folders (“iTunes”, “Music” and their common parent directory which is root on this ((dedicated) volume). I have xml-files in all three. The xml in the parent directory does not seem to be have been updated since July (contrary to the other two) so I deleted them. No difference in 269. (And also no difference in 259.) Perhaps I’ll experiment a bit with the other two since I’m now able to replace the new version with the functioning one.

BTW: Squeezeboxes are still not visible with the replacement of the 269 by the 259 version so that seems to be another cup of tea - I’ll be following this somewhere else.

OK. I get it. This is some kind of trick or treat game. My playlists came back and then later in the day vanished again. I’m at my wits end. What do I try next?

@support. Just to recap this mad, trick or adventure: iTunes playlists vanished. I looked for extra copies of the xml file in my iTunes folder, found one and deleted it and verified the the remaining XML was the latest one and was being updated by iTunes. I went into the edit mode and confirmed that the scan iTunes switch was on and then forced a rescan but my iTunes playlists were still missing. Came back two hours later and they were their. But my elation was short lived as 6 hours later they were gone again. Really!? I’m at my wits end. What can I try next?

Maybe you can PM me a Dropbox link?

All, please be advised that myself along with the rest of the support team have been discussing the reported behavior(s) here for the last hour and have a few ideas on how we should move forward in addressing your issues. In light of this, I will be contacting you all individually via PM for further data gathering.

Kenneth, I believe @mike has already reached out to you and CC’d me on the PM.