I’ve been having various issues with playlists that are increasingly frustrating. These are the behaviors I’ve seen in the order they have happened over the course of the last few months:

The last issue is the most recent and happened after I had done some work on my home network. I’m running RoonServer on a Mac Mini (upgraded from Roon 1.0). My files are running on a NAS, which is configured as a watched folder. The NAS was shut down, while I worked on the network. Mac Mini was rebooted while the NAS was down. After everything was up and running again, several of the playlists I created were completely gone.

I’m a lifetime subscriber, so it’s a forgone conclusion I need to get this issue resolved. I’m willing to start from scratch if that is necessary.

Apologies for a belated response to your post. Are you continuing to experience these issues ?

Playlists are contained in the Roon database along with edits within Roon (as distinct from tags embedded in the file). Backing up the database in the Mac OSX library folder is prudent and there is a discussion about it here:

If you are continuing to experience these issues then we will ask @kevin or @vova to look into it further.

I’m not sure I’ve lost anything since the post, but I’ve lost confidence in the stability of the library. I would like to identify what might have gone wrong, so I can avoid problems in the future.

Another issue is that when I try to add a song to a playlist, not all playlists show up in the list.

I think we are dealing with a Tidal/Roon integration issue.

Hi Norman,
I’ll notify @vova (that syntax does it) and he’ll investigate further.

Hello @photon we’ve already found few issues with the playlists and we are planing to fix them in our next releases. But we need an additional info from you to define whether you have the same problems.

try to add track to existing playlist, but the playlist doesn’t show up in the list 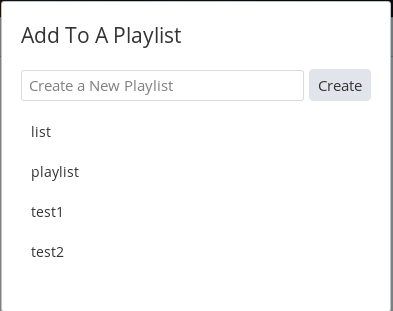 some, but not all, tracks disappear from existing playlist

I think this is a known bug, and it is with the dev team now. But let me re-check.
We’ve discovered that when you have a playlist with ‘Unavailable’ tracks (for e.g. you’ve created a playlist using tracks from two different watched folders. And in case of disabling of one them tracks, from disabled folder, will be shown in the playlist but with ‘Unavailable’ status) after Roon restart such tracks will disappear from the playlist.
So, is there a chance that the tracks which are missing now were Unavailable at that moment of time?

Can you be more specific here, what kind of playlist was it: TIDAL, created using Roon or from the watched/itunes folder ? Did it disappeared completely (i.e. it isn’t even shown on Playlists browser) or it became empty?

I have an issue with irregularities with Roon today.

First of all, I noticed that:

The 2 Roon playlists that I have created since I subscribed only have six and seven songs in them (previously Roon Playlist 1 was 75+, Roon Playlist 2 40+)

The Artists favourites tags are all in place.
No albums are missing.

I run Roon with TIDAL. It’s running as a master on a Macbook Pro - and remotely on other Macbook Pros. There were TIDAL updates other than that, no software or major operating system updates have been installed. Machines haven’t even been off. Or rebooted before the tags/playlists were lost.

It’s hard to tell but there doesn’t seem to be a common theme between what’s left in the playlists - definitely not chronological, as if it’s kept what was added to the playlist last. And lost early additions only. Of the songs left - there are ones added last month and yesterday.

Like Norman, if it happened a year from now I’d be devastated. So keen to identify what potential problems may be.

So when I first installed Roon, I had Tidal playlists. For example, one
called Covers. I could see and play the Covers playlist in Roon. I tried
to add a song (not sure if it was from my library or Tidal) to that
playlist, but Covers didn’t show up in the drop-down list (like in your
screenshot). I ended up creating a new playlist using Roon and now I have
two playlists called Covers in my library, which is confusing. I can play
songs from each playlist, but only one shows up in the drop-down list.

It’s been a while, so unfortunately I can’t fully answer your other
questions. I can say that I still have one playlist that was created from
songs in my library. The playlist is still there, but it is empty.

My audio files are on a NAS drive and it’s possible that sometimes that
drive may not be online when Roon starts. Is that related to the
“unavailable” scenario you were describing?