Please, can somebody from Roon explain to me why the photo of Taylor Swift

is used to represent „Indie Folk“.

Not that I do not like her last albums, but she is so much the opposite of Indie. LOL

In seriousness, I thought the genre pictures depend on the artists you have in your library that are tagged with the genre, and some statistics. However, Taylor Swift does not have Indie Folk on her artist page

Maybe you have albums from her in your library with that tag? You should see your library’s genre content by browsing the Indie Folk genre.

In any case, you can change the genre picture

In any case, you can change the genre picture

Sorry, I was wrong. Seems you can only change the parent genre and the description. In this case, I suppose the OP will have to find the album(s) in the Indie Folk genre that make TS percolate to the top and remove the genre from them if it is not applicable

To further complicate matters, ‘Genres for you’ doesn’t show the same image when you click through … 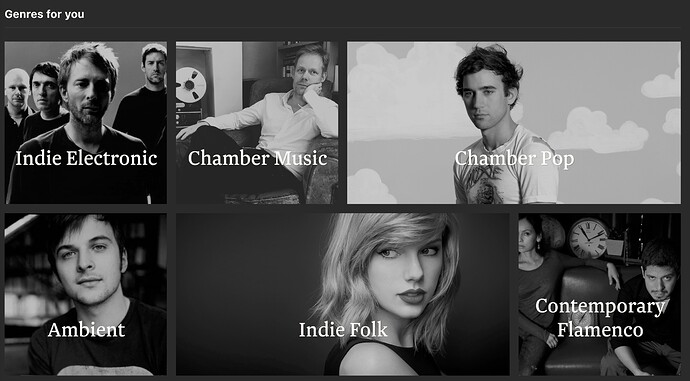 I can’t check this with Indie Folk because I don’t see it in Genres for You and see no way to expand these to “More”. I do, however, get a white blob for Paisley Underground: 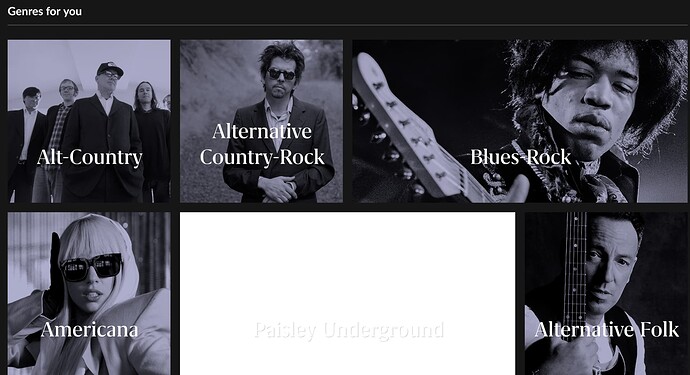 Thanks for explaining how this works.
Lady Gaga? as representative for Americana?
At least this feature has some kind of humor.

Edit: I have nothing tagged from Taylor Swift myself. All songs in my library are from streaming services.

I was wondering who the Americana person was, and I don’t have any Gaga album in my library. So it seems to not work the way I thought

So maybe it is not Lady Gaga (therefore my question mark).

We definitley need a function to click on a photo and get the answer to the question “who is this artist?”

It is Lady Gaga, same photo as her artist page

… answer to the question “who is this artist?”

LOL, yeah. And definitely it should make better choices

Interesting, thanks. However, I don’t have this in my library and, as non-library albums are apparently considered, Lady Gaga must be a minuscule percentage of albums tagged as Americana genre. So it’s still weird

And that makes her the poster girl for the genre Americana?

Please explain the algorithm behind this choice.

Lady Gaga is a leading artist in many genres

By the way, the algorithm definitely does take the local library into account.

Linked below is an explanation I posted a few months ago. As mentioned, the images you see associated with Genres in Roon are influenced by artists in your local library, and tags from our metadata providers. Those genre tags are cultivated from the artist’s main page and individual albums. Albums that are HUGELY popular like the A Star is Born Soundtrack (@Suedkiez "roots rock is also tagged on the album) can place a thumb on the scales due to their reach.

Hey @Brock_Bair, Thanks for reaching out about this. I’d like to clarify that Roon isn’t choosing anything. The images you see as genre headers are parsed from genre data via our metadata suppliers. Rovi/TiVO/AMG is one of them, and they list all the Zeppelin albums as Blues. Because of that, and possibly some interaction in your library, that’s the image you’re getting. [Screen Shot 2022-02-24 at 2.35.33 PM] I haven’t looked lately but I’m likely to have every Zeppelin album in my library, …

Thanks. The algorithm is broken or the weighting is wildly off if a single popular album can tip the scales so much that Gaga can become the icon for both Americana and Roots Rock. The only explanation for the latter that I could find is this album and its track artists:

What happens if Beyonce contributes to a tribute album for Johnny Cash, she’ll appear on all the Country genres?

Probably not. If she recorded a straight Country album, it went supersonic, and it was crushing repeat plays in Roon…possibly. Again, it depends on your individual library. Gram Parsons is the king of Americana for me.

Cute but doesn’t fix the problem. Can you not refer this to the Roon developers? Something is clearly not working in a beneficial way

Again, I don’t have a single Gaga in my library and tons of stuff tagged as Americana as well as some Roots Rock, none of which is Gaga

As could be seen also in the old blues/Led Zepplin threat, there is something off with the current system choosing representative artists for a genre.
For me this would be perfect task for Art Director, so the Roon users could vote for an artist who would fit best representing a genre.
Maybe this is something which could be pitched to the development team?

I have the same problem with Reggae being represented by Gilles Peterson, a white Anglo-French Jazz DJ!