Please can we have the ability to edit track data [Resolved]

Mistakes occur because of incorrect metadata or maybe no metadata at all (particularly with Classical albums) or typos from earlier editing on another program like Sooloos. These need correction.

At the moment I need to go to edit using Sooloos and that can be a PIA. An album might need to be exported from Roon, then imported into Sooloos for editing, then exporting back to Roon. Yes it works but will not if any hi-rez files need massaging as Sooloos will not accept them. I guess other programs can do the same (Carl suggests dbPoweramp) but it would be much nicer if that track editing facility was available in ROON.

I must be missing something here but just in case… 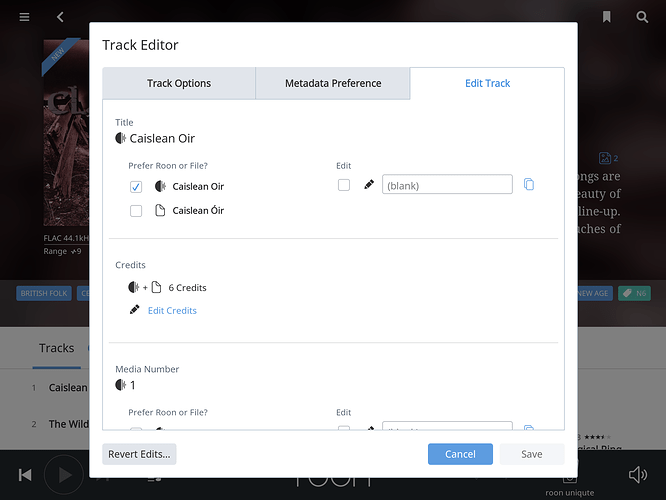 Thanks- it is me who was obviously missing something - the blue tag top right was not clear and I missed it. I had searched through all edit options I could find, but never discovered the track edit one.

Unfortunately that is one of the problems with ROON for dummies like me. Some options are not intuitive and others, like the edit tracks, are not obvious. To my way of thinking all edit functions should be together and be not scattered as some are.

Maybe it will all come together eventually?

It’s all in the knowledge base and on this forum for the asking. Three dots gives options. I track edit all the time adding performers as I listen. It’s therapeutic…

the blue tag top right was not clear and I missed it. I had searched through all edit options I could find, but never discovered the track edit one.

Hi John,
Just so your clear: dBpoweramp edits the tags that are imbedded in the audio files, which Roon can read and optionaly display. Where as editing it Roon, only updates Roon’s database … the actual files are not changed.

Unsolicited Advice Dept.: John, reading about your various metadata-related issues, I think you should take @Carl’s advice to heart. You could really benefit from getting comfortable with a capable tag editor. If you find you don’t like dBpoweramp for some reason, there are many other tag editors available. Many Windows users here use Mp3tag. I’m a Mac user, and I really like Yate.

Thanks David, but maybe I’m too dumb, but I cannot see how either of these programs can help the challenges I’m facing.

I’m currently going through the whole collection to detect problems with data and/or presentation and I’ve discovered oddities in the Beaux Arts Trio set of Haydn 9 albums of complete piano sonatas.

Two of the 9 albums display correctly but the 7 others do not. Checking back to Sooloos where they came from I see the fault lay there. Attempting to Edit - Identify did not insert the extra track data so Roon could not apparently fix this presentation: 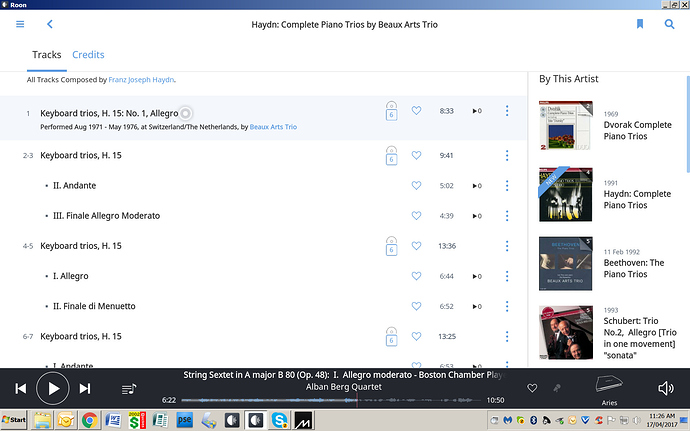 “Using Basic File Information” did nix so the 7 “faulty” albums were deleted (and the library cleaned) so it was back to Sooloos to edit the track info so each piano trio was identified and showed as the header.

The corrected version was imported from Sooloos into Roon. [I guess you are meaning those track editings could also have been done via either of the other two programs but doing it via Sooloos seems to work OK].

First up the display via Roon did not alter, despite choosing the correct identification set from the left but all went well upon using Basic File information.

But then I struck another problem [life gets interesting in Roon sometimes]. 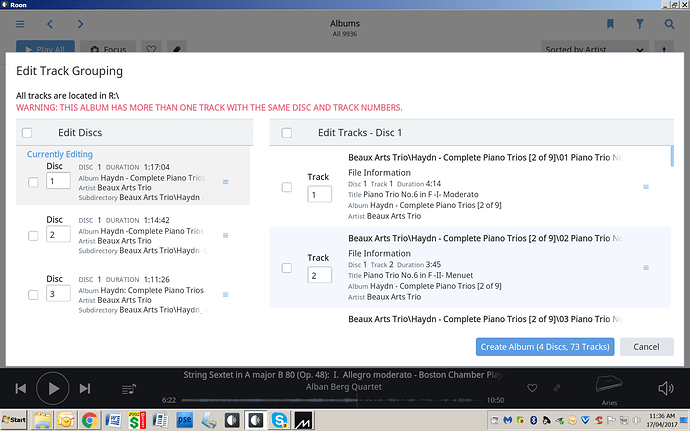 image.png1920×1200 217 KB
Now it has 11 tracks as does no 2 in the set and it appears Roon is proclaiming I’m trying to double up no 2 again, something incorrect as the track titles and times are different for no 2 and no 4 in that set of 9.

Suggestions about what I’m doing wrong? Or is there a problem with Roon? I had a similar “merge” problem the other day.

Thank you for your patience.

I’ll add in screen shots of the two albums to help clarify: 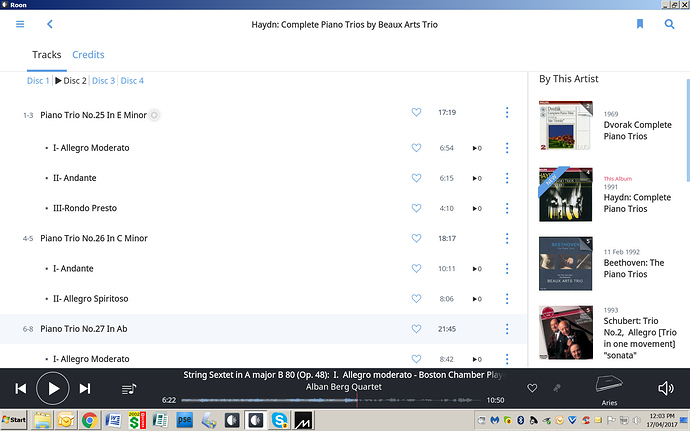 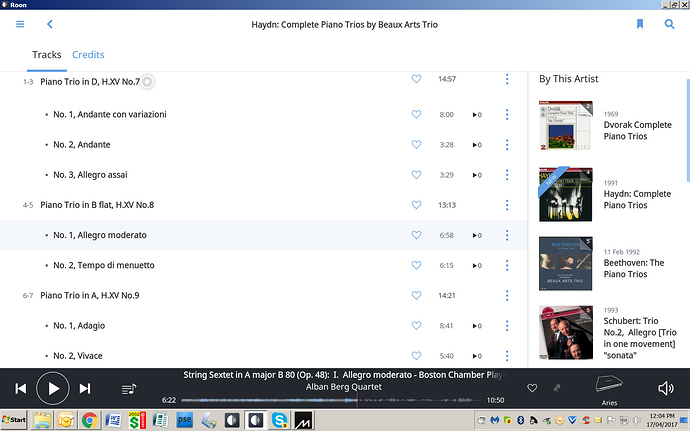 8 of the 9 successfully collated and edited but that one album refuses to merge with the others as a distinct album.

Thanks David, but maybe I’m too dumb, but I cannot see how either of these programs can help the challenges I’m facing.

The challenges may be being caused by inconsistent or wrong metadata in the audio tracks themselves. Then when Roon tries to make sense of it, it gets it wrong.

You’re trying to correct the errors using the editing functions of Roon, which as Carl points out, only uses its own database, and never, ever, alters the metadata content of the audio tracks themselves.

A better approach might be to use a third party metadata editor to tackle the issue at source - in the audio tracks. This will almost certainly help Roon to make much more sense of the albums.

This also has the advantage that if, heaven forbid, Roon ceased to exist somewhere down the line, the metadata would be present and correct for the next audio management system to pick up.