I’ve recently joined Roon and been enjoying it a lot last couple of months.
Thank you very much for sharing your experience and wisdom. It makes way easier for a rookie like myself to navigate through the world of DAC and DAPs

I assume, just like in a type of collecting - and I would say that being an audiophile is a form of collecting - rookies make mistakes. I’ve previously been collecting vintage watches and among watch collectors, there is a joke, that your first 5 watches will be considered as a poor choice and you eventually will sell it. For what it’s forth.

So I’ve recently sold my Azur 851N as well as Astell Kern DAP, yet keeping my LS50W because I like it a lot. Currently, I connect them with my mac mini i5 which I use as a Roon server as well and now as a streamer via USB-B, which is fine set up for now, IMO.

I would really appreciate if you criticize my imaginary(!) set up, which I would like to obtain eventually but instead of making few more mistakes, I would love to get your wisdom and expertise which will probably save me a sh*t ton of money

Speakers:
KEF LS50W (Which I already own and like a lot)

Steamer (not very certain about Hegel’s functionality, though could be wrong):
Bluesound node 2i

If I made a mistake in my scheme, please, correct me ASAP.
Any advice, harsh critique, stupidity notices and etc would be greatly appreciated.

P.S. Huge thansk to the members of this community for taking your time and explaining me some basic stuff. Helps a lot

Unless I’m missing something significant, the LS50W are active and can be fed wireless or wired ethernet, or usb directly from a computer. I think you already have everything you need. No DAC, amplifier, or streamer required.

Hey there! Yes, they’re a swiss knife in that matter and capable of all that mentioned above, BUT
Their self-steaming capabilities is a pure garbage, including horrible mobile application, IMO.
As I’ve mentioned above I’ve used them with separate external streamers and preamps, DACs etc and I like how they sound with extra stuff.
Therefore, I want to build a chain that will push me to the top of their capabilities.

If you want to go Chord, you might consider the 2go instead of the Bluesound, although it’s a bit more money. Another alternative would be Lumin D2. Hegel have been promising Roon Ready updates for their integrateds for almost a year now, which of course would obviate the need for a streaming DAC.

TBH the H190 deserves far better speakers than the LS50Ws.

I think ‘the top of their capabilities’ is likely to be achieved feeding them a digital signal by wired ethernet, and Roon is likely a good way of providing that feed while avoiding the iffy KEF app; but if you prefer the sound of an external DAC, a preamp, and the internal ADC of the LS50W fair enough and I’m sure there will be many suggestions!

Appreciate the remarks!
Thought about both 2go and Mojo. Still trying to better understand my using habits to define what’s best but appreciate pointing out to the right direction.

In regards of H190, I did thought about that. In fact, that’s the biggest audiophile’s issue - every time you upgrade piece of equipment, other parts might need an improvement too, otherwise it might be an overkill

Pretty much. I’ve tried all the connections LS50W offer and it’s safe for me to say, that I don’t like how they sound when I use internal streamer. Same could be said about their internal DAC. Azur 851N doesn’t have the finest DAC yet it sounded way better when I connected them via Audioquest RCA. So it’s adamant.

Looking forward to any suggestions!

Same could be said about their internal DAC

Probably also worth noting that if you are leaning towards Hegel, you should be looking at their preamps, not their integrated amps. You can’t use the power stage with an active loudspeaker and it seems an expensive option if you are only going to use the preamp stage.

I read this previously but couldn’t understood how’s that possible. Now it makes more sense, yet still confusing.

He wouldn’t be the first person to think that they were improving the sound of an AVR or a set of digital active speakers by putting a DAC in front and feeding them an analogue signal — which then gets converted back into digital by the (frequently cheap-ass) ADC built into the speakers/AVR and then from digital back to analogue by the internal DAC they claimed sounded lousy.

It is a testament to infinite malleability of human perception that prepending a “lousy sounding” DAC with an additional set of digital→analogue→digital conversions can “improve” the sound of said lousy DAC.

Speakers:
KEF LS50W (Which I already own and like a lot)

Steamer (not very certain about Hegel’s functionality, though could be wrong):
Bluesound node 2i

Seems like you have a bit of redundancy here. The Hegel H190 has a really nice DAC built it so I’m not sure if you need the Chord. It also has DLNA streaming so you could use it with Roon directly if you had a UPnP bridge or a sonicTransporter.

Chord Hugo 2 is a really nice DAC but the USB input is better then the SPDIF input so go USB if you want to use this DAC.

The Bluesound node 2i only has SPDIF out not USB. I would recommend a better player with USB like the ultraRendu.

You didn’t mention what you are using for a Roon Core Server. I would recommend a sonicTransporter as it has the DLNA bridge built in.

This way you could try

My guess is the last one would sound the best. But you never know the DAC in the Hegel H190 is very good. 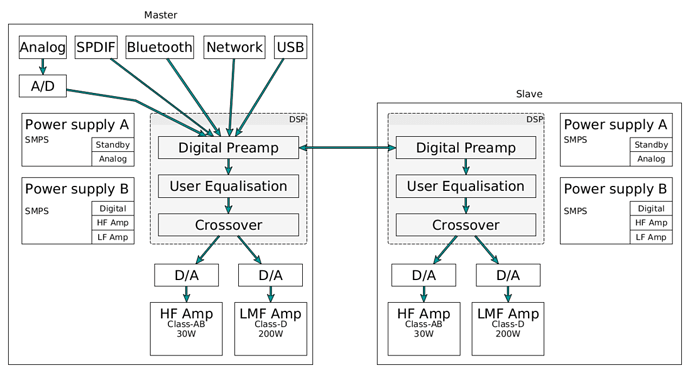 I forgot one more option. I have been told the wireless input on the Kef is not that good and the USB is better.

You could also try

I have a bunch of users running this setup and they say it sounds great.

if @Jacques_Distler is right and Im fairly sure what he says is true this is a way to keep the music all digital until you get to the DAC in the Kef. Also the Rendu would keep analog noise from going over the USB cable into the Kef sure make your sound even better.

Well, deduct all your knowledge and you’ll see – it’s unintuitive when you use analogue signal going to analogue input and don’t expect by any means additional conversion. It’s just illogical for a rookie like myself and many other I suppose as well.

Thank you very much!
I mentioned it above – I use mac mini i5 as my Roon Server and currently as a streamer to LS50W via USB-B. Works perfectly for my needs.
Ok then, what kind of speakers would you recommend then for h190.
Really appreciate the help!

Ok then, what kind of speakers would you recommend then for h190

If I ever purchase a pair of high quality speakers, I will purchase a quality pre-amp and amp to go with them. I want Nucleus to DAC to pre-amp to amp to speakers. With my Oppo 203 DAC, I think that would eliminate the need for a pre-amp. I just need two passive speakers and a stereo amp.

Well, at least 2 people already pointed out to the fact, that h190 is an overkill for them.
On top of that - new piece of information - such as digital to analogue, then again to digital, and then again back to analogue, performed by LS50W doesn’t sound really cool, unless I export digital signal from h190 which doesn’t make sense at all. Therefore, eventually I will have to replace them, since I’m kind of adamant about Hegel.

Do you intend to use the Hugo 2 as a portable? Are you using headphones? The Qutest performance is basically the same as the Hugo2 and you could pick up a dedicated headphone am with the cost savings, or just pocket the savings. If you are dealing completely with a stationary unit, you could save a little cash on the Chord DAC. If you need the Hugo2 for portable use, that would negate the Qutest proposal.