This may have been requested before.

Feature request: display the musicians of an album (with specific track information if appropriate).
This is available on wikipedia under the category “Personnel” for most albums.

If the metadata is there then it’s displayed under the Credits tab. The problem here is that recording companies often fail to curate performer metadata into a digital file and third party providers may not descend to Track level. Maybe one day Roon will be able to extract Track performers from liner notes.

Thanks. Performers by track is a valuable feature, but I understand the difficulties.

I think there are two issues here.

It is going to be difficult to address 1) as it is really part of metadata standards and QA issues in general.

But 2) is more a design choice from roon. Some of us have curated performer credits at a track level in our local libraries and prefer an “at a glance” 360 degree view on the main album page. Hiding what some may think of as clutter in the credits tab does not suit everyone. For example, it makes sense to me personally to hide the detail of production credits, but not performer credits.

It is possible to “promote” the performer credits to the main album page but it can be very awkward. For example, roon will hide a “Choir/Chorus” in the credits tab but not a “Vocal Ensemble”. I have a lot of Choral music so this is a problem for me, often having to add additional roles. But I find myself spending a lot of time adding roles to performers as by trial and error I have found out which roles roon will hide and which it will display. Much better would be a simple toggle, maybe like the composer toggle, so you can decide what level of performer visibility you prefer.

Have you looked at SongKong , this links with MusicBrainzand Discogs db And can often fill in gaps

Just noting that Track credits can be viewed under “View Credits” in the three dot menu next to Album tracks. I expect, but haven’t checked, that would include Performers if the metadata exists (including if curated by users).

I also like @tripleCrotchet ‘s suggestion of user controlled visibility for Performers.

yes… in most of my music, i have tagged performers at track level, and i’d like an “at glance” visibility.
to be more specific:
-if you click the 3dots menu you can see the credits, and that would be ok.
-the problem is that roon does not specify if they are “track level credits” or “album level credits”. this is a very important info
-the 3dots menu for a track can show the credits for that track, if any

there should be a way to compare them. clearly you cannot open two 3dots menu.
ideas:
-album level credits are always shown in the album page. so that opening the 3dots menu of a track allows a comparison
-track titles become … expansible menus, showing credits. option “expand all”.

in any case, there should be the possibility to show only performers credits, and not production credits

I have a recollection of @Ludwig commenting recently that he regretted that he had not argued more strongly for performer display directly on the album page rather than second removed in the credits page. Maybe someone has that link? I think a separate credits page makes sense where there are a lot of specialist production credits most people would only want to refer to occasionally. But I can’t see the sense of hiding performer credits there.

I don’t recall saying that, but my memory is weak…

You can bring any performer credit forward to the top level by adding a “main performer” track credit within Roon or in your metadata editor of choice. For me that solves the problem when it arises.

Hi @Ludwig, must have been someone else. I’ll find the link one day.

But maybe I have missed something (main performer) and that is why I am having problems but I think you meant “primary performer”? If that is the case I actually have exactly the opposite experience. There are two scenarios and the combination of the two means that I find that 9 times out of 10 I am deleting one or more “primary artist” credits just to get visibility of performers at a track level.

Maybe what I am missing is the main artist credit? I would sure like to avoid these additional editing steps if I could. The main thing is to have no duplicates and visibility on track level credits in more complex albums.

The way I’m doing it for “mixed bag” albums that cannot be identified (e.g. personal recordings) is to make the Primary Artist for the album as “Various Artists”, and assign both “Primary Artist” and “Performer” credits at the track level. This seems to work satisfactorily.

Thanks @Geoff_Coupe, but I am trying to describe a different scenario, different to a personal compilation or similar where there might be 15 tracks all with different artists. I routinely use “various artists” with both identified and unidentified albums as you describe in that scenario.

What I am trying to describe is what I find to be an extremely common scenario with both classical and jazz with identified commercial albums where there are a limited number of performers, maybe 2 or 3, but nevertheless their combinations at a track level on the disk are not obvious. In these extremely common cases, the albums are not considered “various artists” by the metadata suppliers and to be honest neither do I. Two problems arise:

I find this to be extremely common. And it is not just where I am unfamilar with the artists. I find this to be just as much a problem on “superstar” multi-performer albums where it also becomes almost impossible to guess who is playing what without going to the artwork or allmusic/discogs etc.

I could go on. I just find it extremely common and it results in a very specific additional roon edit above and beyond maintaining the file tags with a 3rd party tagger. There are at least two scenarios:

So the feature request is not about what are the editing workarounds, but why are these sorts of additional highly confusing editing steps so frequently necessary at all? I have only arrived at the workarounds by a very painful, frustrating and time consuming process of trial and error. Maybe a worked example will make it a little clearer. It is just an example. As I have tried to explain I personally find variations on this scenario to be extremely common. The bulk of my library in fact.

This is a very highly rated Naxos album (Penguin, Grammophone guides). One of my favorites. Had it for years. There are three Mozart woodwind concertos and three “primary artists”. It’s Naxos so the soloists are not famous. I certainly wouldn’t know who is playing what. So let’s try “Various Artists” and see what we get: 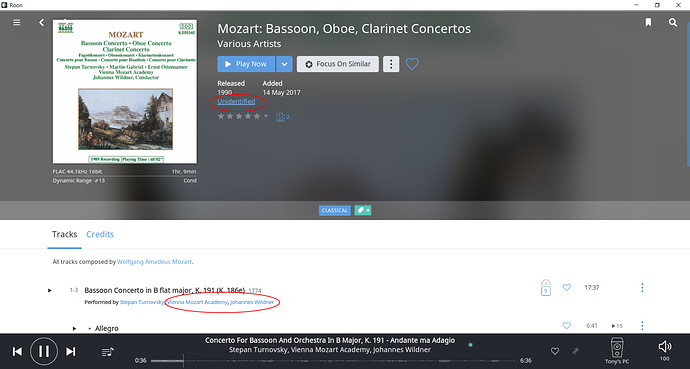 Although I have visibility of the Basson soloist (and also the clarinet and oboe soloists which are out of shot), there are two problems:

In order to raise the conductor and orchestra up the “hierarchy” so they are “all tracks performed by” I know from experience that I will need to explicitly add “orchestra” and conductor tags. So let’s do that: 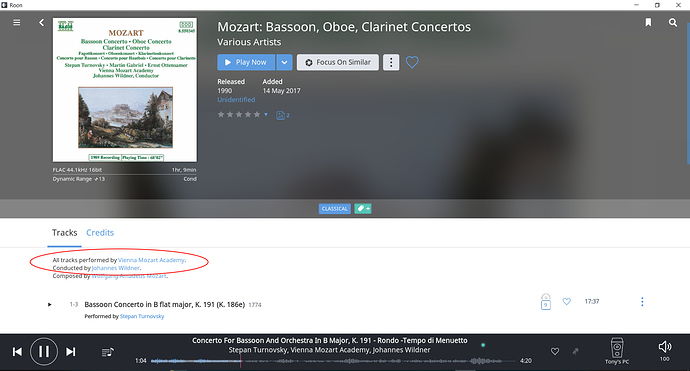 But this is still not what I want.

So lets put the soloists back so that I can get an album ID: 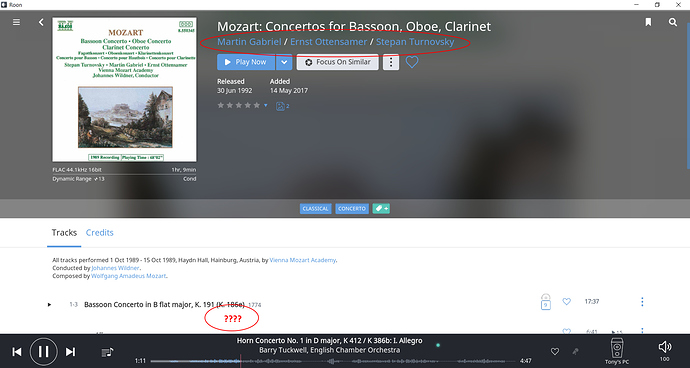 So now I have some additional information about where and when the Basoon concerto was performed (album review missing though as seems to happen in most cases) but I don’t know (unless I look in the credits) who performed it! In this case what I normally do is I uncheck the primary artist(s) but make sure I have the album artists set, then I get this: 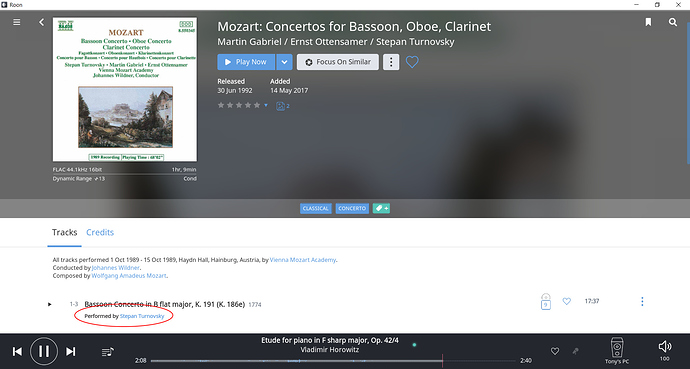 Finally, I get a 360 degree, at a glance view of the album telling me everything I want to know (except the review) in a way that makes sense to me. But this is an awful lot of work above and beyond all the manual tagging I used to do in my files. It is only one scenario. The end result is I often find my manual intervention with roon much higher than with other players. There are many similar other cases. I find myself editing almost all but the simplest albums in this sort of way and I would prefer not to. To me this is what this feature request is about. Finding a way of avoiding all this extremely common manual intervention. My experience is that I am doing it for the vast majority of the commercial albums in my library not just a handful of personal compilations or obscure live bootlegs.

Thanks for the detailed explanation, Tony. Very helpful. Hopefully it will help the Roon devs to improve their design for a future release.

Tony you’re absolutely right that album with, say 2 principal performers as album artist, with each work performed by one or other of the 2, are not well handled by Roon. But if I understand correctly you’re missing something. You seem to be manipulating your file tags to change to Various Artist, and losing the identification which you basically need.

I think you need to leave your file tags as they are, get your identification, then edit in Roon to Album Artist=Various Artists. Then in most scenarios I can remember, the relevant track artists will automatically be brought forward for each performance.

Having edited in Roon, the edit will not be written-over by future metadata updates, which is important to know.

Forgive me if I am misunderstanding!

Thanks Ludwig. I think there is a miss-understanding. I do not edit “various artists” in my tags. In the example above I am playing devil’s advocate. It is not something I do. But I don’t think it matters where “various artists” is edited, file or roon.

Extending the above example to include editing “various artists” in roon rather than file leads to 3 choices for album artist. I usually choose 1 or 2 (whichever is more informative), whereas it sounds like you usually choose 3.

What I find is that the key editing step (which I would rather not do) is still to untick all the primary artists in roon. If I don’t do that and choose option 3) above, all I end up with is this and the artists are not promoted to a track level: 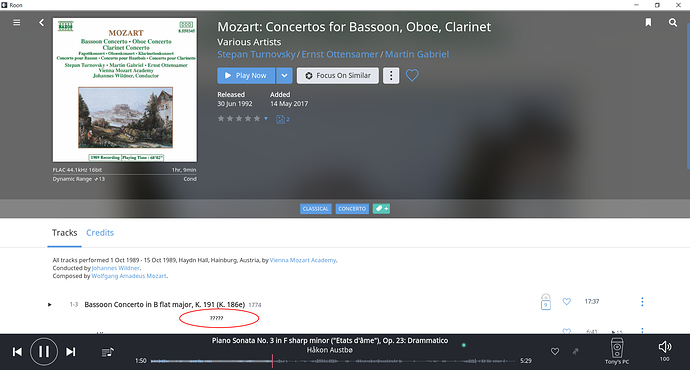