or at least make it optional. It isn’t right now is it? Couldn’t find it.

It takes center, and won’t leave or be put to the background during startup. Not to mention it states various ‘wisdoms’ we can do without. Roon shouldn’t bring about the experience of Nag-screens 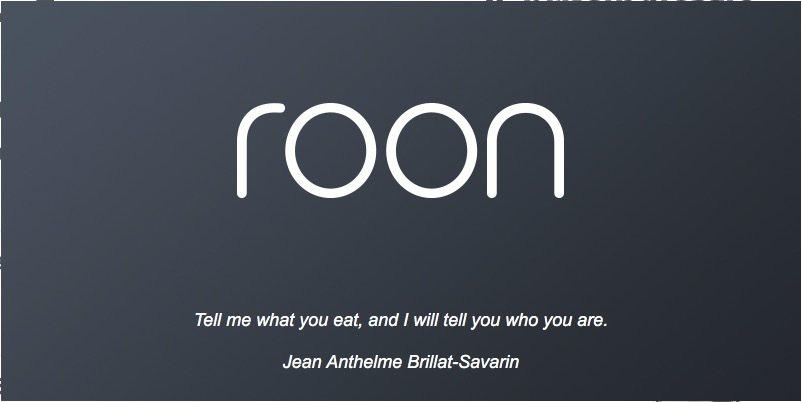 I just want to listen to my music…

I for one quite like the little quotes flying by.

But most importantly – it’s not a nag screen really. Roon is loading in the background, with the quote screen disappearing as soon as Roon is ready to play. Speed-wise, there’s nothing to be gained by removing it.

it’s not about speed, it’s about screen real estate.

On a somewhat slower computer, the screen is nagged with these quotes, and user has to wait for the screen to disappear to get back to work

To each his own, sure, thats why i suggested an optional startup screen.

I have the opposite problem. My Macbook Pro loads Roon so fast that I can barely read the quote. I actually enjoy reading the quotes and wish there was an “X” button that I could click after I finished reading.

it’s not about speed, it’s about screen real estate.

Real estate to stare at a blank screen whilst Roon is loading?

I like the screen and enjoy the quotes, as has been said, the program is loading anyway. If a machine is that slow to make a difference, it won’t run Roon anyway.

not quite right, Roon runs fine on my MacBooks. Admitted, a lot quicker on my new Air than on the old but trusty Macbook Pro, but after starting up, it runs alright.

If it weren’t only for that nag screen…

Don’t think this is about stating what everyone likes or dislikes, i just asked whether it could be made optional. cool if you enjoy the quotes, enable it. If you don’t, disable should be an option. Just a Tidal is an option. For which i am grateful.

no.
not to be forced to watch to quotes, or take current work out of focus.
A status screen isn’t necessary per se. Some like, some don’t: please make it optional.

Lol, Zoom, cool. another take on it, nice

maybe we can have it both indeed.

Yes, it shouldn’t be a hard thing to implement.

Currently, I am far more concerned with the differences in SQ between Roon and MPD on the BDP-1.

It’s not a nag screen:

nag screen - Computer Definition. An advertisement in a shareware program that routinely asks the user to
register and pay for the software. Although it generally pops up at the beginning or end of the program, it can appear at certain intervals as it is being used.

It’s a startup or splash screen. What benefit would removing it give? It’s only there for a few seconds anyway. Like zoom25 says (as as I have mentioned around a year ago), I would like it to stay a little longer so that I have time to read the quote. If this delayed Roon startup then I wouldn’t want this, though after it disappears, Roon still takes a few more seconds to load.

On my Macs, the splash screen hangs around for a few seconds. The real problem is even if I switch to another app immediately after I launch Roon, the splash screen covers the UI of the app I’ve switched to. I have to wait until it goes away before I can use the rest of my computer. It floats above all other apps.

Please reduce the z-order of the splash screen’s window. This is probably just a bug.

exactly,
hope they can fix it.

I don’t mind having an option to not have the splash shown, but note that startup will take just as long.

We show the splash because loading Roon takes a while.

Can we have some new quotes in the next update?

I think I have seen them all.

Either make it optional or program the screen not to take center focus .

Cheers, and thanks, Marius

Can you fix the issue that switching apps leaves the splash screen in front of all other apps?

That’s my issue too… I’m using an older iMac as my work desktop so Roon doesn’t load in “just a few seconds” and it means I have to sit and stair at the splash screen instead of continuing to work while Roon loads in the background.

I don’t mind having an option to not have the splash shown, but note that startup will take just as long.

Yes please. It may take just as long, but it won’t render the screen unusable in the process if you can switch off the splash screen. (I’ll be happy to see the end of the quotations too…)

I was tired of the quotes also.

In the AppData\Local\Roon\Application there is a folder with a name made up of 9 digits. Each upgrade will change this number and also bring back those quotes.

However I do not update very often. If it is ok and working fine I leave it alone.
Anyhow in this folder there is a file called “quotes.db”

First make a copy of this file as so you can revert back to it in case you need to.

Edit this file with Notepad
Example - DSS Roon Version 1.3. (build 234) stable(64bit).
There is a . (period) at the end of the sentence. If you study the original db file, then you see the format that is used. You then can either make up your own quotes or like I did was to make 1 quote which gives me the same screen every time.

I hope that by exposing this that Roon does not try to circumvent my hack.

Again every time you perform an update, then these quotes will be back.
MD