Please make “Add to library” and “Add to tag” available for bulk edit.
Also, bulk edit “Add to favorites” would be useful. 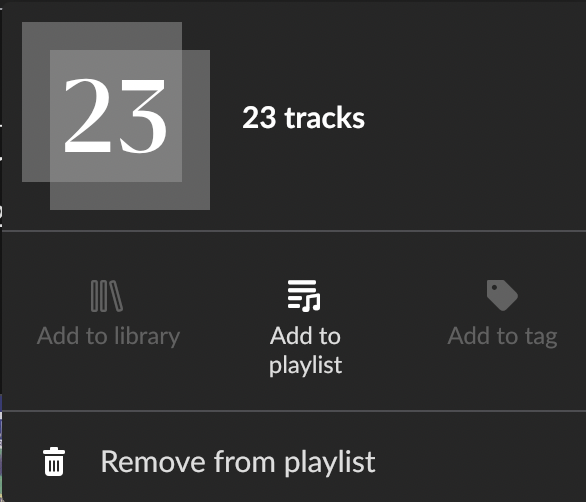 What do you mean by bulk edit?

As you can see in the screenshot I have selected 23 tracks of a playlist. But the buttons “Add to library” and “Add to tag” are disabled. I can’t bulk edit (in software the functionality to change multiple selected items with one action) the selected tracks.

Running Windows 10, I can Add to Tag, but not to library.

Are any of the tracks already in your library?
The first screenshot I’ve selected a track already in my library which switches off the add function.
In the second only non library tracks so add to library is available.

Non of the tracks are tagged though.

The problem is, Roon does not show me which tracks of a playlist are already in my library. Without seeing them, I can’t exclude them when selecting the tracks to add into my library.

Playlists are one of the poorest areas of roon. The bare minimum was put in place years ago and never updated or expanded on.

I see the problem. It’s had no occurred to me as I never put tracks into my library but only whole albums. (It seems to me that Roon is generally album-centric, adfing a track results in the whole album cover being added anyway, so adding only single tracks does not seem to achieve much)

So I guess it’s not a feature request to add bulk editing, which already exists, but to fix an issue that can prevent bulk editing because the items in the selection have different states, and this state is not obvious

Just found the possible main issue/bug that causes the ‘not showing if added’ state problem.

In my playlist, it seems like the track Ode by Nils Frahm from the album Solo wasn’t added to my library. There is no value in the Date added column.

When clicking on the album icon it leads me to the Qobuz version of the album. Also, there is no indication that this album is in my library. But there is add (+) button. 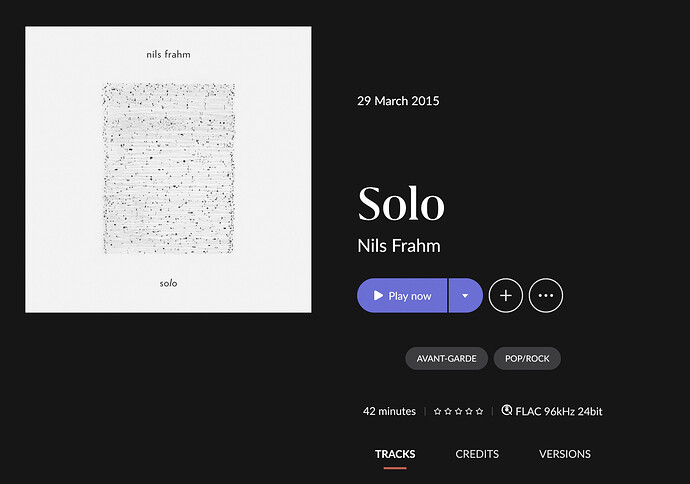 When I click on Versions, it shows me two versions of the album. 1 Qubuz and 1 Tidal version. Here it suddenly appears that the only Qobuz version is already in my library and to be my primary version. There is no second Qobuz version of this album.

If I click on the album, the album page suddenly shows me the same album version as added to my library with an added date value. 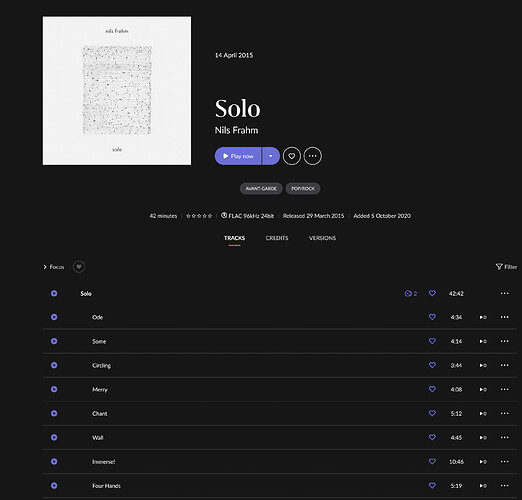 It’s not a bug, but it can be confusing.
Once you add an album to your library, Roon creates a separate logical instance of it and you can edit it to your heart’s content. Although the audio is unchanged it may now have different titles, artists, composers and so on.

You can now view your library version or the Qobuz version and need to be careful which gets added to a playlist as Roon will maintain the distinction.

It’s kinda messed up then. If the playlist shows the not library version, the add to library button should work.

Whatever the technical reasons are, adding or tagging a complete playlist or a multiple tracks of it, does not work in many cases. I understand that there technical reasons for this behavior, but this does not change anything on my wish to implement this function.

Some “if then else logic” would do this trick to make tagging and library management more user friendly.