So we have a Versions tab where Roon shows us various versions of what it considers to be the same album in a tab. We also have a duplicates filter. Why? Let’s see if I can put it to any use…

I’d like to dedupe my collection to the extent I’m happy to delete louder versions of an album where the louder copy has the same or lower resolution as another version. Roon makes that a needless chore of diving backwards and forwards to gather information it already knows about the albums but doesn’t display where it would serve a genuine purpose. 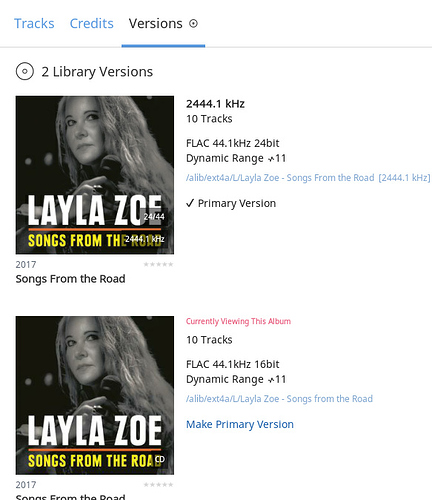 Great, I have two copies, different bits per sample, same sample rate, same DR score. Which is louder though? Not sure, lets see if Roon can tell me.

Righto, now we have the album loudness for one album, let’s rinse and repeat for the other

Ok, I have now seen the album gain for both albums…but damn, I forgot the score on the first one…I’ll have to rinse and repeat again.

Seriously folks, surely we can do better here? It’s a single data point and probably a minute’s coding… adding it to the Versions info for each version makes a hell of a lot more sense than the workflow necessitated by its omission? 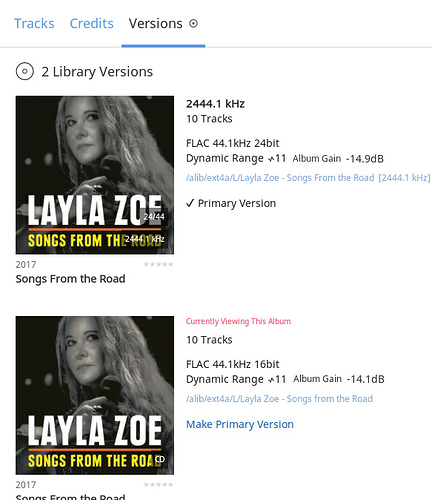 In my experience, album gain is not an indicator of the sound quality of an album. Dynamic range is more useful but is still not definitive.

For example, some albums have the exact same mastering and dynamic range but different peak levels. As long as there is no clipping (peak is no higher than 0dB), the sound quality is identical when played at the same sound pressure (volume).

What is really important for sound quality, is the mastering itself. Album gain and dynamic range don’t replace listening to the music itself.

For example, I have two versions of Boston’s first album, “Boston”, on CD. One CD is the original “Japan for USA” release and the other is slightly later release made in the USA for the USA market. Both CDs have a dynamic range of 8. But the USA CD plays 3.5dB louder than the Japan CD. So which should I keep? Well, based on the loudness, I should get rid go the USA CD. But, that would be a major mistake as the USA CD has a much better sounding mastering. It’s not even close.

I could find many other examples.

As a side note, the opinion on what mastering are better are not mine alone. That is the consensus over on Steve Hoffman’s forum which is well known for being the place to find the best masterings on vinyl and CD.

I am not against more information being displayed if it is useful information. I certainly wouldn’t decide which version to keep based solely on the DR and album gain. So I can’t say it would be all that useful to me.

I agree it’s not definitive, especially when talking about classic albums that have had many makeovers over the years, but together, DR and album gain are often quite telling when a version has significantly lower DR and higher gain as would be the case for “remasters” released at the height of the loudness war madness. Numbers you’re quoting would make me listen to decide, some I’ve seen would simply make me hit the delete button.

I hear you. But, I am quite familiar with the CDs in my library and I would never make a decision to add or delete an album from Roon based on those criteria. For me, the mastering is the key and DR and loudness don’t tell me what I want to know. Having said that, I know to avoid the highly compressed and overly loud CDs that are a product of the loudness wars if at all possible. Most of my collection is classic rock from the 60’s and 70’s, Jazz, and Classical so it is usually possible to avoid those terrible CDs.

Having said that, I know to avoid the highly compressed and overly loud CDs that are a product of the loudness wars if at all possible.

I learned that one the hard way after buying countless remasters of favourite albums only to be disappointed time and time again.

It should be mandatory for albums to be sold with R128 DR disclosed.

For example, I have two versions of Boston’s first album, “Boston”, on CD. One CD is the original “Japan for USA” release and the other is slightly later release made in the USA for the USA market.

You have posted this incorrect info at least twice – here and at Steve Hoffman Forums.

There is no “original” or early CSR Japan for US “Boston” pressing. The first “Boston” on CD was an early DADC pressing, circa 1986. That is a US disc.

The Denon Japan for US is an overflow pressing from around the same time or slightly later 1986-1987. DADC could not keep up with rapidly expanding demand and farmed out CBS Records label capacity to other pressing plants in Japan and the US.

Whether or not the USA for Japan in the first US release or not has absolutely nothing to do with the topic. On Hoffman’s forum there are many posts other than mine that suggest there was a Japan for USA release before the USA for USA release. You want to argue that, argue it over on Hoffman’s forum because it adds NOTHING to the conversation here.

Whether or not the USA for Japan in the first US release or not has absolutely nothing to do with the topic. On Hoffman’s forum there are many posts other than mine that suggest there was a Japan for USA release before the USA for USA release. You want to argue that, argue it over on Hoffman’s forum because it adds NOTHING to the conversation here.

Well, Scott, “Boston” has nothing to do with the topic here. But you injected it into the thread. Tit for tat.

Sorry, but I do not find you to be as knowledgeable as I and some others are on early CD pressings. In this case, you are disseminating incorrect info. And that is not good for anyone else reading here or elsewhere. So, I am going to correct you.

For the record,“Don’t Look Back” has the very early and rare CSR Japan for US pressing. You may be getting confused on that point.

Keith Hirsch is not the be all end all when it comes to CD info. In 1985 there were plenty of CDs sold in the USA that were made in Japan for their first runs because the US had not ramped up CD production capacity like Japan had. Keith may very well be correct here. Regardless, if he is correct or not, it matters not here.

The two Boston CDs I mentioned, regardless of their release order, are indeed quite related to the topic of this post. They, along with the Pink Floyd “The Wall” CDs I mention, show that DR128 album loudness and dynamic range are not hard and fast indicators of sound quality.

I think the dynamic range computation used by the DR database is more useful than R128 DR or album gain numbers for showing which albums are compressed.

When you see disks with a DR Database DR at 5, you know it is compressed. Roon reports the dynamic range of the self-titled CD “The Band” (original USA release) at 5. But the DR database DR number is 13. My wife just bought Carrie Underwood’s “Cry Pretty” CD. It has an R128 DR of 7 and a DR Database DR of 5. It is a highly compressed and loud CD. When you listen to these CDs, the DR Database numbers are much representative of what you hear.

I would be ecstatic if Roon would give us the option of see the DR Database dynamic range number. Getting back to the original request, I would not be against having the DR and Album gain numbers displayed as requested.

I’m with the original poster here that I would love to see Roon make better use of this information – not only on album level but also on track level. When having several versions of one track, I would love to quickly be able to compare the compression info to distinguish between the tracks.

The information is there – let’s use it!