I do not like to have the end of one item overlaid with the start of the next in classical items. For popular it is fine but annoying in classical. One needs to catch one’s breath between movements as they usually create a different mood so the gap is important for full appreciation and enjoyment of the music.

Perhaps an option to define - no gap or a 2 second gap would be enough to avoid the long gap in some recordings or no gap at all that obviously many like.

Certain classical works need gapless. For example, consider Beethoven’s 5th symphony. Adding a gap between the 3rd and 4th movements ruins the dramatic transition between the movements. If a gap is desired, shouldn’t the mastering engineer already include it? For example, Mahler’s symphonies by San Francisco Symphony have appropriate silence at the end of a track before the next one starts.

So, an option to include a gap may benefit a few recordings, but mess up many others.

It should be an option (metadata) track by track.

I do not quite understand your post. If you are listening to an continuous album, there is usually a pause between movements and no pause where there shouldn’t be one. Roon plays back exactly as the CD was / is.
Do you mean mixed playlists?
But gapless is extremely important for classical music - there were times when we all craved for gapless in digital music… They are continuous works - many did not understand why people wanted gapless - since in pop it is not needed except for Live or concept albums. Yes I am always for choice, but please explain what you mean.

There is NO gap between tracks on an album and yes, the same thing happens with random play. I had a visitor here this afternoon listening and he commented adversely on this. It needs to be an option as it seriously detracts from enjoying the music…

are you talking about crossfade rather than gapless? maybe have a look athe settings here as i suspect you are getting a little bit confused 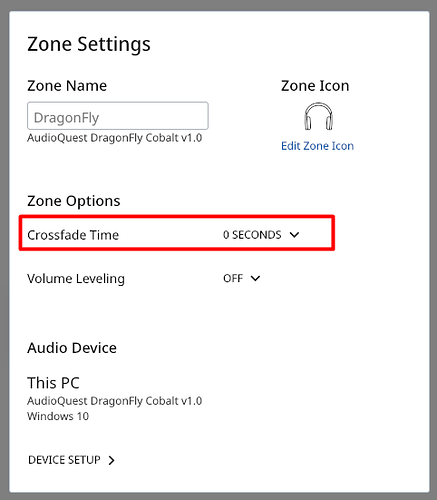 It would be extremely irritating to listen to an opera or choral work with gaps. Such works may have 50 or 100 “tracks”, some only a few seconds long, that should play absolutely continuously - apart from the breaks between acts in an opera. There is often a modest gap between movements in recordings of symphonies, true not as long as a concert, but then there aren’t retuning noises either! If you need more the pause button will do it. Or you could even make a playlist with little tracks of silence between the movements.

Thank you - that is the answer BUT crossfade should only have affected the bleed of audio from left & right channels and should not have had the affect of removing gaps.

Yes you are right - what is all I needed was to have the music played back as presented on the album initially. Gasps in operas would drive mer crazy too.

You’re thinking of crossfeed, where you ‘leak’ sound from one channel into another e.g. left into right and vice versa.

Crossfade is where you have two separate tracks simultaneously playing. At the start of the crossfade period, Track A has a relative volume of 100%, whereas Track B has 0%. As you move through the crossfade period, the percentage share changes, until you get Track A: 0%, Track B 100%. Think when DJs fade between tracks.

It does mean you get both tracks playing at once for a short period - hence no gap (unless there is a significant recorded gap at the end of Track A and the beginning of Track B).

Yes, of course you are right. The difference between “feed” and “fade” is significant.

We never stop doing so!

Gap less is for me the good way for live recordings in one take. With streams of studio recordings I miss the 2 seconds gap that there is in CD’s and LP’s.
(In fact when burning CD’s in the old times one could make a choice of the gap between the songs going from zero to many seconds.)
Edwin

Maybe if Room included tool tips for its functions, there would be less confusion, as this app is very particular about where, in its almost indistinguishable screens, you click a function. For example, I keep trying to add a specific track to my library and end up adding the entire album it’s driving me crazy. Overall I’d like Roon, but it can be a confusing mess especially for new users. Yes you’re right there is an important distinction between Crossfeed and Crossfade but why not just call it by something similar to it’s commonly referred to name (ie Gapless Time or Length, etc …). Tooltips would help a lot