Just noticed that my HDTracks downloaded 24/96 copy of the Adele/Bond soundtrack single ’ Skyfall ’ is not appearing in my Roon Library and is not available on Tidal at any resolution either . My other half loves the vocal performance on this and we do have it available on both Squeezebox and Sooloos . Just curious as to why it won’t appear in Roon ?

Hi ~M~,
I have this version from Tidal in Roon and have just checked to see that it still plays ok, which it does.
(My better half is also a big fan of this track.) 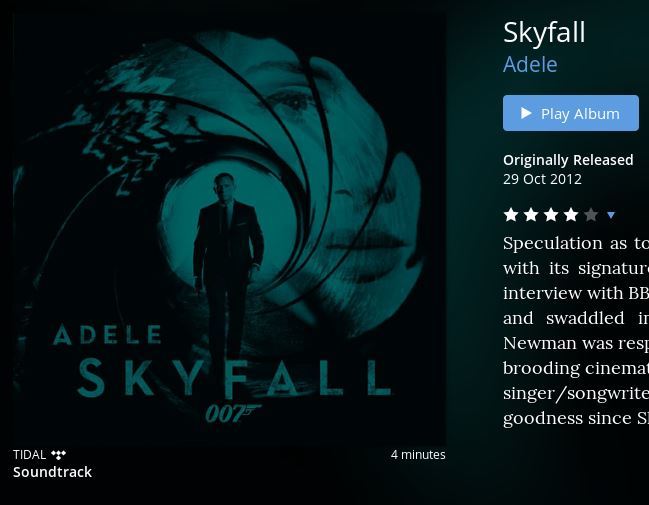 What do you mean its not available? I see it in my library.

We currently have a problem auto-identifying this one. It’s probably under “Jenna Hoff” (who covered this on The Voice Germany). You can fix this by manually re-identifying it. We need to stop the mis-identification happened in the first place… Sorry about this.

Thanks for that , Joel. I do indeed see Jenna Hoff listed but none for a single by Adele called ’ Skyfall’. The file , though , is a mystery to me . It was downloaded from HDTracks and imported into Sooloos , where , to this day , it appears correctly and plays perfectly . It was also added to a Squeezebox library and , finally , into Roon .

I copied the file into tagging software ( Metadatics on Mac ) and it appears as ‘Duchess’ by Genesis from the album ’ Duke ’ !!!

I will edit the Roon metadata and artwork .

All edited and cleaned up now . One final curiosity though , my Tidal collection within Roon still does not list the ‘Skyfall’ single in any form yet if I open the ’ Tidal app separately , there it is !

@Moonloop It’s probably been marked as a duplicate as it’s lower quality. Try clicking on your 96/24 version of Skyfall and see if it’s there under “Other Versions”.