If you mean you lose connection to Core, then you need to fill in the most important part about your setup. If that isn’t what you mean, then be more specific about what is the problem.

To get help solving, what seems to be a network issue, you need to describe your network.

I see that I screwed up in filling out the original form and the networking data didn’t make it in. I need to better read forms. Speaking to a human might be more effective

I have an Eero 6 mesh. The core is et 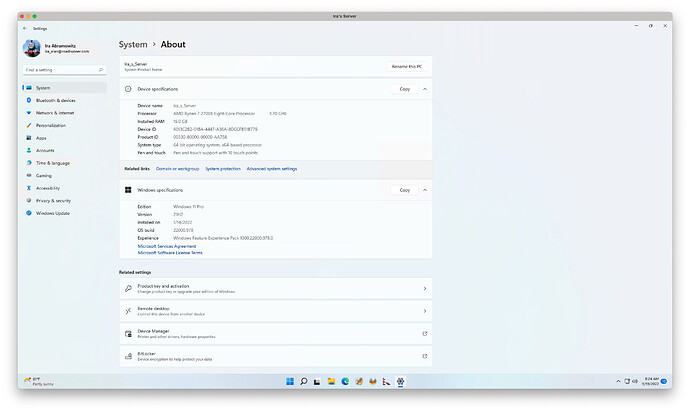 The PC that hosts the core shows a downlink from the internet of >300 Mbps and the iPad shows ~200 Mbps, so my guess is the intranet is working fine

Additionally, I have used the App on my Mac mini which is connected via ethernet (through a switch) and it too had a problem with the core.

I just enabled diagnostics on your account and am seeing connectivity issues in the logs. This error is a recurring theme in the logging:

The IP that I am hiding is your core. I just ran into this issue and suspect a full power down of your network (including all mesh nodes) is in order.

Power down modem/router/all nodes. Bring them back online and in that order. Afterward, restart your core and try again.

Please try and let me know. I’ll look forward to hearing from you.

Thanks for the speedy reply.

I performed the reboot and waited for each unit to come online before I turned on the Roon Core.

Since rebooting a few minutes ago I did have one searching for core notice on my iPad, but I am writing that off for startup.

Let’s give this a few days. I didn’t notice this until a couple of weeks ago. Otherwise Roon connectivity has been excellent. My primary playback is through a Raspberry Pi 4 hat that provides coax digital input to my Denon receiver. My hardware, including network hardware has not changed, but firmware from eero has certainly been auto-downloaded

I hope this holds. Our topic will remain open for a month so if there’s a change, let us know. Please provide the date/time and what you were doing or playing if the issue remains.

Wellthe problem persists–in and around 2:12 PM PDT, playing My Defenses are Down from Annie Get Your Gun from Qobuz

I can try to connect my server by wifi. Right now I am output via ethernet to one of the eero nodes

I love your idea. Give that a try and let us know.

Alternatively, connect it directly to the router instead of ethernet via node or Wi-Fi for a true test as to whether or not nodes or wifi are the culprits.

The core is now connected via WiFi to the network. I turned off the ethernet port as well. So far (10 minutes) performance seems to be fine, albeit internet speeds measure lower than with the ethernet connection from core to an eero node. I use testmy.net to measure internet speeds

Let’s leave this open and assigned to me. If any issues occur please report back. It sounds like you have a handle on what the culprit is. Maybe someone else will chime in with some best practices too. Lots of people use Roon and Eero.

Performance is holding well using wifi. I finally added my wi fi antennas to the motherboard. Previously (ethernet connection into an eero node), I would lose transmission to the RPi-based player and of course I got nasty-grams on my iPad.

Now, I do not see that the iPad has lost the Core, although I see the symbol that the download from the core is not instantaneous. Possibly this has to do with album cover caches—I’m above my pay grade here. This is infrequent. I have not lost the signal.

Pings between my Core machine and my iMac Mini (on ethernet) are mostly below 10 milliseconds. I don’t know if this means anything for this issue.

If I should have problems I will move my Core up to the Router eero module and connect via ethernet (through a switch), but I am not sufficiently motivated now to continue trouble-shooting if I don’t have to.

I still receive the message “Waiting for your Roon Core”. Often continuing with a not about a connection problem.

Presently I have my PC (Core Computer) ethernet-connected to a switch, which is directly connected to my router.

Earlier, this was connected via wifi to an eero node that itself was connected to the eero router node via its secondary wifi. Performance on Roon is only slightly poorer (if that) than the direct connection

I replaced the iPad with a Kindle–same result

Initially, I ethernet-connected the Core to the eero node (which still had to connect to the eero router). This was the worst connection and the sound stream was lost at times.

This behavior is recent–in the last few weeks.

The latest configuration (ethernet to router via switch) has ping times of under a second and download speed from the internet is >300Mbps–comparable to my ethernet-connected iMac Mini.

Previously, on wi-fi, the download speed was ~160Mbps. The difference (I guess) is a measure of of the slower wifi, but it still is able to support a substantial rate, which I hope is sufficient intranet speed for the Roon Core

The ping time is spectacular and I am certain that a 160 Mbps connection is sufficient for this setup. Internally on your network, your ISP’s connection speed doesn’t matter so long as the router is a GB-capable router.

The 160 Mbps connection is just an indication of the throttling by the wifi.

However, my main issue is that I am still getting many “waiting for Roon Core” messages, which I hadn’t before. This still suggests that the Roon Core is not up to snuff