@mark_perrin - if you are adding metadata using a third-party metadata editor, then of course it will end up as metadata in the local files themselves. If you are using Roon to add metadata, then Roon does not modify the local files in any way - all edits are contained in the Roon database.

If, in the future, you want to dump Roon, then you can Export your local files, and Roon will then, and only then, add the basic metadata into the exported files

what’s the excuse for it not tagging Kate Bush? Not EDM and nothing obscure here. 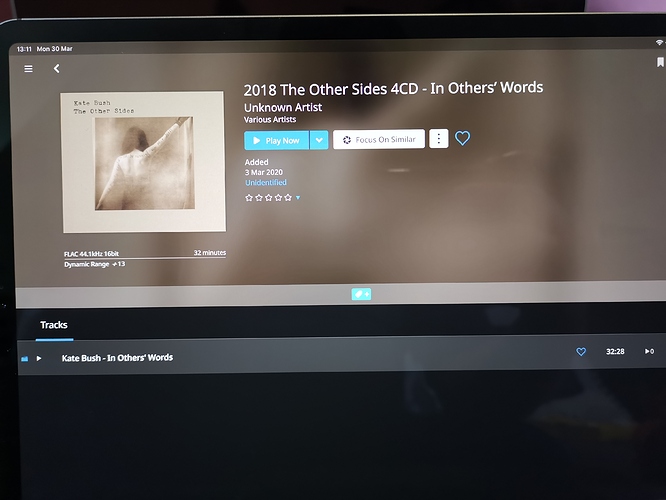 no excuse for not having tags for this 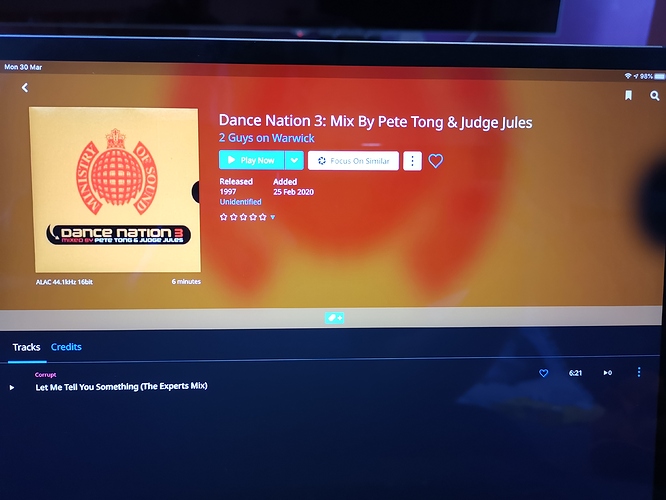 Click on the "Unidentified"link and see if you can help Roon identify it.

It looks tagged to me - what’s missing? It’s got a single track at 32 mins long and it’s all fully titled unless I’m missing something?

The MOS one is fully tagged too- got the album, artwork and track including specific mix? Date of release too

Roon says “Unidentified” - so it hasn’t been able to find a match in its database in the cloud. When this happens, it falls back to looking at the file metadata and uses that. 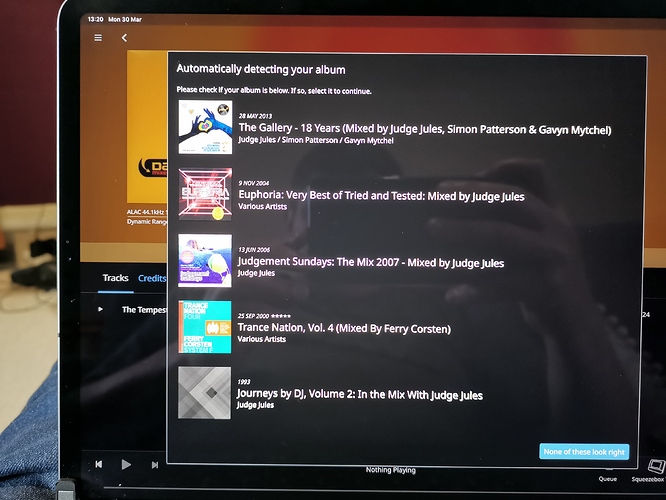 Are they commercially bought cd’s or copies. Only asking because if they’re copies some of the cd data used to tag may be missing.

And if you click on “None of these look right” - can you help it a bit further?

That’s the info I tagged myself. Roon isn’t cross referencing it or doing anything useful with the info like it does with Eurythmics or other middle of the road stuff.

As mentioned above I find it has extra info in about 50% of my dance/electronica but it doesn’t bother me.

Depends what you’re using Roon for though. For me it’s a library management system that ties together my local stuff and the streaming services and allows me to play anything back on any endpoint I have.

The extra info is nice when it’s there but it’s no biggy if not. Imo, ymmv etc applies

I can’t see why it wouldn’t easily find a well tagged middle of the road MOS release. there’s no excuse for that. even when it finds some of the albums it splits them into multiple albums with random tracks. Regrouping them seems to be a learning curve all within itself which I’m struggling to figure out.

The question is though is of you’ve tagged it already what are you trying to get Roon to do that hasn’t already been done.

All my electronica is auto-tagged at ripping stage and Roon picks the tags up from there. What mileage is there in getting it to do it all again?

I may well be missing something of course…

I thought the point of roon was that it uses the metadata to cross reference with other albums to help discovery. if it isn’t tagged then it won’t work.

even when it finds some of the albums it splits them into multiple albums with random tracks.

Sometimes you’ll find that Roon has marked these albums as “Unidentified”, which means it has done its best to import the tracks and group them into albums using the file metadata. If the metadata has errors, then this will likely trip Roon’s import process up. Other times, there may have been multiple releases of a particular album, often with varying numbers of tracks, and Roon has identified the wrong release.

You can merge splits into a single album quite easily.

Yes agree that if it isn’t tagged then discovery doesn’t work. Generally not so much of an issue for me on electronica as I have so much to go on through the years.

) but not Trade Vol 3. So it certainly can find data on obscure stuff just not everything.

As I say for me it doesn’t matter - I have enough knowledge of that side of things anyway and rarely use the discover feature for it because I doubt it would find bootleg Squire of Gothos mixes anyway and it has guided me to plenty of stuff I didn’t know was available on Qobuz (the entire Shiggar Fraggar Show set for example).

But yes, if this is a make or break feature for you then perhaps give it a miss…

lol I have those JDJ albums too

I have very nearly the complete set but am missing 14 I think (they didn’t do a 13 for superstition reasons) as well as all the International ones and DJ Rap - Journeys into Jungle - an offshoot they did just one CD of. JDJ International - Westbam Ich Bin Ein Bassliner just about takes it but vol 12 - Triptonite takes it - the Tomislav CD from that is just brilliant.

If you have the whole CD as a single track glued together it’s no wonder it’s not identified.

I can’t find a 32min track on this album.

Kate Bush - The Other Sides

As @freelancr pointed out, that Kate Bush track seems a bit odd at 32m:28s long. As it happens, I’ve just bought The Other Sides on CD, and used Roon to rip the 4CD set. That 4th CD has 9 tracks, which totals 32m:24s: 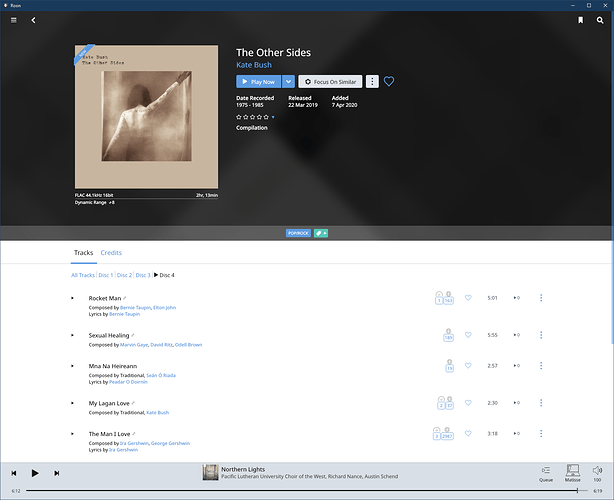 As you can see, Roon knows about this release.

Full disclosure: as I said earlier in this thread, Roon sometimes needs help to identify the correct release, particularly with boxsets. Once I had used Roon to rip all four CDs in this set, it had matched one CD, but the other three were not identified: 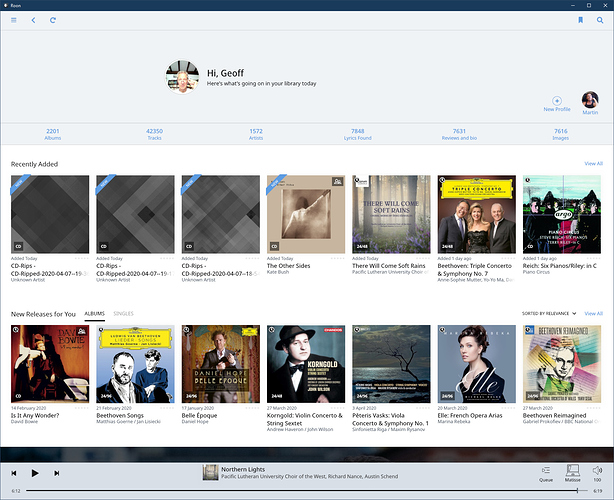 So I selected these four albums and merged them into a single boxset: 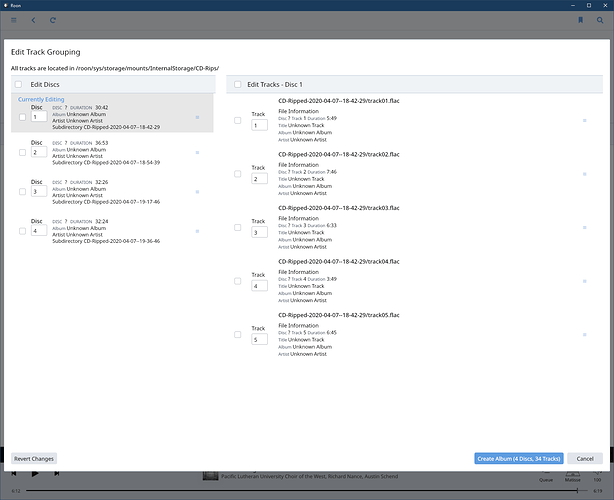 Roon then tried to identify it, but came up with the wrong box set: 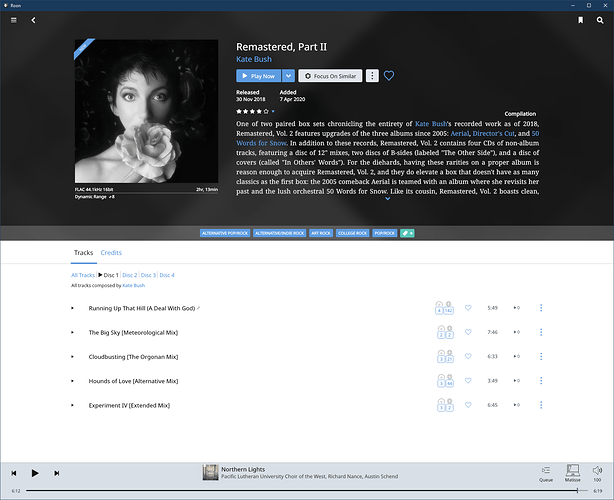 I then told Roon to search for Kate Bush as the artist and "The Other Sides"as the title, and it found the correct release: 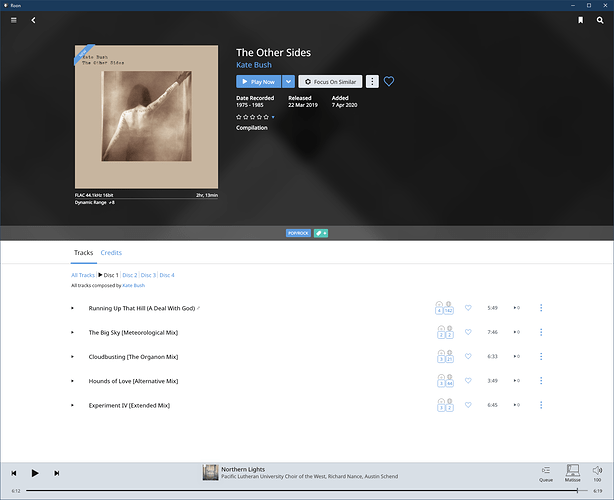 Roon 11691720×1400 289 KB
2 Likes
Double CD issue: CD2 not identified
Ripping my CD's to new Nucleus. Problems with albums that have multiple discs
Problem ripping 2 CD albums
1 Of recent onset is not being able to scroll through my albums. 2. Multiple albums not identified! or upgraded in quality. 3. Stuck in radio
← previous page