I have been using roon for a few years now and have encountered a new problem. My computer is both the source and controller for Roon. I run music via Tidal and an external harddrive to my dragonfly red DAC, and from there to an LCX headphone amp. The amp also has a built in SDAC dac that I have used in trying to diagnose what’s going on.

I get occasional and very annyoning crackles and pops in my music. I can’t remember when I first started noticing this, but at first, I thought it was an issue for plugging my DAC into a noisy hub instead of the less but still noisy USB port as I had for years. At first I thought that fixed it, but now the popping is back in full force, both for streamed and local files. I used Tidal from my phone to determine that the problem is not my amp or the headphones themselves, as running audio from the phone to the amp sounds clean.

I have also tested listening directly from the Tidal App instead of through roon. And weirdly, while my Dragonfly Red has problems, the SDAC is pop-free.

I don’t really know where to go from here. It seems like there is at least a problem with roon since Tidal app > SDAC > Amp sounds fine, but Roon > SDAC > Amp does not.

Any help would be appreciated! I’m a bit at my wits end.

Breaking this up into a few posts, since new users can’t post enough images or links to make my topic comprehensive. (POST 1) Ok guys, let’s kill this one off. I see a bunch of similar complaints on the forums regarding TIDAL tracks crackling, though the symptoms seem to be all over the place. I love Roon, and something like this is really a killjoy. I’ll try to provide as much specific data as possible, since I know there can be a number of factors in this sort of issue. Let me know if there…

Core Machine (Operating system/System info/Roon build number) Build 521. Network Details (Including networking gear model/manufacturer and if on WiFi/Ethernet) Audio Devices (Specify what device you’re using and its connection type - USB/HDMI/etc.) NAD C658. Description Of Issue Suddenly Tidal MQA albums are making crackling sounds in Roon. I don’t know whether this is due to Roon 1.7 Build 521 or on the new software update of my NAD C658 In Roon: Qobuz and Tidal (non MQA) are sounding j…

I’m a novice technically, so it is hard for me to parse some of these discussions, especially since my set up is so much simpler than what most people are running. I could not find a solution that made sense to me in these posts. The latter suggested updating the remote app worked; I have updated Roon a handful of times in the past few months and the popping has persisted.

The first thread then linked to another thread which suggested an update of roon did the trick.

But again, I may just not be reading these right to find what I need.

How is your power delivered. On you on a busy shared circuit, or possibly in a multiunit dwelling. Is the issue only specific to listening to Tidal stream?

I am in an apartment; and for whatever its worth, this is a new problem that materialized without any changes in the power delivery to the computer. And streaming Tidal music directly from the Tidal app doesn’t have this problem.

I do not only get the issue in Roon with Tidal. It also comes up with local files stored on an external hard drive. When I play those files via foobar (again to the SDAC) I get no popping.

Puzzling for sure. Thought you might have a dimmer or a motor on circuit.

Ahhhh. No. The power is coming from a surge protector though—I’ll try running it from the wall in case power might be an issue.

Don’t drive yourself nuts. It could be a Roon 1.8 rollout issue and that will get resolved on its own (hopefully).

Wouldn’t hurt to take a look at your USB Dragonfly connection. Canned air is cheap.

Can you share a screenshot of the Signal Path when playing to this particular device?

Does it happen with other endpoints? If you play to System Output of a remote, for example, does that work okay?

Hi Dylan, sorry for the slow response! Did this image come through ok? It happens with both DACs I have connected to my PC; I don’t hear any popping on the SONOS sound bar I have linked in to roon (but I also might not notice minor popping on it).

In general, I have found that resetting the computer mostly fixes the problem temporarily. (Mostly but not always; maybe 4/5 times it fixes it; 1/5 times it almost entirely fixes it, but not quite.) The problem gets worse when other applications (like zoom) try to gain control of one of the endpoints. Then even when I return control to Zoom, I get popping.

Also to clarify: I have tried multiple IEMs/headphones when there is popping just to make sure the problem isn’t there; it isn’t. I have also tried omitting the Amp that I have in the system; that didn’t solve things either.

One last note: it doesn’t sound like “noise” sometimes does—like the low grade jitter that you can get if the DAC is plugged into a noisy USB hub or something like that. It is occasional, random pops. 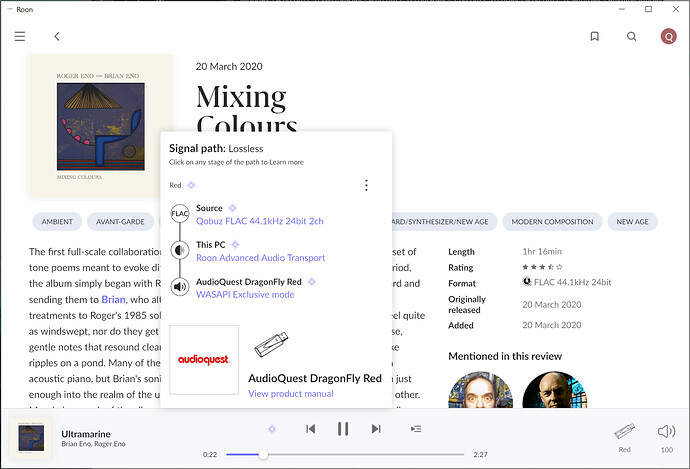 One other thing that may be of note: Roon much more regularly “loses control” of my DAC. It used to only happen if I opened up another piece of audio software or accidentally tried switching my computer’s sound output to that DAC; in the last few weeks (I can’t remember if this is since the update or before) I have noticed it losing control for no obvious reason.

Hi, checking in on this @dylan. Unfortunately, I now seem to have a new problem. Roon won’t load at all on my windows 10 machine. It is stuck on the loading screen with the logo; I tried uninstalling and reinstalling and still stuck. Is there a way to get support in a more direct way than the forums? Thanks!

Tagging @support in case that helps (not sure if that’s what I’m meant to do; hope it’s ok). Here is what I still am currently stuck at after two reinstall attempts and multiple PC restarts. (I have been using Roon for years now without an of these problems arising.) 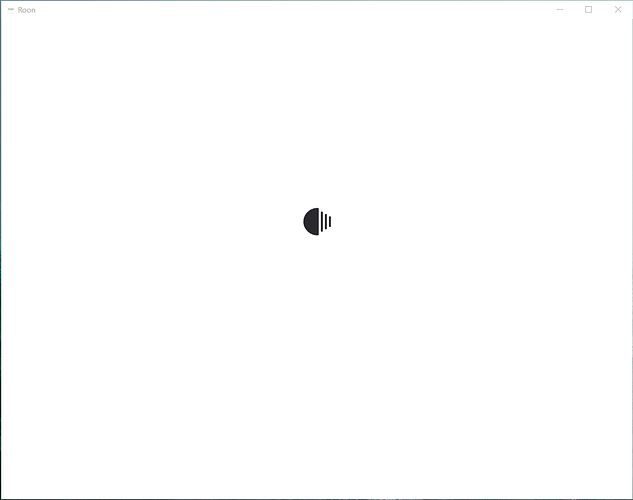 I was able to get things fixed eventually by uninstalling everything including settings and database files. Now the clicking is (for now) gone, and roon opens fine.

I want to just flag that at this point I am pretty disappointed with the @support on offer given how much I spend on Roon. For some of us, the $100 a year is a pretty hefty investment and one well worth it given the product, when it works. To have my initial requests ignored for two weeks now after one (helpful!) note from @dylan will definitely have me think carefully about whether I should continue my subscription.

. Many thanks for your efforts.

I’m very sorry about the experience you’ve had with Roon support at this time - while it hasn’t been what we had hoped for, it’s also not the way it usually works. This has been an unprecedented time for us - pre and post Roon 1.8 release - and we’re learning a lot from the experience. Response times have been longer than usual and we are sorry for the wait.

I’m hoping you will enjoy Roon this year and that we’ll get more chances to engage in conversation. And better and faster interactions too