I am using Nucleus+ with an internal SSD. While the vast majority of tracks are imported just fine (about 50,000), about 10 whole albums are not, as shown in Settings / Library / Skipped Files. The reason given is I/O Failure. The tracks are normal m4a files. They play just fine in iTunes, Fission, and MacOS. There is nothing abnormal in file permissions, including those for their folder.

Even weirder, if I simply copy the album folder to another folder, this new folder is imported and plays just fine (for example, folder “L.A.G.Q.” is copied to “L.A.G.Q. 2”). If I delete the original folder and rename the new one back to the old name, and rescan, Roon again skips the files.

I think I identified a common feature among the problematic folders: their names all end with a period, “.”. In fact, the Roon Skipped Files view does not show that period when it lists the skipped files (though MacOS shows it when the SSD is smb mounted on it).

I’ve moved this across to the Support forum, for the @support folks to take a look at this issue.

I thought I I’d check my library. I can confirm that this isn’t an issue for me. My Roon Core is running on Linux and plays these files. I use a Mac and iPad for control.

However I note that Windows didn’t play ball when I ripped most of my collection, so I had DBpoweramp replace certain special characters to an “_”.

Here are some examples with .. I tested:

BTW … (three full stops) should be an ellipsis … and this is okay to use in file names.

Would it be possible for you to create a zip archive of one or two folders that Roon missed on import and share them on a service like dropbox? Feel free to send me a personal message with the share link. If you do not have access to a service like dropbox, I can provide you an upload link.

yes, i will do that as soon as i return from a trip next Tuesday (remote desktop does not work for me well). as a faster route to a test case, my I suggest you rename one of your music folders from “WHATEVER” to “WHATEVER.” , and rescan the music tracks. this creates a problem for me, running Roon server on Nucleus+ and using an SMB mounted internal SSD on a Mac for renaming.

My previous Roon server running on a Mac didn’t have this problem.

Posting this to report a bug. Did a search but nothing popped up. Since installing Roon i have noticed that i was missing 24 tracks in my library compared to my jriver library. Tonight i was determined to figure out which ones they were and after finally figuring out how to export a list of my tracks in Roon (option in the + sign if anyone else is wondering) i was successful. Apparently if a folder starts with … Roon will ignore it. Like many people my files are organized with an Artist\Alb…

back home! here’s the dropbox link to the problematic folder (“L.A.G.Q.”):

it is not even compressed.

Unfortunately, in order to test the media properly, we will need the folder to be compressed into a zip file. The Zip file will encapsulate the folder and file names exactly as they are stored on your computer, which is important in this case. I took one of the files you uploaded and put them in a folder named “L.Q.G.Q.”, and Roon was able to successfully auto import the file.

I tried testing this on my system… Interestingly Windows 10 will not allow a folder name to end in ‘.’ so that was the end of my testing.

I have the “LAGQ Latin” album, but in my case I have it within a folder called “Los Angeles Guitar Quartet”

To clarify, you are using an SSD you installed aftermarket for the storage of your library, and not the included boot drive storage, correct? Can you take a screenshot of the storage tab in settings? Did you follow this process when setting up the drive?

yes, i used an aftermarket SSD for the library, not the boot drive. the SSD was installed using Roon instructions, including formatting via the “Nucleus” web page before copying the files to it. I copied the files to SSD using ChronoSync running on my Mac (on which the SSD was mounted via SMB or CFIS). The music files came from another disk on the Mac that contains the reference copy of my music files. Please see two snapshots attached here. 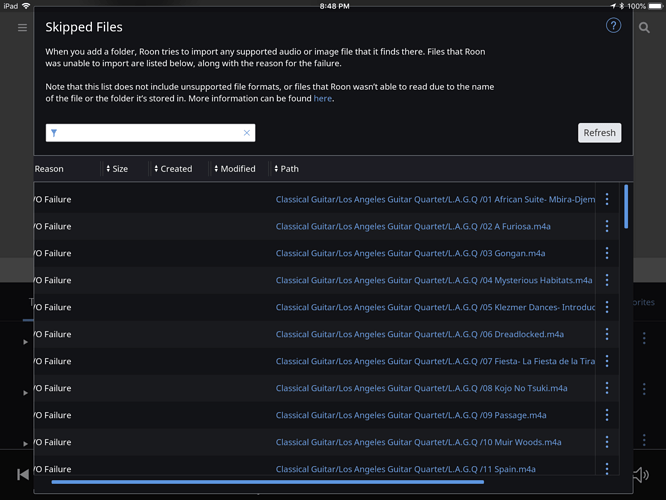 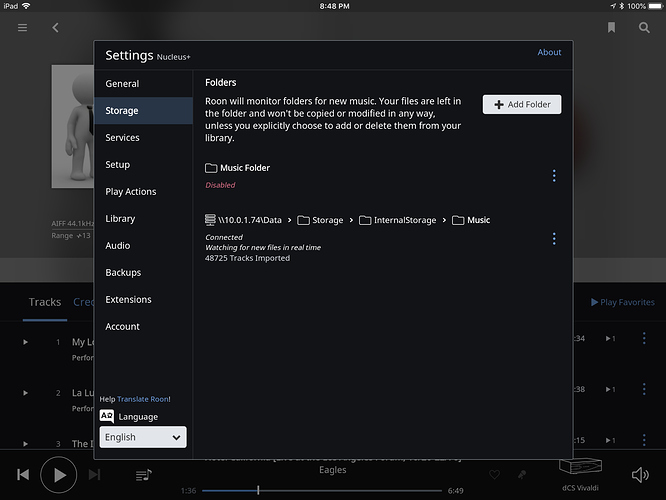 I think I have an idea of what’s going on here. Lets try swapping your SMB watch folder for the Nucleus’ internal storage mechanism. In the last screenshot you posted, “Music Folder” is actually RoonOS’ metaphor for “Internal Storage”. We are making a change to an upcoming build of RoonOS that will make this more obvious to users. While using SMB to query your internal storage should work, as you can see you’ve run into some of the limitations of the SMB protocol with the folder path IO error.

Before swapping out the folders, I would make sure that you are up to date on your Roon backups. I’ve included a link to the backup guide here.

Once you’ve ensured that you’re backed up, I would disable the SMB watch folder you have listed in storage. Once you’ve done this, I would then enable the “Music Folder” and if everything has gone right, Roon should quickly scan your library that you transferred over and rematch your files to the existing database.

Yes, this did the trick!