I am seeing this behavior in build 988 both in the Windows remote as well as the Android tablet and phone remotes. I definitely didn’t have this in previous builds, though I am not sure when it changed.

I don’t see this. The new info is immediately shown.

Just tried this with “Add to playlist”. Worked fine for me.
EDIT: Windows 10 Remote.

Thanks. Weird. Mine is a Samsung Galaxy A and a Motorola Moto G8 Power, both Android 10. The Windows remote is running on Wine/Linux, but as I have the same on the mobiles, that probably does not matter.

Thanks, but I can’t see the playlist link in your screenshot because it shows the playlist view. I mean like this, after adding a track to a playlist while viewing the album. In my case, the track is also added to the playlist, but this is only visible after leaving the album and entering it again. 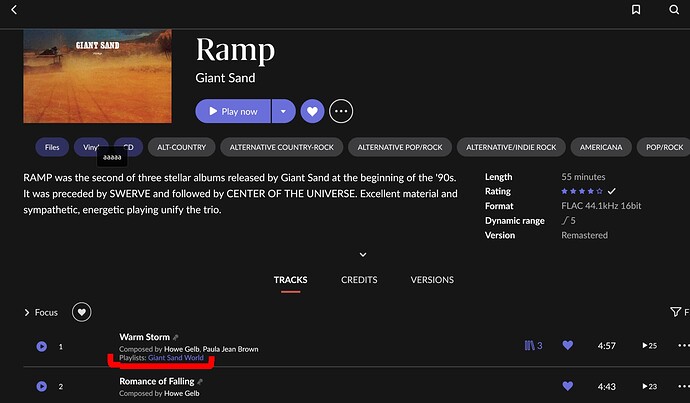 @Suedkiez , apologies; I added the screenshot.

Thanks. So weird, this always worked for me normally until recently, and now the same on 3 different devices

@Suedkiez , I just tested it with Playlists that are owned by me, as well as “Shared” Playlists. I can’t make it error.

Many thanks. One of these things. I’m sure it will disappear just as magically