Mini’s internal gigabit ethernet into Cisco gigabit switch (I don’t have the model offhand, and I’m not near it). Synology NAS containing media also attached to said switch, mounted to the Mac Mini

This happens with any connected device or connection type, wired or wireless.

When uploading a new album folder with multiple discs (each disc in their own folder inside the parent album folder), Roon in some circumstances no longer shows all the discs, and displays a seemingly random (often not Disc 1) single disc, and no amount of in-Roon Rescanning will fix it.

I expected all the tracks to be scanned and shown within the Roon UI.

The bug will always occur if the disc folders have arbitrary names, even if prefixed with “Disc N” (ex: Disc 1 - Dawn to Dusk; Disc 2 - Twilight to Starlight

Hope this isn’t changed before roon re-engineers box-set navigation. There are many feature requests going back at least 4 years now to improve box-set handling so clearly it has an extremely low priority.

You may not have come across this but many Classical and Jazz box sets can run to 30-60 CD’s, are often 100 or more CD’s and in extreme cases more than 200 CD’s. Essentially this makes the current roon box-set UI un-navigable. 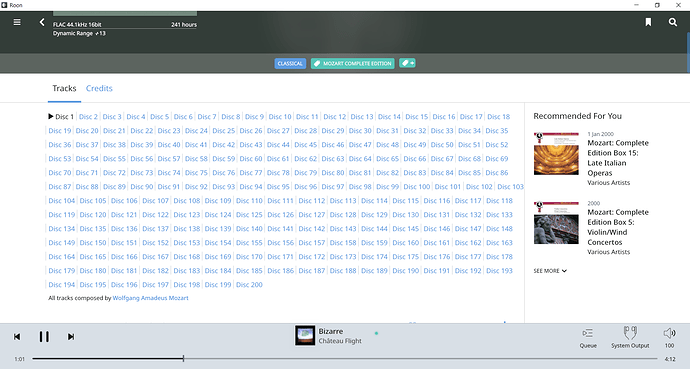 One common work-around is to use the “feature” that roon does not usually recognise CD folders with descriptive title text (as in your example) as part of the same box-set as a deliberate strategy to split the box-set into individual albums with individual art-work in roon.

As you point out this splitting of the box-set does not usually happen when the CD’s are simply named CD1, CD2, CD3 . . . etc. (or similar) without any descriptive text in the CD folder names. In fact in the knowledge base this is the recommendation. If you are expecting roon to support box-set clumping and identification then the knowledge base specifically warns that you should not organise your box-sets with descriptive CD folder names.

Roon Knowledge Base - FAQ: How can I ensure multi disc sets and box sets are...

You can always “merge” split box-sets by highlighting the individual albums and using the “merge albums” feature in the album editor if it is important to you to both retain the descriptive folder names and then navigate the box-set as a single album in roon. 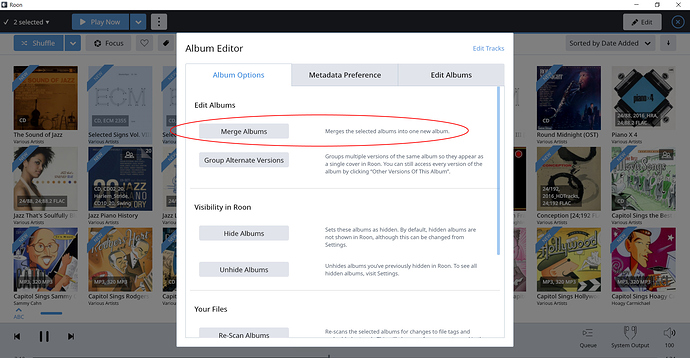 That is, it is usually not necessary to go through the deleting, re-naming, library clean up and re-identification work-around process you describe. Sometimes roon does get confused and that will be necessary, but a simple merge will work in most cases (provided you have numbered the disks in your tags).

There are many, many feature requests, going back many years asking roon to improve box set handling and navigation. This may never be addressed. In the meantime, to my knowledge, the feature that roon (in general) handles box-set identification differently depending on whether there are CD folder descriptions or not has been there since at least roon 1.2 and maybe before. In the absence of a proper fix for box-set handling (and scaling in general in the UI, eg. composition handling), the present compromise at least provides some flexibility. It seems to be a good example of one man’s “feature” being another man’s “bug”.

I think you’re missing the point of my bug report. The bug isn’t about whether or not the UI is unusable with a large number of discs in a set, nor is it about personally categorising subfolders based on a name. This bug is new, introduced with the new build, that causes Roon to mishandle albums that happen to have subfolders, and that manually changing the files/folders on-disk no longer triggers a re-scan/reveal in the app as it used to in prior builds, and that a ‘scorched earth’ workaround is needed to get it working again.

Strange. I am going through the process of re-importing a largish library I first imported about 2 years ago and I am not noticing this issue (although I have noticed other changes). I have several copies of that Pumpkins album and cannot reproduce your issue in Windows 10. Maybe there is a difference with MacOS?

If I understand you correctly, your issue is that albums with sub-folders are no longer handled correctly by roon and that renaming labelled CD folders in multi-disc sets is not triggering a re-scan? I am not seeing this and cannot reproduce it. One possibility is I have a different naming convention to you and others probably also have different variations also. So for example, I will number disks 1/5 rather than 1 of 5 as that is what my tagger (mp3tag) does when it autonumbers albums. I also use a convention CD1, CD2 etc. rather than Disc 1, Disc 2.

As expected, roon does not group the CDs into a single album. I then tried renaming the folders (Windows 10) to:

This triggers a rescan and roon groups the CDs and identifies them as a 5CD release.

Initially I thought this may have something to do with my different disk numbering and naming conventions. So after clearing the library I repeated the exercise numbering the discs 1 of 5 etc. and labelling the folders:

Maybe there is another difference. IOS vs. Windows?

Is there any files in particular that trigger this issue or does it not seem to be dependent on file type? Does the issue occur only with FLAC or MP3 for example?

Can you please share a few screenshots of the process you use?

What happens if you try the same process and have the files on the Core local HDD instead?

I’ll see what I can do this weekend.

As for the local drive, I don’t know, as I don’t have a Roon Library on the boot drive of the Mini (Core) (I’d have to add one).

It doesn’t seem to matter re: file type. These were FLAC files, but it happened with another multi-disc collection that I originally had as MP3s but then replaced with FLACs. That’s why I sent in the bug report… it wasn’t just that first incident.

Thanks for following up!