“Music is an experience, and Roon reconnects you with it”

Excluding other social media sites, I’d really like to connect my listening experience with followers by being able to post directly to Twitter - for example the current artist/album/track I’m listening to etc. Is a Tweet Button likely to feature at some stage in the future?

Hi Maree,
I can’t comment on having a Twitter (or Facebook button for that matter). However Roon does support scrobbling to LastFM, which is a dedicated music focused site.

Thanks, Carl. Yes I already scrobble to LastFM but was wondering specifically about Twitter as there are times when I’d like to share with others what I’m currently listening to rather than a stream of listening information. Of course there are numerous social media sites but I’m assuming a direct tweet that states for example, current listening wouldn’t encroach on copyright issues and such… and an automatic mention of @roonlabs couldn’t be a bad thing?

Thanks for your replies. Something along the lines of: 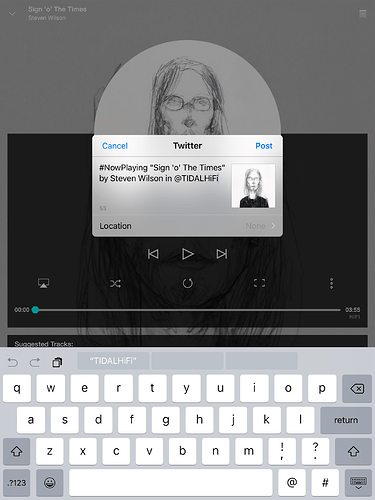 Hi Greg, I don’t have Tidal so I’m not familiar but yes, that sort of thing

is there still no way to share songs on social media like we can inside of Tidal?

@danny besides indeed that awesome share functionality (twitter, facebook etc.), It would be great if there would be some kind of community based sharing purely inside the Roon ecosystem.

Discovering new music that you don’t have in your collection can be a lot of fun, and being in contact with other Roon users can help with that.

RadioParadise.com internet radio has an internal ‘ecosystem’/community of users posting comments about songs if you want to see what that functionality looks like. fyi… https://www.radioparadise.com/rp_2.php?#name=Forum

example link to user comments per each song on the playlist: https://www.radioparadise.com/rp_2.php?#name=songinfo&song_id=43922