Pressing "add next" in the last seconds, does not actually play that song, while still showing data for that song

When I add song using “add next” the last second of the current song, the song gets added to the queue, and seemingly starts playing. But it is not! Instead the previous next song is played instead, while showing data for the song that should be played.

When elapsed time is mismatching (and longer), the counter just continues beyond the total time of the assumed track (for instance 3:27/3:07). 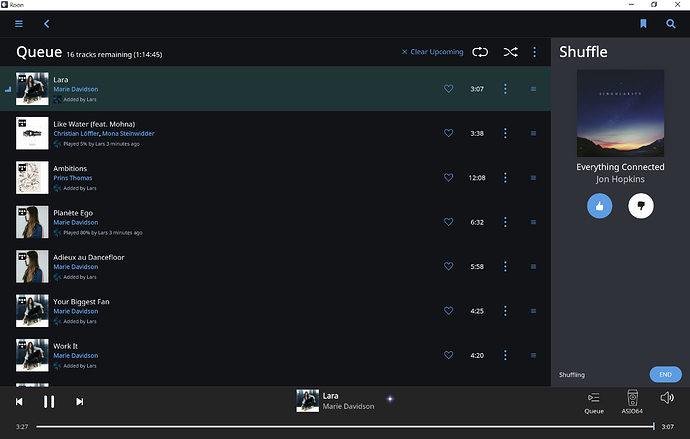 In the attached example, “Like Water” is played, while showing data for “Lara”.

I’ve seen this too in my setup but haven’t been able to reproduce consistently.

Hi @Lars_Hansson — Thanks for the report!

I’d like to enable some diagnostics on your account so our technical staff can get some more insight into what’s going on here.

Daniel Avery - Glass, should be played,
but Weyes Blood - Everyday, is played instead.

I wanted to touch base with some good news, which is that our technical team has been able to reproduce this behavior and we’ve opened up a report with our developers.

While I can’t say for certain when this issue will be fixed, getting things reproduced in-house is a critical first step, and I will keep this thread up to date as the team passes along feedback and work begins to get this resolved. Thanks again for the report!