Just out of interest, why would you want duplicate tracks in a playlist? Just wondering if I’ve missed a different use for playlists as there are loads…

If you look upthread, I detail my use for duplicates.

I would argue that the same track from different sources are not duplicates; Roon should be smart enough to recognize different versions of a track and not treat them as dupes if necessary - it has the metadata after all.

Vote in. I’m rather surprised Roon has not added such a basic feature to playlists.

A valid use case could be tracks that have been remastered, sometimes these are quite different to the original masters. Case in point, The Doors 50th Anniversary remasters. The original masters are far superior (imo) but it could be nice to have both versions on a lengthy playlist.

Regardless, I’d still like Roon to ask something similar to what Spotify ask: “This song already is in this playlist, add anyways?”.

Another option which could possibly work would be a “Duplicates” button in the playlist to filter duplicates for curation.

I learnt something today. Thank you

that’s a big help, thanks for the tip…!

Maybe for you, but for the majority of people it’s not like that.
Roon is designed for a large music collection. if you work on your playlists over a long period of time, how can you know what you have already put in or not.

All music players have come up with this conclusion so far - except for roon.

Users doesn’t have to be forced to one or other solution, there can be a config setting if you like to be prompted when you are adding duplicate entry to playlist.

It is something but I’d say it is more like cumbersome workaround for missing basic function.
As a user I don’t like to remember to enter every playlist periodically and check manually if I’ve added duplicated entries to my playlists.
I much prefer to be prompted when I’m adding duplicate to playlist (prompting can be enabled/disabled in Roon config).

Hello, just sharing my support for this. It seems like such an obvious and simple feature - i can’t understand why it has not been implemented with all of the support i see here.

The ability to show playlists a track is already included in underneath the title when viewing an album would also be great! 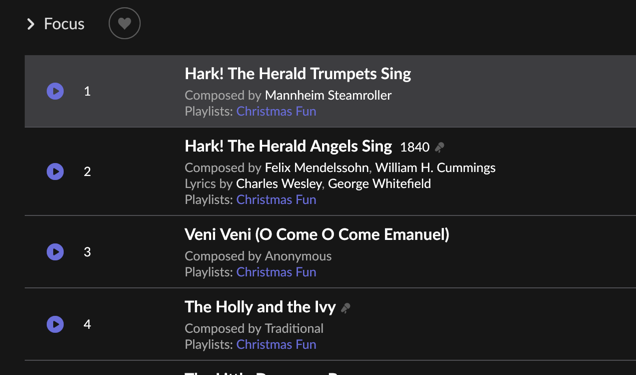 I didn’t know that was already an option!

I keep coming across little gems like that from time to time.

I think that only works if the album you are looking at is in your library doesn’t it? I often find albums I know have tracks in my playlists and the playlist isn’t shown - usually when I have added a track to say a ‘favourites’ playlist but didn’t want the entire album so didn’t add it to the library.

The majority of my playlists have duplicates. It’s my choice to have whatever I want in my playlists, as often as I want it. Having the software prohibit this is just bad design.

I have no concern about making such a feature optional, but outright prohibiting me from doing what I want to with playlists is ridiculous.

Every playlist already has the option to show duplicates. This topic can be closed.

I disagree, this topic is about prevention of duplicates rather than the management of them afterwards.
However, I do see the case that different versions of a track should not be considered as duplicates and if that can’t be well defined then it should be optional.