The majority of my playlists have duplicates. It’s my choice to have whatever I want in my playlists, as often as I want it. Having the software prohibit this is just bad design.

I have no concern about making such a feature optional, but outright prohibiting me from doing what I want to with playlists is ridiculous.

Every playlist already has the option to show duplicates. This topic can be closed.

I disagree, this topic is about prevention of duplicates rather than the management of them afterwards.
However, I do see the case that different versions of a track should not be considered as duplicates and if that can’t be well defined then it should be optional.

Dont want to “clean” all of my Playlists afterwards for possible dups.

So do an MD5 hash of local files for comparison.

Where’s that feature option please? I can’t find it.

the above is indeed helpful, but all it does is finds duplicates already added to a Playlist - I think the nice feature would be, when in the act of actually adding a duplicate track, the user gets some sort of alert that the track already exists, and prompts if they’d like to proceed with adding it to the playlist.

This has been discussed further up. I was just answering the question where to find the existing feature

Adding a big vote to this. Duplicate prevention warnings are an enormously useful feature in Spotify, and its omission here is baffling and very high on my Roon wishlist. On a daily basis I often find myself adding tracks to Favorites playlists just in case I haven’t already added them in the past, and then I have to go through duplicate cleanup efforts, which becomes more and more tedious the more playlists I have.

But the bigger problem is that this prevents using playlists at larger scales. Playlists become very powerful when smaller playlists are used to comprise parts of larger playlists. It’s incredibly useful once you start doing it, and Spotify nails this use case. For example, let’s say I have a large Party Favorites playlist, and I want my entire Dance Favorites playlist to be a part of it. In Spotify, I can select all the items in the Dance Favorites playlist and add them to the Party Favorites playlist. The duplicate warning pops up, allowing me to only add the items that are not already in the destination. You can “true up” smaller playlists that are part of larger playlists at any time and rely on the duplicate prevention feature to act as a sync agent. This is a total non-starter in Roon because you’d have to sift through the countless dupes manually, a process that quickly becomes impossible working with playlists of any significant size.

yes please! This would be SO valuable to have!

I agree , Spotify does it fine

And Roon gives a fine playlist indication in de mobile app does not undesrtand why not in the desktop app ?? 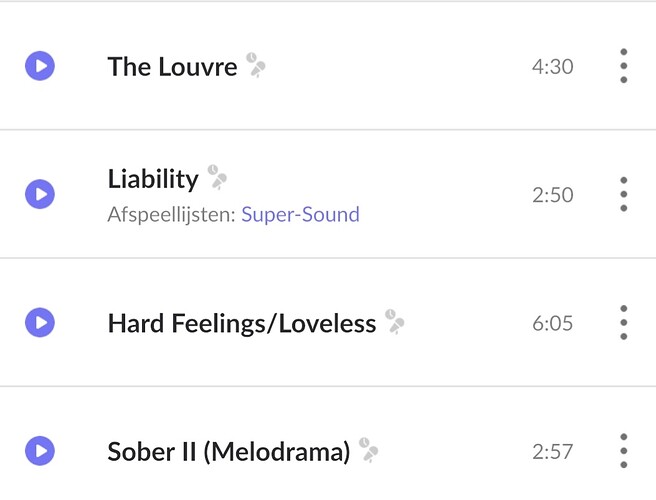 If so, then I vote 100% in favor of this. I add duplicates to playlists all the time because, well, I’m dumb. I am happy to keep paying Roon to protect me a bit from my dumbness.

No commenting is not voting.

To vote you go to the very first post in the thread and click on the blue Vote button.

Hi.
Roon knows what tracks are in the playlist. When you add a duplicate, the system could show a message about adding a duplicate track. It is very comfortable. See how it’s done in Apple Music.

I’ve voted for this as well. Alternately, I’d welcome a way to delete all duplicates. Having neither is deadly.

(As a programmer since 1977, my suspicion is that there’s some deeply embedded assumption in the code that makes this unexpectedly hard to do. These things happen; nobody’s fault. If that’s the case, it would be good public relations to say so: “we’d love to do this, but it would be pretty expensive for complicated technical reasons” makes users happier than “”.)

Would super love to see this added but I also understand if it’s a design limitation to how Roon sees individual songs vs streaming plats.

This is not about being able to see duplicates or not. This is about getting a warning when one is about to add a song to a playlist, where the song is already in that list.

Seems a bit arrogant to me, that you are stating “this topic can be closed” when you clearly didnt understand what this was about.