So when is my Primare PRE35 going to be Roon Ready? Primare has assured us that the software is finished and works flawlessly. They also state that the software has been with Roon for the last few months.
So why I am paying you guys $120 - can you deliver?

In one newsletter, they have written, that they’ll (or must) to rewrite there firmware more or less completely.
Also I’ve heard that the developer team has changed.
I don’t believe, that the PRE35 becomes roon ready in the next time. I’m waiting for it now nearly three years…

Who gave you this information?

I am sure that this information was posted in a comment on Facebook’s Primare Audi Users group. As the comment was posted some time ago I have been unable to find it.
Perhaps you would like to clarify and inform the Primare users what is the present situation?
Thank you!

There is nothing to say about a certification in progress other than it is in progress. In this specific case, we are waiting for Primare to deliver another round of firmware.

I think I’ve answered this question 15 or 20 times for various manufacturers, and the answer has never been different.

Primare itself writes in their FAQ, that the prisma models should be roon ready in Q1 2022, but you can’t trust it, because they told this us since years, that roon ready comes the next month…

I don’t think primare has ever said the firmware is working flawlessly. They said a year or more ago that they’d changed the software team. And they’ve said they’ve had problems getting the firmware to correctly identify and report which input is being used with roon (or something like that).

It’s been years in the making, a bit like Hegel. The last word on Facebook a few months ago was they were aiming to get it done by the end of the year. That’s not looking likely. They’ve clearly hit major problems.

Good information. They’ve already pushed it back further then.

Very surprising that Primare fail with a product including their “Prisma” streaming technology, while the NP5 network streamer (have one) is Roon Ready. Carrying more or less the same Prisma board. 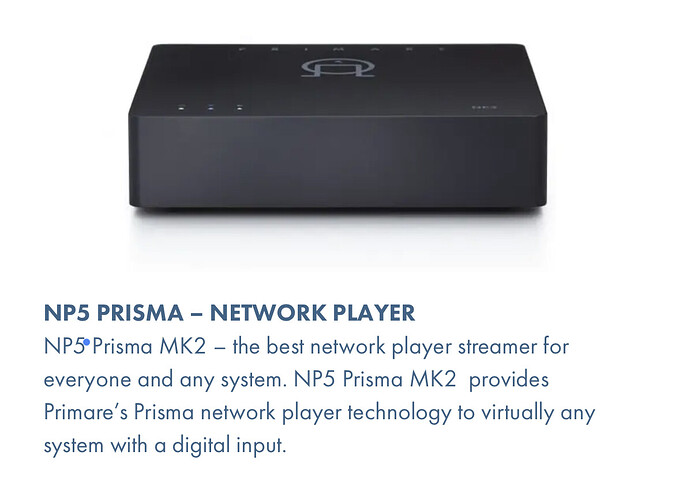 Indeed. They say it’s because the Pre35 and related models have more input options. But other brands - Cambridge Audio, NAD, etc - seem to manage.

It’s not only more inputs, but also different DACs, outputs…
Also NAD or CA seems to have problems with Roon (stuttering, hanging, no gapless,…) although certified as Roon Ready.

This was published in Facebook’s Primare Audi Users group, 8 May 21
Terry Medalen, Marketing Manager at Primare

“Roon Ready firmware for all Prisma models has been with Roon for some time now and is functioning flawlessly. The hold up is representing the product within Roon, in particular negotiating their desire to have full signal path shown within the app. This is proving to be a complicated process to sort out as we have multiple output options on virtually all products - analog line level, speaker level, digital, WiSA, and home theatre pass-through - with gain and balance adjustments for all inputs, and some inputs that are both analog and digital, along with modular construction.”

If I understand this correctly: if a manufacturer produces a DAC it will be a simple process for them to receive Roon Certification, but if the manufacturer assembles that same DAC in a amplifier then they are screwed because Roon requires “full signal path shown within the app”.

Well Roon, I for one do not require “full signal path shown”, I wish to play my music today instead of waiting years for your ideals to materialise.

I’m going say that Terry spoke well before he should have. He promised you something he couldn’t deliver. We’ll have a chat with him.

Danny, I would be more than happy to have a chat anytime after our offices reopen 10 January. In the meantime, all on this thread, please note the following: The information as quoted from 8 May 21, was correct as I understood it at that time. I have since learned that the firmware was not with Roon, but rather the items mentioned were what our software team was working on to resolve, which they have done. The firmware is, as described, working flawlessly, with the exception of a few remaining control and connectivity issues needing to be resolved. Now that the NP5 Prisma MK2 has received certification, all attention is directed toward the effort of providing the final firmware to Roon for certification of all remaining Prisma models as soon as possible in the new year.

The information as quoted from 8 May 21, was correct as I understood it at that time. I have since learned that the firmware was not with Roon, but rather the items mentioned were what our software team was working on to resolve, which they have done.

Communicating about the certification process never leads to a good outcome. You are either certified or you are not. There is no “almost”, and anyway, an impatient end-user will ever see it that way. It’s best to just not talk about certification until you are certified. It’s just not worth it.

The firmware is, as described, working flawlessly, with the exception of a few remaining control and connectivity issues needing to be resolved.

Doesn’t sound so flawless, but whatever… that’s what the developers can fix and the certification process signs off on.

Now that the NP5 Prisma MK2 has received certification, all attention is directed toward the effort of providing the final firmware to Roon for certification of all remaining Prisma models as soon as possible in the new year.

Excellent, glad to hear it.

Danny, flawless in the sense that it is all working and sounding great, as with the NP5 Prisma MK2, with only a few housekeeping issues needing to be resolved, such as providing default volume settings per Roon’s requirements that are different from our preferred settings, so the need for some version of “if-this-then-that” software accommodations.

Sounds like you are close then. Looking forward to seeing it done.

I don’t know if your default volume settings are the only thing, but I’ll leave that evaluation to the certification process.

After a very long time of waiting Hegel is now roon ready.
@Terry_Medalen : What about Primare?

My understanding is that we have to wait for Chromecast 1.52 to be released.