That is what I would do if available in my area. My max speed in my area is just 3M. This is something that is often overlooked by many. That is why this feature is so important to me. I can actually play cd quality fine. If I accidentally select mqq (which seems to be the default), it plays for about 3 seconds and then stops. I actually have no experience with MQA. If I had the internet speed, this wouldn’t be an issue, but just not an option.

@Darin_Davis1 I understood that MQA files were comparable to 44.1kHz/16bit FLAC when streaming, i.e. MQA folds the file to make it small enough to stream. So, have you considered that the problem with playback is unrelated to your Internet connection?

Once transmitted, an MQA file’s data usage is roughly 1.6Mbps once FLAC compressed. That’s slightly higher than CD quality (16bit/44.1kHz – 1.4Mbps) but a lot less than the 2.3Mbps eaten by FLAC-compressed 24bit/96kHz. FLAC is the file wrapper here. Not all masters leave the studio at 24bit/96kHz.

I understood that MQA files were comparable to 44.1kHz/16bit FLAC…

Your understanding is incorrect. MQA is about twice the size (requiring twice the bandwidth) of 16/44.

Even if it was available, MQA requires more bandwidth for less quality than 16/44. Definitely not worth it…

Your understanding is incorrect.

… plays for about 3 seconds and then stops.

Does Roon display a message when this happens? There are a number of things that could cause this problem, so it may be worthwhile opening a thread under #support.

Really? I think my math is correct…

No, your math is incorrect. As Martin_Webster indicated, an MQA file streams at about twice the size (needing twice the bandwidth) as 16/44. 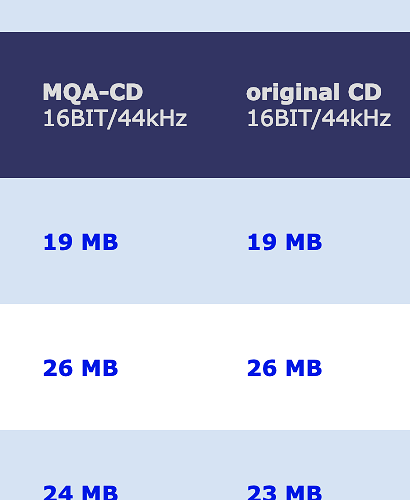 C’mon @crenca and @KenS please support your statements. Nonetheless, my point was to establish if the issue is with the stream (bandwidth) or something else since these symptoms are not uncommon on this forum.

MQA-CD is 16/44 it’s a cut down version so it can be supported on physical Compact Discs.

Were as the streamed files from Tidal are typically 24/44 FLACs and these do require more bandwidth than streaming 16/44 FLAC files.

It is this increased demand that can be troublesome for those with marginal internet performance.

I took a look at the 2L test bench and that’s where the numbers came from that I quoted. I’m by no means a member of the anti MQA posse but, unless I’m misunderstanding something, MQA is a larger file than 16/44.