I have seen several similar topics, but nobody seems to want exactly the very simple thing I want: almost every single track I have has an album (title) tag as well as the usual complement of other metadata. I would like Roon to sort by album first, and let me sort by other tags (artist, composer, conductor, etc.) second.

I think the key issue is that Room, and just about every other server s/w I’ve looked at, is focused on popular music, where artist and track appear to take primacy over album in many cases.

A related issue is that I am utterly sick of having to merge albums manually, and then having to do it AGAIN when the s/w updates. Roon constantly separates single albums into multiples; and, please, do not tell me that it’s because my tagging is faulty. I repeat: With very few exceptions, my files have album title tags. It should be possible for the software to read that tag and say, ah! this belongs with all the other files sporting this album title tag, and NOT go off on a tangent privileging some other tag that happened to take Roon’s fancy.

I concede that, by and large, music software doesn’t give much of a ■■■■ about classical music listeners because, presumably, we’re a small minority. But I’m sufficiently frustrated at this point that I’m considering finding another way; I’ve had room for a few years now, and am researching alternatives at this point, because I’m convinced there must be a way to organize things, on screen, as the albums they were when they were sucked into my digital world.

To recap; I don’t want album subordinate to artist or to genre or any other thing; I want album to be first and everything else secondary. Yes, I’d like to sort on composer (my composer tags are in the “Bach, Johan Sebastian” format and correspondingly easy to sort for a sensible piece of code.

I’m sure someone will now tell me, oh, just go the “Album” view; and I will tell you that that gives me Roon’s startling eccentric view of what constitutes an album which view clearly ignores album tagging for reasons that are utterly beyond me.

I am disinclined, for obvious reasons, to visit each of my 49,917 tracks and adjust the tagging to suit Roon’s taste; its job is to serve me, no?

Thank you. Research continues, because I’m confident that this desperate plea will be fruitless.

I’m sure someone will now tell me, oh, just go the “Album” view; and I will tell you that that gives me Roon’s startling eccentric view of what constitutes an album which view clearly ignores album tagging for reasons that are utterly beyond me.

Well that would be me I guess. I assume you have already tried to sort by album in the album view? I have a largish Classical library and everything gets sorted alphabetically. 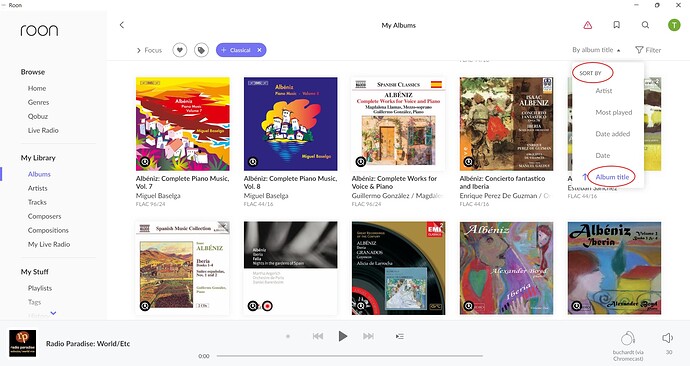 I must admit though I never use this view as past a certain library size scrolling through thousands of thumbnails doesn’t really work.

Your other point about roon constantly splitting your albums does sound like some very basic issue with your library. I certainly don’t experience that. Maybe you could post a few screen shots so people would understand your issues better and they can suggest something? I am not roon support. Just a user like you.