Streamer: Auralic Aries 2.1 (in wireless mode); Matrix X-SPDIF 2 (attached to the Aries via USB Cable); PS Audio Directstream (to which the Matrix is attached via an hdmi cable to I2S input)

However, when I use the Lightning software and select “Roon Ready” so that I can stream from Roon, with the Aries selected as the Zone, no music. Instead, I simply get an “Unexpected Error communicating with audio device” message and no music plays.

I went into Setup in Roon and I do not see the Matrix as a device. When I click on the Gears for the Aries, I see the following: 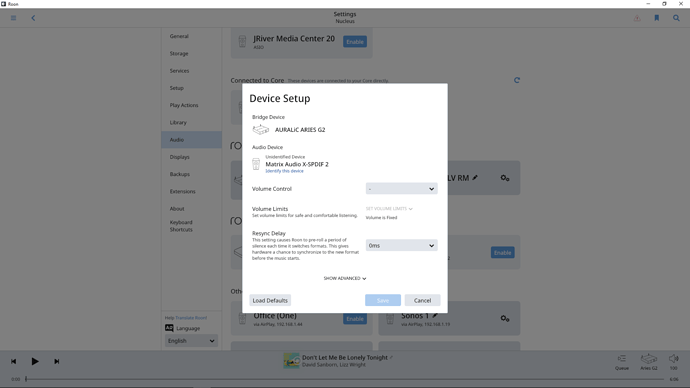 When I click on “Identify this Device”, I get the Find Your Device screen but there is no entry for the Matrix. I tried selecting PS Audio and the Directstream since that is the DAC, but I just bounce back to above screen.

I’m stumped. Hopefully I’m just missing something obvious. In any case, any help will be most appreciated

Solved the problem. Forgot rule 1 when troubleshooting a computer (in this case, the Nucleus) - did you try turning it off and back on. When I did that, I was able to configure the Aries and the Matrix in Roon; identified the Matrix as the Directstream and good to go. Music is now playing via Roon.