Have a problem with one CD. The tracks all look the same - see below, even though I have Tracks set to Prefer File – see below lower. No matter what I do at the Album or Track level doesn’t change anything. I tried to remove and re-add track files, re-identify the album, forget and re-scan the album - nothing helped. Don’t have this issue with any other album, just this one. 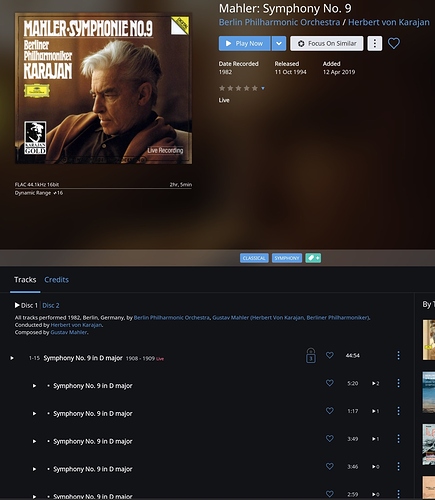 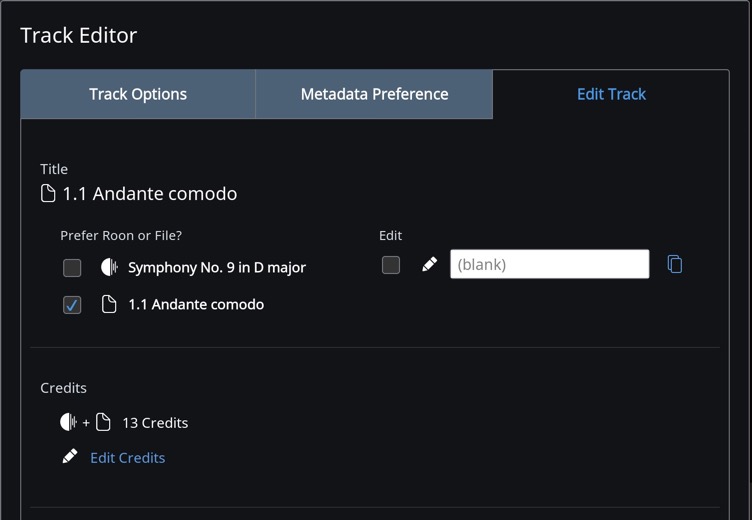 This is bad metadata being supplied to Roon by Allmusic. I’ll flag @metadata who will sort it out. It’s one of the quirks of Roon that if it has identified an album, it is very difficult to go against it.

In the meantime, as a temporary fix, if you have adequate file metadata, then unidentifying the album will work.
Goto 3 dots, edit, identify and keep saying no to Roon’s suggestions, until it suggests using file-based metadata. You will lose the album description though.

When Allmusic has fixed the problem, you can identify the album again.

if you have adequate file metadata

We’ve also added the ability to control the presentation of multi-part works (typically, though not exclusively, for classical music). Two new tags – the inspirationally named 'WORK' and 'PART' – can be used to control the layout of the tracks.

The following tag values coerce tracks 1 and 2 into a two-part work. You can see the results below. 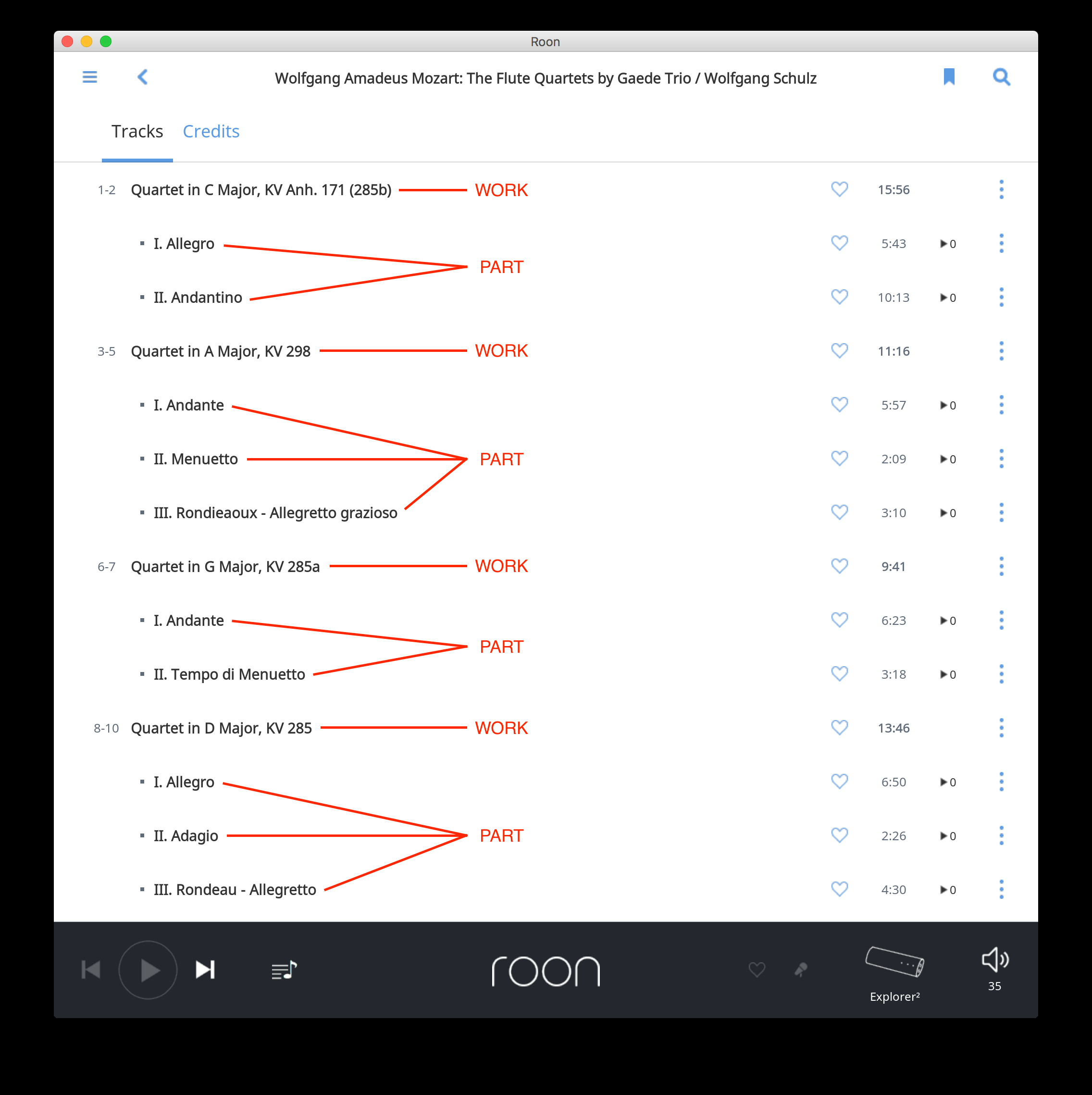 Note : Where you add multi-part file tags to an identified album, then you should “Prefer File” metadata in the Album Editor / Metadata Preference / Multi-Part Composition Grouping setting. 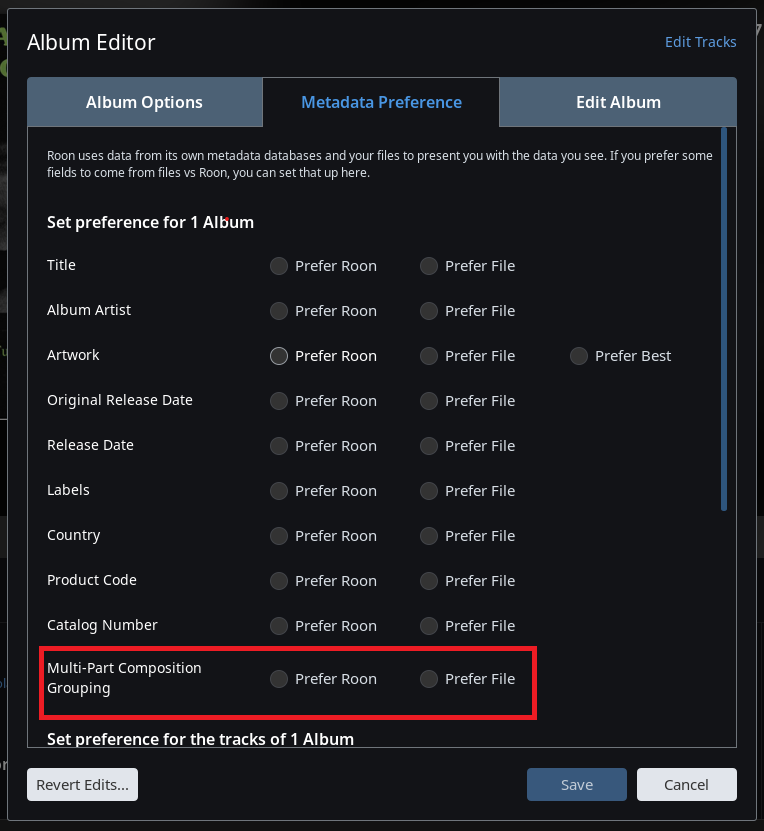 But I’ve got more than one performance of the same multi-part work!

Indeed! Occasionally, two or more performances of the same work appear on a single disc. To prevent all the tracks with the same WORK tag being bundled together under that work, you can use the new 'WORKID' tag to differentiate these performances.

The contents of the the WORKID tag can be pretty much anything: you could just use a simple number sequence “1, 2, 3”, or you could use something more descriptive – e.g. Düsseldorf Oct 1963 , London Jan 1964 , Chicago Apr 1966 – as long as the same value is in the tag for all tracks of the same performance.

Thanks, folks! I’ll tweak the tags, see if that works – while we’re having the metadata provider address this.

Forgot to ask, what program do I use to add WORK and PART tags? I have Yeti, and don’t see those tags there, nor do I see how I can add a custom tag.

Roon is a great application for playing your music, but SongKongs totally automated music tagging features can make it even better, and like Roon we really care about metadata. Roon cannot always identify all your music, especially if your music includes partial albums or invalid metadata. Using SongKong on your music library: Improves the metadata to allow Roon to identify albums it could not previously Can also reorganize folder structure to put split albums back into one album = one folde…

Does SongKong know about tags WORK and PART? They seem to be proprietary to Roon, are they not?

They are not. They are just for classical music (almost) only and thus most programs don’t show them in standard configuration. Every good tagging software allows the user to add any, even user defined, tags at will.

For the question about SongKong, @paultaylor should be able to answer that.

Awesome, thanks @dylan. So, in the Roon, what do I need to do? Re-identify the album? Something else?

Hi @xred — This should automatically update, but it will take a bit of time for this data to make it’s way to your database.

ok, will check periodically, and update.

Just checked. Something did change, and it looks better, however still not there. Disk 1 is ok - not perfect, but acceptable - top image below. Disk 2 however still screwed up. In the different way than before, but still no good - second image below. First of all, note that all tracks are repeated. This is weird. I checked and each pair is referencing the same file. If I delete one, both are blown away, as the file is deleted.

Then, see how “Symphony No. 9 in D major” interlaces the flow of the tracks. That’s not good.

Perhaps I didn’t wait long enough and more metadata changes are still coming. If so, no problem, I’ll come back re-check in a couple of days. 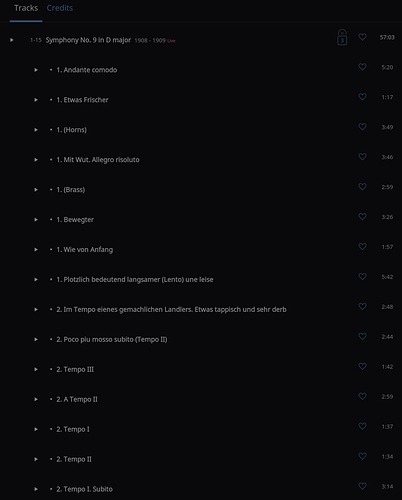 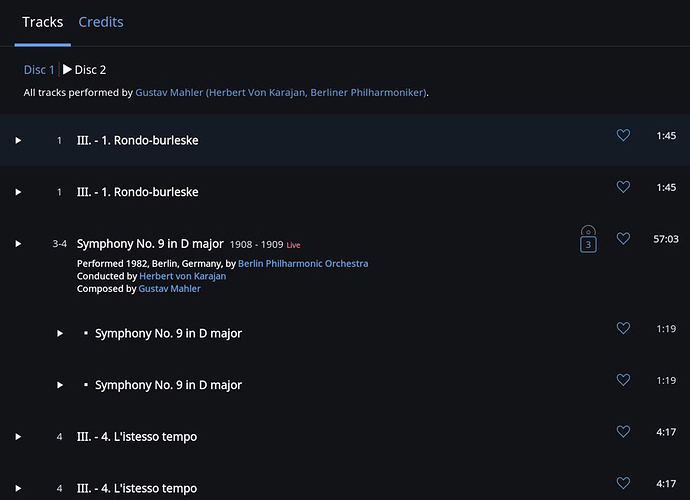 Look at the timings for the tracks on disc 1. This is one of the (rare?) CDs that makes use of sub-track indices, allowing jumping in to sub-sections of the track. So track 1 (the first movement) is broken down into 8 sub-sections, each of which is exposed and picked up by Roon (or your CD-player).

Would you mind sharing this album with us?

Thanks, @dylan. Just sent you the dropbox link.

Check this out. Again, the tracks on Disc 2 are duplicated for some reason. And when I play one both are showing as playing at the same time. Maybe the bug, in the client app or the server, not sure.