I have an album with 50 discs. I am trying to merge two albums. CD 19 has duplicates and I want to move them to Disc 40. However, when I try to do this, the screen only lists the first 38 albums, so I am unable to do this.

How to I get the screen to show all 50 albums?

Is this 50 disc album already merged? What screen are you viewing? 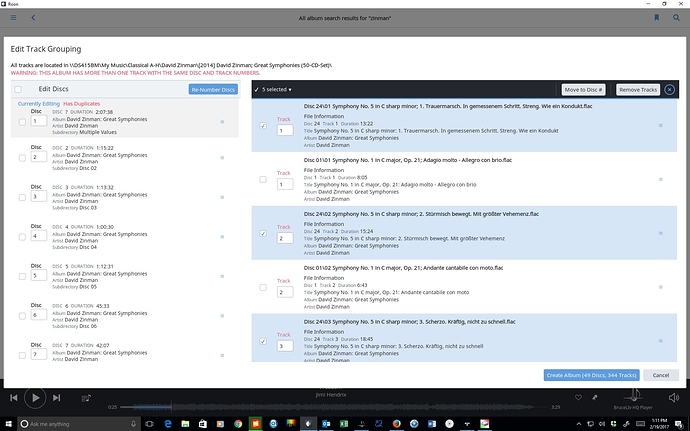 Looking at the duplicates, I am trying to make the files on disc 24 to a new disc, which should be disc 24. However, note that I am not given Disc 24 as a choice, and when I try to create a new disc, I am unable to do so. Note also that discs 40 - 50 are not shown. 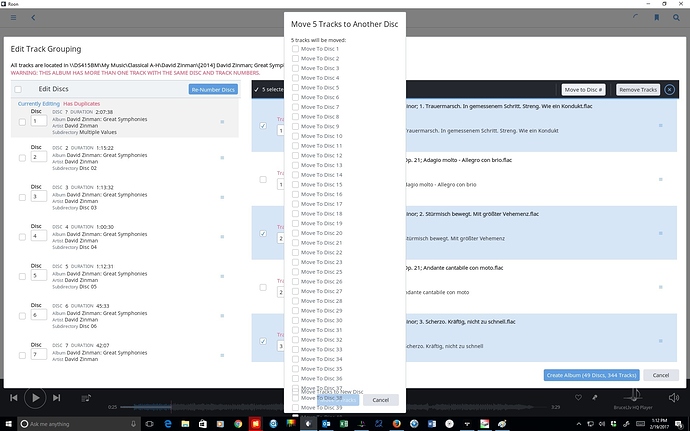 So, I have no way to move the tracks on Disc 24 to a new disc, and I am unable to merge these albums.

Well it looks like a bug to me. I don’t have a disc set that big, so I can’t test, but it seems like it’s trying to cram all the discs in the window on the screen instead of allowing you to scroll.

Let’s flag @support to look into it.

In the meantime, I can see Move Tracks to a New Disc at the bottom on the window. Are you able to click it and type in 26?

Unfortunately not. When I click on it, it does not allow me to enter a new disc number. I think all this cramming is a problem. Also note that the last 10 discs are not even listed.

Looks like we’ll have to wait for Support then.

Ha, sorry for assuming your name was Steve! I’ll edit my posts.

Can you take a look at this? Looks like a bug. Do you want me to create a ticket?

Hi @steveoat87 ---- Thank you for the report and sharing your observations with us! We will be taking a look into this behavior being reported to see what we come up with. Once I have some feedback I will be sure to respond here asap.

@Greg – thank you for flagging us down here

I installed the latest version of Roon and the problem still exists. Any idea as to when this will be fixed?

Hi @steveoat87 ---- Thank you for your patience here. While I can’t give you an exact date when a fix will be put into place, I can confirm that a ticket is open and with our developers as the issue has been replicated in house.

Once the ticket has made it’s way through our queue and my team is provided some feedback I will be sure to update this thread in a timely manor.