I am getting more into modding my collection within ROon itself and to this end I am trying to get genres correct for albums.

I noticed that Roon had id’d my Bladerunner soundtracks as Classical which I don’t want so I went and edited them to uncheck the Classical genre, but they are still appearing if I focus on classical albums.

and yet here: focused under classical

Is this a glitch or am i doing something wrong?

It’s showing the classical tag as unchecked when I edit the albums also: 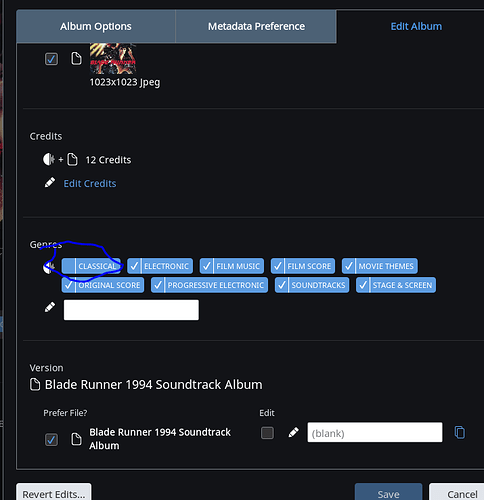 try to remove Stage & Screen or Film Score. I experienced similar problems. Some Roon sub-genres of classical are not easy to spot…

oh dear. Thats a bit of a minefield! Thanks for the tip

pfff… i’ve removed all but the Electronic options and it’s gone, but it’s going on my Life’s Too Short list potentially for further albums.

Roon Gods, please assess this and find out a “better” at least to show main and subcategories so we know which ones will appear and disappear?

I can definitely understand the frustration here. For the moment, this is working as designed, so moving this out of #support.

If I was faced with the situation @Sallah_48 is describing, I would probably first check out the subgenres under Classical and then go to the Blade Runner album and look for any that have been applied to the album.

I think this would be problematic. Imagine if you had a punk album that’s been classified at Pop/Rock, Punk, and Punk/New Wave. It’s reasonable to say this isn’t a Pop/Rock album and take either of the actions I mentioned above.

Maybe you’re a big punk fan and you make that a top level genre, separate from Punk. Or maybe you just don’t want it classified as Pop/Rock so you remove that genre. But when you make that edit, it would be wrong to remove Punk and Punk/New Wave just because you removed Pop/Rock.

I think there’s a reasonable argument here that Focus should include an option that doesn’t include genre inheritance, meaning that focusing on Classical only includes albums explicitly classified with that genre, and not albums from subgenres. I think there may be a Feature Request for that already, but if there isn’t it’s definitely something I’d like to track interest in.

Hi Mike. Thanks for stepping in.

I’ve decided to use custom Tags to avoid any modifications to the Genres completely. I’m using Tags to create genres of my own which I can easily add and modify, expand on, etc. Im about 150 albums in now. Labour of love as ever.

There are 3 main reasons for me ditching the whole genre thing within Roon (some of these overlap, so forgive me in that regard

The whole thing needs some serious rationalising, re-structuring and displaying in a more logical fashion. I use ROCK - Subgenre, CLASSICAL - Subgenre , COUNTRY - Subgenre and the number of obscure categories is mindblowing, Post Punk - Neo-Disco? Alt-Country- Witch House? The you’ve got Alternative Country-Rock as it’s own genre which is not a sub genre of Alt-Country. I mean… It’s pretty dire. That was just in a couple of seconds of browsing one small part of the list. To find what one is looking for, on a deep level, is nigh-on, impossible. Actually, am scrolling down the whole list now… it’s mind blowing!

- it’s so bad that I don’t want to touch it; I’d rather just ignore it and rebuild my own genres completely out of the Roon genre system.

At the very least it should be possible to see a complete overview sheet of Roon genres somewhere, even outside Roon, in the knowlegde base or somewhere, so we can have a global view of the categories and the structure, as messy as that would appear.

As an aside, I love the Tags - they are just so cool; I’d really like to see the ability to apply Roon Tags, to Metadata Tags within the files themselve. That would be cool. But another story and another debate

I think there’s a reasonable argument here that Focus should include an option that doesn’t include genre inheritance, meaning that focusing on Classical only includes albums explicitly classified with that genre, and not albums from subgenres. I think there may be a Feature Request for that already, but if there isn’t it’s definitely something I’d like to track interest in.

this might be the key of the matter here… I follow your Rock/Punk example. But isn’t it in fact an example against doing hierarchy at all for genres? Why establish a relational link if it isn’t one?
But I wouldn’t want to argue with anybody how to use genres… For classical I find the genre as it is now (on album level) useless apart from allowing me to separate my classical albums ffrom my non-classical ones. So for me one single “Classical” would suffice.
I have argued multiple times in other threads that once you talk about classical you have always the WORK in between the album and the track. What Roon provides at the moment as subgenres for classical is mainly information that are work attributes (like keyboard, chamber, symphony, vocal work, etc…). Currently these subgenres on album level don’t help me at all to focus on the things I need (I want to find works, not albums…)
For me it makes more sense to focus in composition view on Period/Instrument/Form than anything else.

Implementing this properly would make Roon even more special for classical. Focusing/Filtering on Album Genre level to get albums is a thing I can do with any other media player, too.