I am running a trial of Roon on a MacBook Pro with a Synology NAS attached through a switch. Set up Roon to scan NAS as a watched folder. Roon scanned the files, but didn’t put the compilation songs under one album copy. Instead, it has one album cover per song. So a compilation album of 12 songs by different artists now has 12 album covers listed under sort by album. Over half of my albums of new age and smooth jazz at compilations. Itunes had no problem scanning the files correctly under the album covers. What happened with ROON?

Roon does things very differently than itunes. itunes just looks at basic information, Roon looks at folder, file tags, and other features to identify the song and then pulls the metadata not from your files but from data providers to create the rich and informative metadata it presents.

Usually in the case of compilations, the file tags are the issue. Take a look at one of the compilations and make sure that:

For example, an old Windham Hill compilation, “Windham Hill 25 Years of Guitar: Touch” is in my system as follows:

etc. etc. for the rest of the album.

ive just started tagging and checking tags using mp3tag which mostly gets its tags for me from discogs,in the album artist section it useally puts various,would this work or does it have to be various artists?
i have over a 1000 compilations to check,my complitations are in a folder called various artists complitions.
i not purchased roon but am close as ive just built a pc server for roon.
regards
gary

On the General Settings tab, there’s an option allowing you to display your compilation albums by either Title or under “Various Artists”. That would seem to suggest that for best results, you should use this exact phrase… 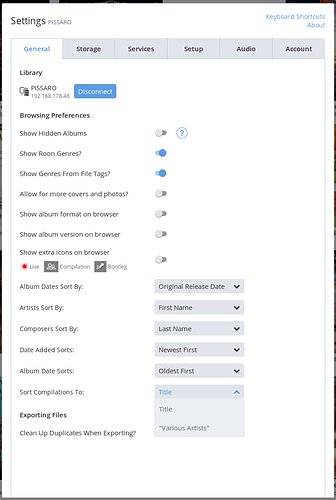 Daniel,
Thanks so much for your help and detailed information. I checked the metadata and the 4th field “Album Artist” was blank. So I ripped a couple of albums, including the Windham Hill 25 Years of Guitar: Touch, and tried Roon again just on those two albums and Roon catalogued all the tracks under one album cover per album. Looks like I have a lot of reripping to do. I may be a senior but not to old to learn, especially from my mistakes. Thanks again so much for taking the time to reply to my problem,
Best regards,
Cory

@gary
I also use mp3tag for pretty much all my tag management. One thing to be aware of…

Discogs, musicbrainz etc tend to list multi-CD sets as one long contiguous set of tracks. At least that is how they end up tagged when you do a match.

Roon ID matching only works with the latter disc 1 and 2 format.

thank you for the heads up,i have noticed it does list the tracks as 1 continus album cd and not 2 cds on multiple cds.
looks like ill have to start reripping my multiple disc sets.
on a side note is there a way of putting various artists in the album artist field in mp3tag all at once and not doing it on each track seperatly?
cheers
gary

Just fix the tags in mp3tag. It takes 30s to do using the tools. Very easy once you have done it a couple times. You can even easily correct the files names at the same time.