I have a problem with some classical albums, for which the same composer refers to two (or three) different ones in Roon (I have checked the file tags with mp3tag, and everything is ok).

One example is Piotr Ilitch Tchaïkovski.

I have 7 different albums containing works composed by Tchaïkovski.

When I make a search by album in Roon, and a focus on Composers: there are three different Piotr Ilitch Tchaïkovski. Why three, I don’t know: if I select the first “Tchaïkovski”, I have 5 albums; but whenever I select the second or the third one, I see the same two albums.

Here are the 7 albums corresponding to the “three” Tchaïkovski: 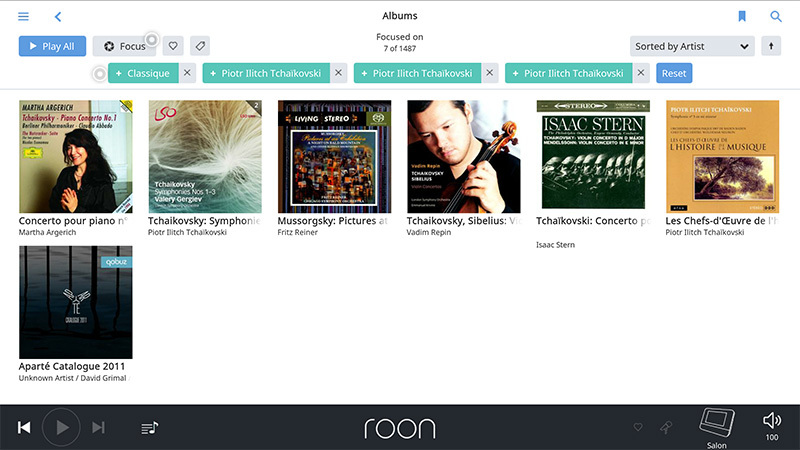 Here are the 5 ones corresponding to one Tchaïkovski: 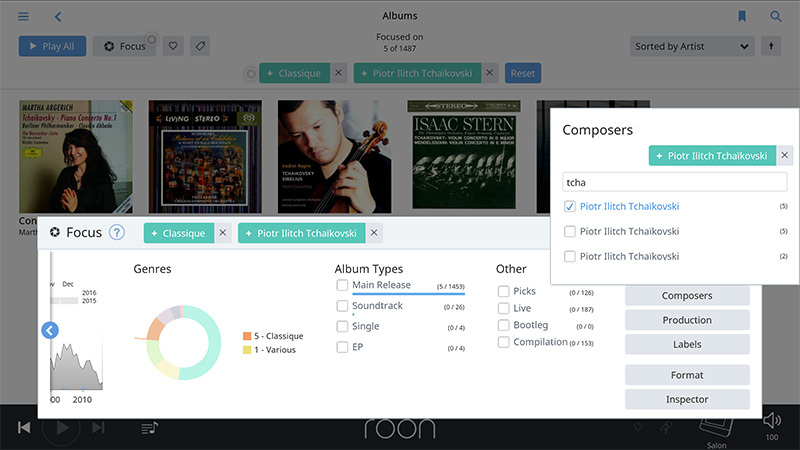 And the 2 remaining ones corresponding to the second (or the third) Tchaïkovski: 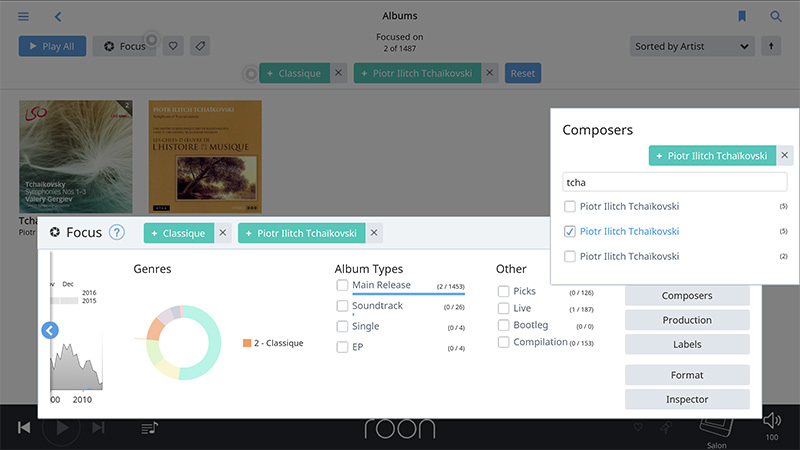 Thank you very much for your help.

I’m not sure about the inconsistency in the search results. I’ve had some puzzling results too.

One possibility is that you are not consistently using “Tchaikovski” as the composer. I say this because I see the name listed sometimes in album view as the artist. Does Roon list “Tchaikovski” as a composer? And, if so, is there a composer biography? I find that Roon is happiest when I’ve tagged “Pyotr Il’yich Tchaikovsky” as composer.

Ultimately, I think Roon should let us designate multiple spellings as equivalent for the purpose of searches, and one spelling as preferred for display.

If I make a search on “Piotr Ilitch Tchaïkovski” in Roon, this is what I obtain: 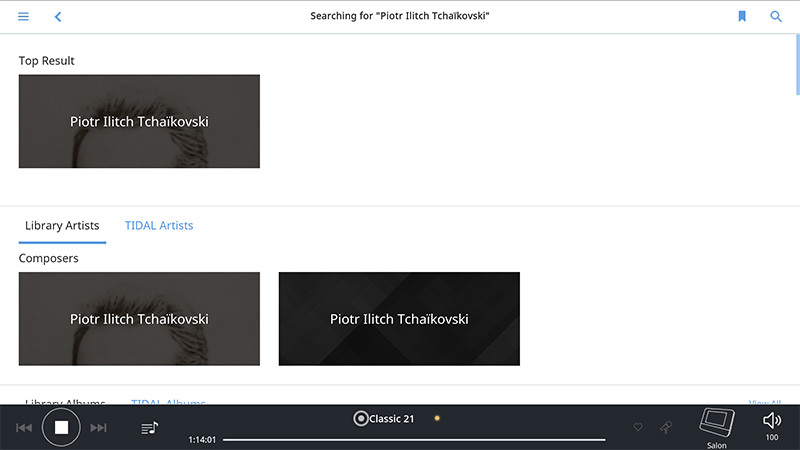 As you can see, there are two composers named “Piotr Ilitch Tchaïkovski”.

The first one is the one for whom there is a biography: 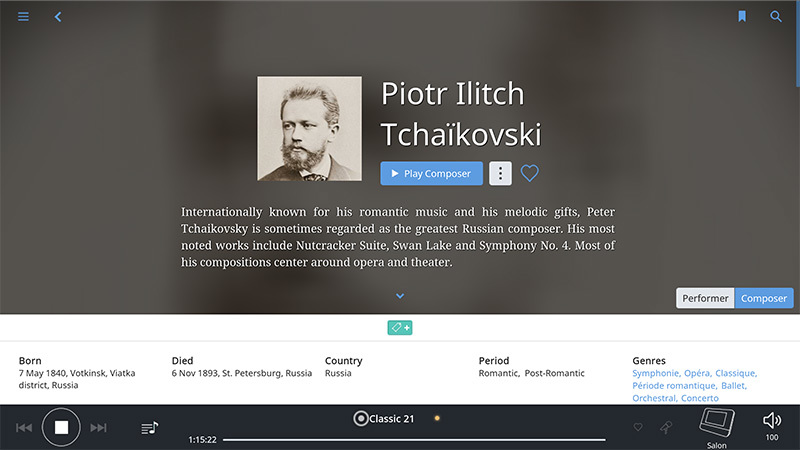 And there is no biography for the second one (which was to be expected… because there is actually no other Piotr Ilitch Tchaïkovski): 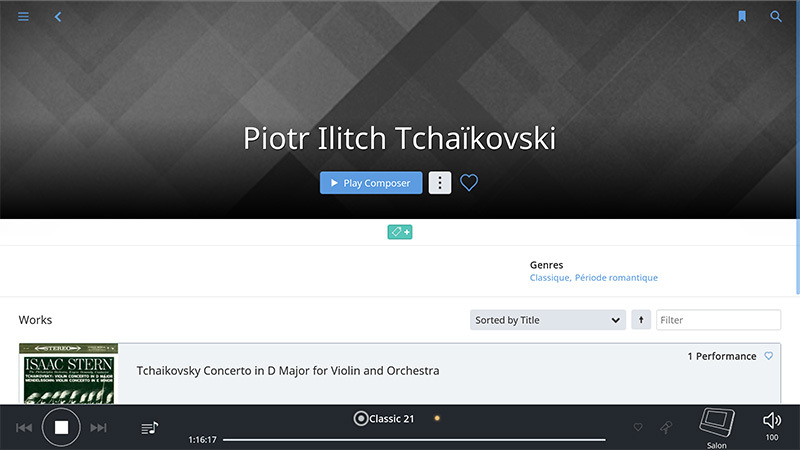 Maybe should I tag this composer as “Pyotr Il’yich Tchaikovsky”, as you suggest. I’ll try it and see what happens.
But I agree with you: it should be possible to designate different spellings as equivalent for one same person.

I am surprised. You are seeing the same biography that I am seeing, with different spellings of the name. Does Roon consider the two names equivalent?

Yes, I guess so.
So it seems that Roon considers that “Piotr Ilitch Tchaïkovski” refers to the same person (composer) as “Pyotr Il’yich Tchaikovsky”.
And my problem remains: why, for some of my albums composed by Tchaïkovski, does Roon refer to “one” Tchaïkovski (the good one, with his biography), and for other albums (although identified by Roon), to another Tchaïkovski…

And my problem remains: why, for some of my albums composed by Tchaïkovski, does Roon refer to “one” Tchaïkovski (the good one, with his biography), and for other albums (although identified by Roon), to another Tchaïkovski…

I’ve been wrong so far. Why stop now? Try pasting the entire name from one of the correctly sorted albums into one of the bad ones. Strangely, pasting a tag from one album to another has resolved some search problems for me. Hidden characters in one tag and not in the other?

Thanks for the suggestion. Any idea is welcome!

But I don’t see where I can paste the composer’s name. There is no such field in the Album Editor (Edit Field) window. And I cannot add Piotr Ilitch Tchaïkovski in the Album Artist field, because this album contains also a work by Mendelssohn (“Isaac Stern” is in that field). But I confirm that Piotr Ilitch Tchaïkovski is in the composer tag of the corresponding FLAC files.

I copied “Piotr Ilitch Tchaïkovski” from the Artist Editor window and pasted it in the same field of the other composer named “Tchaïkovski”… but that didn’t change a thing… I still got two different Tchaikovski.

Roon uses the composer tag from your FLAC files for some displays and searches, even in fully identified albums. I don’t think it should, but it does. Also, some albums are “identified” because Roon recognizes the title and artist. But if it doesn’t have the track info, it displays whatever is in the FLAC tags.

I was suggesting that you paste the composer information from the FLAC composer tag of one track of a good album into all the composer tags in an album that isn’t giving the right search results. See if that fixes the search.

I use Musichi to edit the tags. It isn’t free, but it allows me to change many tracks with one edit. There are free tag editors for download, but I haven’t liked the ones that I’ve tried, so I don’t have a recommendation.

Sorry, I misunderstood. I tag my FLAC files with mp3tag, and I confirm that the same name is in the composer tag of every file.
Here you can see the tag summary for all these files; the only similar tag is the composer one: 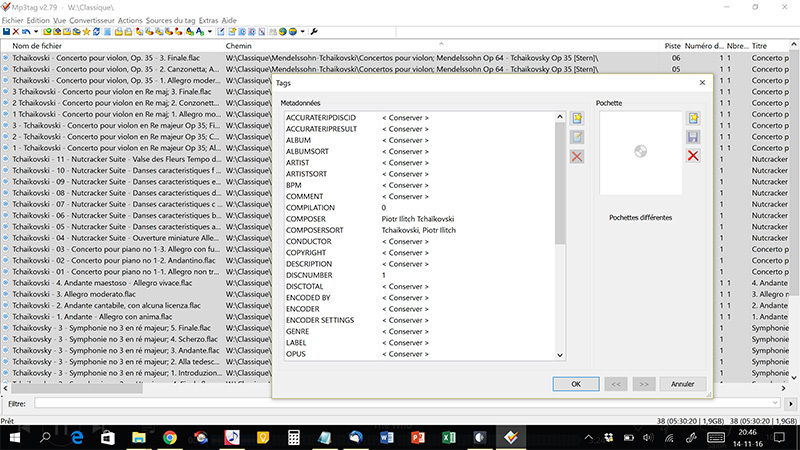 And my problem remains: why, for some of my albums composed by Tchaïkovski, does Roon refer to “one” Tchaïkovski (the good one, with his biography), and for other albums (although identified by Roon), to another Tchaïkovski…

This is a known bug, and is nothing to do with spellings. The Roon team is on it but the solution requires major work.

It’s not so simple as to allow spellings to be made equivalent, because there are many artists who share names (and their spellings). There have to be distinct identities.

I’m sure you’re right, but the images he posts above include only an unidentified album in the 2nd Tchaikovsky: so it can’t be two providers from those images. And from that evidence, his bug looks identical to my bug.

Either way, glad that this thorny issue or issues will be fixed in 1.3!

Thanks for your efforts @joel!

At least I now know that the problem is not on my side.
And I’m glad to hear that it should be fixed in the next version of Roon.
Thank you, and congratulations for this great software!