Problems to play DSD256 5.1 files with the Roon ROCK

I have a little problem with my Roon Rock. As soon as I start playing an album in DSD256 5.1, it starts to hang up after about a minute and breaks off the track and starts the next one where after a minute or two the same problem occurs.

The player is a Trinnov Altitude 16.

DSD512/256 Stereo is played normally and without any problems.

I’d be happy if somebody could help me.

Hello Jannik and welcome to the community.

I have a similar NUC/ROCK setup and it does play DSD256 Multichannel without any issues.

How are you connected to the Trinnov Altitude 16? Could you provide information on your internal network?

Fellow user here, the first thing to look at, imho, is the processing speed on the signal path while playing a 5.1 track. If you could take a screen shot and post it that would be helpful.

I do not believe that Trinnov processors accept DSD input. Trinnov room correction requires PCM. As such, Roon probably is decimating DSD256 to 96-192 kHz PCM. And six channels of that is far too weighty for most CPUs.

The Roon Rock is connected to the Trinnov via HDMI and network.

I do not believe that Trinnov processors accept DSD input. Trinnov room correction requires PCM. As such, Roon probably is decimating DSD256 to 96-192 kHz PCM. And six channels of that is far too weighty for most CPUs.

Not all but, in my experience, that certainly applies to the Nucleus+. 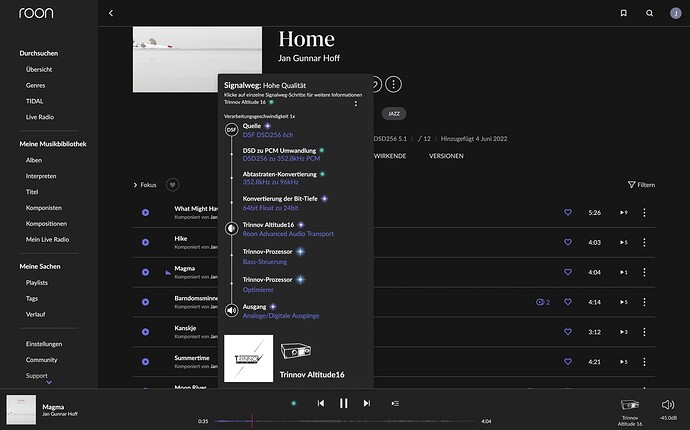 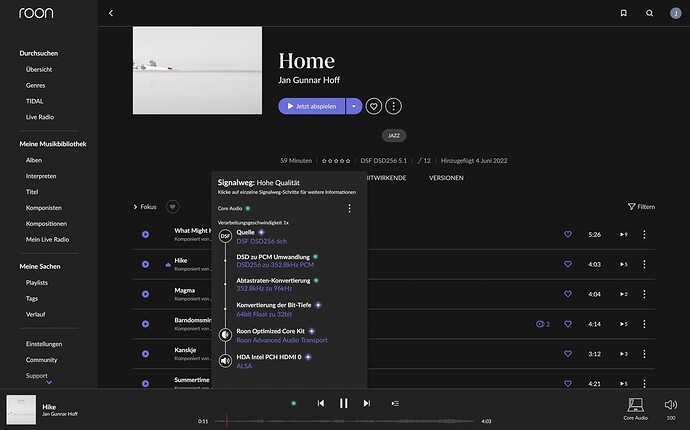 In both pics, the processing speed is 1x which is too low. Anything below 1.3x can begin to exhibit playback issues.

Simply put, the CPU cannot handle it. And @WiWavelength was correct.

Would an Intel NUC10i7 be better for this with 6 cores?

I would be interested to know if the Roon Nucleus Plus would do it… ?!

I think @mitr suggested it would not. You might need to move on from lighter weight mobile CPUs and go to more powerful desktop CPUs.

No, on both counts. Those other two options have slower CPU clock speeds than the i7-8559U in the NUC8i7.

You might need to move on from lighter weight mobile CPUs and go to more powerful desktop CPUs.

Or just forget about DSD256 multichannel. It is foolish overkill. Especially when it is being decimated to PCM to play/process through the Trinnov unit. Obtain the affected DSD256 multichannel recordings in PCM masterings instead. Alternately, use available software to apply offline conversion to the existing files.

Thank you for answer

I know it’s a bit off-topic but just FYI.
Applying DSP on multichannel DSD256 without conversion is very compute-intensive tasks.

I managed 11 DSP pipelines for room correction and digital crossover for 5.1 DSD256. Each channel has 4M taps and occupied more than 8GB of GPU memory. 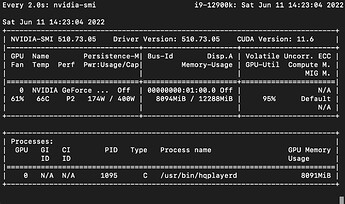 It is the conversion from DSD to PCM that is putting a strain on the NUC in both cases, HDMI and Ethernet.

The NUC8I7BEH easily handles direct playback of Multi-channel DSD files to a MC DSD capable DAC. For my setup there is no processing speed displayed during unconverted playback via Ethernet to the DAC but it does drop down to 1x with conversion to PCM over HDMI. Just FYI.

In the case using HDMI out, it doesn’t make sense use DSD sources, because always a converting to PCM is needed.
You can use an offline converter (like foobar2000 or Hqplayer) and play then the produced PCM file.
If you get the files from nativedsd (they also using HQPlayer for converting), then bye always the corresponding PCM file.

I’m using like Mike an exaSound multichannel DAC, which handles DSD256 native in multichannel. Because I’m let Roon upsampling the sources into DSD256 (multichannel)/DSD512 (stereo) I’ve changed my hardware for the core into a fanless PC (Cirrus7) with a current i9 (mobile CPU) and 32GB Ram. The older system with a mobile i7 and 16 GB Ram couldn’t handle multichannel DSD256 conversion.
I don’t think, that you get at the moment such a hardware, which can used with the current Rock (BIOS!) and so you’ve to install a Linux or Windows OS and then the core.

Alternately, use available software to apply offline conversion to the existing files.

This is a great suggestion. In view of the fact that you have been asking Roon to do this in real time and failing, this will more than likely get you an equivalent but successful result.

The Roon Rock is connected to the Trinnov via HDMI and network.

Why HDMI? The Trinnov Altitude got one of the best Roon Ready endpoint in existence built in (also support multichannel).

oh that is of course a very good set up…I could of course get one too.