I never open the Tidal desktop app anymore. I just run Roon. And I haven’t yet figured out how how Tidal works through Roon.

I’ll start with this, since it’s surely a bug. Tonight I was looking (via Roon) for Led Zep IV. Never bought this in any digital form; usually listen on LP. But Tidal has it. So I searched for Led Zep, clicked on the artist–and saw, scrolling down, a list of Main albums–four albums total–and below that a list of 19 Tidal albums (with the three dots before “albums” in the header. Clicked on Led Zepellin IV (Remastered). Songs are shown as “Unavailable”: 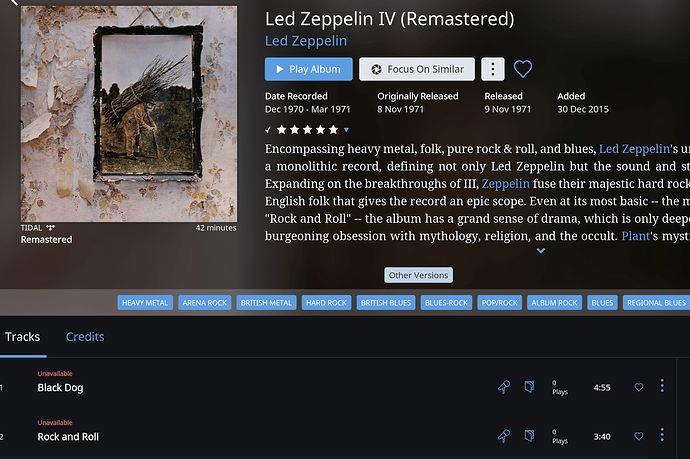 went to Tidal, the desktop app, clicked on the same album, and the songs are available there. So that’s problem 1.

Problem 2–and this could just be me not understanding Tidal/Roon integration: When I go to the Tidal desktop app, I see 28 albums listed. But in the “Tidal Albums” section in Roon, there are 19 entries–19 albums. So 9 Tidal albums are missing. Maybe it doesn’t count the Tidal albums I’ve added to my library? Fine, but I’ve only added four, so we’re still five albums short. BTW, NEITHER version of Led Zep IV is among those 19 albums. (One of them, the Remastered version, is listed in the first section, but as seen above, the songs are “unavailable.”)

So, probably at least a couple of different issues here. Help/elucidation appreciated.

I see that you added that album Dec last year. It appears that Tidal has removed that Remastered version and replaced it with a Deluxe version. This can happen with licensing agreements between Tidal and the record companies.

There’s a couple of ways to deal with this.

Roon won’t show Tidal albums when a version is already in your library. If you have an album in your library and want to see it in Tidal, use the Other Versions button.

[editing this to include some new information]

Looks like you were close: Led Zep IV (Remastered) was replaced by a different version of Led Zep IV (Remastered). They appear identical, but only one–the other one–had songs available. There is definitely a bug here though: Because I had one (older, songs unavailable) in my library, no other version–neither the second “Remastered” version nor the Deluxe version–showed up as a “Tidal” album. When I did as you said and deleted the album from my library, all versions suddenly showed up in the “Tidal Albums” section: two copies of “Remastered” and the Deluxe version.

I deleted all four Led Zep Tidal albums that were in my library, and now I can see all the Tidal albums in the Tidal Albums section. That’s some weird math.

Proposed change in Roon behavior: When I add an album to my library, don’t suppress it in "Tidal Albums."There’s just no reason to. When I look at the Tidal Albums section, I want to see everything Tidal offers there. Keep things simple.

@Jim_Austin Hi Jim. This is a known issue and we are tracking it internally. A month or so ago, we made Roon Metadata Service changes to allow browsing of different versions of TIDAL albums if they weren’t in your Roon Library (previously you could only find them in TIDAL’s app). That change has exposed the issue/inconsistency that you’ve come across. We will sort it out, but oddly, it’s not as simple as you might think (I’m not going to go into technical or design details here). Apologies for the inconvenience; we will get there on this one.