When using airplay the progress bar does not always show the correct progress of the song. Time runs much too slow. Often when a song is finished the progress bar is only halfway. The next queued song will start playing but the process bar will still show the previously played song and keep running until the end. This results in incorrect data being shown at the top of the screen (now playing)
I’ve also experienced that music will sometimes stop playing altogether after a song has finished but when there are still tracks in the queue. When this happens I’m no longer able to play anything. Restarting Roon is the only way to get everything running again. I do not have these problems when playing at 44.1 kHz 16bit directly via airplay It’s only when Roon needs to perform sample rate conversion from eg 96 kHz that this happens.

Hi @stevev1 – we’ve fixed a number of Airplay bugs this week, all of which will be contained in our next release.

It’s being tested as we speak, and should be released early next week. I believe the issues you’re describing in Build 3 have been fixed, but please let us know if they persist once the new version has been released and you’re updated.

OK thanks. I hope the next update will indeed fix it. It’s also affecting the “radio” setting. Radio works fine with airplay until a song is played that has a high sample rate. It will play that song but then will stop playing altogether

Latest update(build 9) still has an airplay issue for me… The progress bar problem is fixed but music still stops completely when Roon needs to perform sample rate conversion from 192Khz. The progress bar keeps going but no sound… airplay device is a Denon dnp720ae 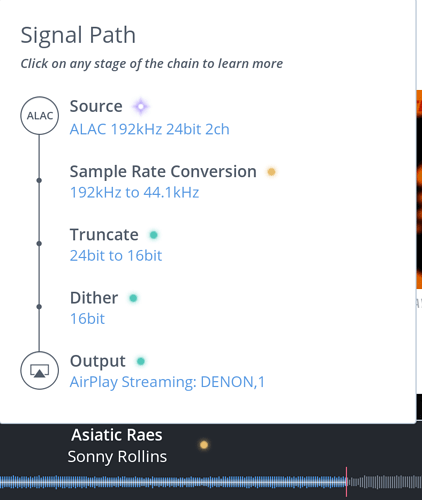 ) so try when our next release goes live – build number will be >9.

In the mean time, one of the bugs we tracked down has to do with iTunes being open on your network, and interfering with our communication with the Airplay zone. You may want to try closing iTunes for now, and see if things are more stable.

Even with build 16 I’m still having airplay issues. Dropouts every few minutes… I’m not running itunes or any other program simultaniously with Roon.

I do not have any problems using airplay with other players (itunes, audirvana, plex, etc).

Thanks for the update @stevev1 – we’ll be in touch to get some more info from you.