Pretty sure Dave is still with us. 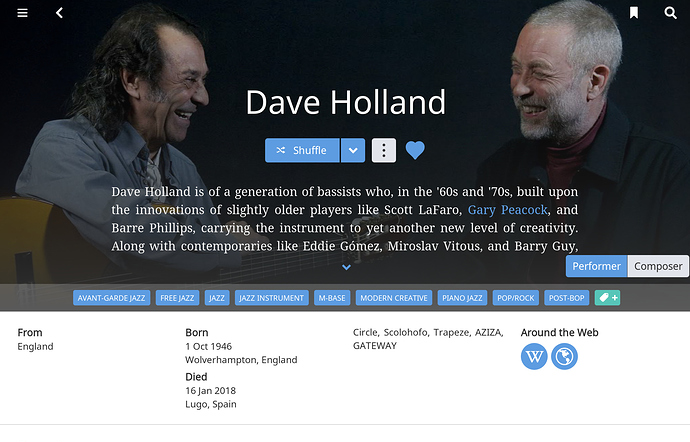 you’re right, of course! The guy that passed away in January this year was a DRUMMER called Dave Holland!

David Holland (5 April 1948 – 16 January 2018) was an English rock drummer born in Northampton, England, best remembered for his stints with Trapeze from 1969 to 1979 and Judas Priest from 1979 to 1989. At the age of six Holland began piano lessons, but soon developed a "mania for the drums" in his own words and begged his parents to let him have a set. After his first appearance as a stand-in for a local band, Holland realised he wanted to be a musician. When he was 14 years old, he suppleme...

He passed before his time. Whoever he was.

Thanks for the report @Ashley_Doane. As is most common with these cases, TIDAL has accidentally assigned the same Artist identifier to two people who have the same name, and it has confused our metadata systems. I’ve made an edit which should propagate to your library within a week, resolving the problem.

We are working on a new algorithm that will automatically notice and ignore these sorts of mistakes in the future, even when 3rd party sources of data contain incorrect information about an artist’s identity.