This is a minor request for a change. After some months of using Roon, I still can’t get used to the playing tracks rule. When I go to an album and click a track in the middle of the list, I’d rather have Roon play all the remaining tracks before it enters the radio mode. As it is, I have to “play the album” to start from track 1 and skip the tracks to reach where I want to start with. IMO, this is not intuitive.

In other words, when I click a track, I’d like to have a button of “Play from Here” in addition to the “Play Now” option. This is what most other players do (including iTunes) and I suspect that there are many users who would agree with me.

Keep up the good work! 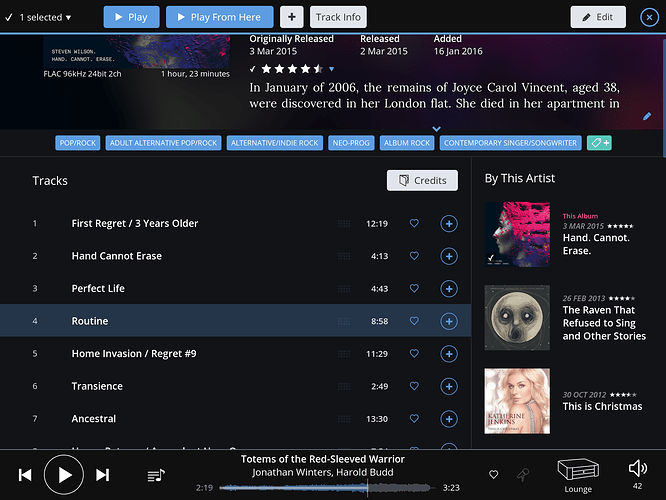 A bit like this one?
Right click / long tap to select the track and then press “Play From Here”.

I still really wish this were added as a setting so if you’re the type that likes the ‘play from here’ way of doing things (a lot of us it seems), Roon just did it.

As it is now it can be done, and that’s great, but it seems a bit ‘clumsy’ and you still have to teach people how to do it. The play from here way of doing things, going back as far as CD, vinyl, cassette, whatever, just seems logical. (To me anyway)

Agree with Steve! Moreover, as it is now, “Play from Here” is a two-step process: right click -> play from here -> play. This is a bit clumsy.

Coming here from my regular home (Naim and Pink Fish forums), I cannot get over the " but it takes 2 clicks " brigade.
Not a complaint about functionality not being present but that 2 clicks are just too difficult to do the function and can we not just do it in one.

There are huge positives to the way Roon works and I’m pretty sure they have been very well thought out, both in how they currently work and how they will fit in to future enhancements.

I have not once with Roon cursed the fact that I’ve carefully selected a queue only to find I’ve deleted it and replaced it with one track or half an album. I frequently found this happening with the Naim app and with IPeng.

Roon isn’t a me too app or a clone of other apps on the market so it does some things differently - thank goodness for that I say.

Completely agree with your notion if not wanting Roon to become a clone. I couldn’t agree more.

That said, the ‘play from here’ thing is messy, there’s no two ways about it (in my mind!). A setting keeps everyone happy and makes the system intuitive to each camp.

I still think two buttons to play is overkill in any event, especially when there’s nothing playing or in the queue already. If you pressed play, of course you actually want to play it! I can’t imagine a CD player that was in stop mode, popping up a dialog after you pressed play, asking if you really meant it.

These things aren’t life changingly annoying, but they’re so simple to fix or provide settings for, it’s hard to see why not to do it.

Actually of all the multiple presses, the things I do the most is go to menu to select album view, which is my most used view - not least because I need it to refresh the blank screen on the iPad every time I pick it up… Would love to have icon always visible for the views, or at least a couple of favourites.

Roon is a beautiful UI in general, so these aren’t complaints, just suggestions for making it even slicker from the individual users perspective - not all of which will be the same.

Secondly I’d like any Play button to summon Pawmasher with a right click or long press, and have a user selected left click or short press; the user could then select whichever Pawmasher action they preferred as the default left click Play button.

That default action, say Play Now, could then be accessed with a single click. If you wanted one of the other Pawmasher actions, then right click/long press to invoke and click on it. Pawmasher would only be summoned if you didn’t want the default action.

The “From Here” alternatives could showup as semi circles on the existing Pawmasher options whenever Pawmasher was invoked from a track selection.

The Play button could change colour or graphic depending on what default left click option was selected.

Good suggestion. Many users have asked for a simple and quick way to start playing music. It seems Roon tried to reinvent the wheel…

And how would you know/ remember on different remotes and different zones what the default action on play is? Could be very confusing when you press play and it does not do what you expect.

Give it a graphic/Color change. You can always check with a right click.

Or just have it set it at the server level, and make everything the same?

Still for me personally and having to explain to my family the difference between press to play in one way I have chosen and then press ond hold to get various options or worse right click this way is more complicated and requires a lot more thought than simply having to hit play and then whatever option I want on e paw masher.

I would support more options such as play from here on that which makes more sense to me than the current option. I seem to remember Danny was quite against that’s though for some reason.

I can live without play from here though I know it was a big deal for many as it seems is a single press to play.

Agree with adding “Play From Here Now” and “Add to Queue From Here” to the existing screen that shows when you click on a track. These can be the third and fourth option on the bottom row (which currently has 2 smaller buttons for “Play Next” and “Add to Queue”).

Agree with @andybob about adding “Play from here” to the pawmasher.

But these settings should be possible to set in preferences for each profile!?!?
I personally would like o rid my setup of the pawmasher and default to “play immediately from here” either when selecting a track of an album or a playlist.
If you like the playlist idea, fine… Not all do though, and i for one almost never play anything other than albums.

I agree, Alpo. When I click on a track to play, I expect (by default) Roon to play that track then continue to play the album rather than go into Radio mode – particularly since a screen pops up with the choice to Play Now or Start Radio. Roon seems to start the radio mode anyway, even though I have explicitly chosen not to. I shouldn’t have to right-click, choose “Play from Here,” then choose Play simply to start playing an album starting with whatever track I want. Thanks in advance for any clarification on this.

Totally agree, play from the track where we start, and then the rest of the album, then silece, no radio.

+1!
That should really be a basic feature of any software which is capable of playing music.
Personally, I don’t use the radio feature at all (could be an option, though). But by default roon should just keep playing the given album and stop playing when the album is over.

Please consider to implement this.

One problem with default behaviours is that for every user that wants it one way there is another user who prefers something different. For example, some users do not want Play to kill the Queue.

I think the answer lies in right click options from which the user can choose a left click default (see post above). Would that be too confronting for a new user ?

Personally, I don’t use the radio feature at all (could be an option, though). But by default roon should just keep playing the given album and stop playing when the album is over.

That is fine. Just turn it off and leave it off. 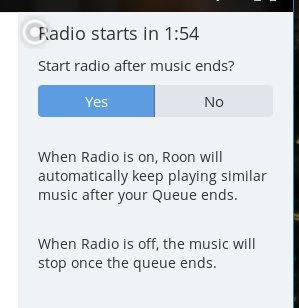 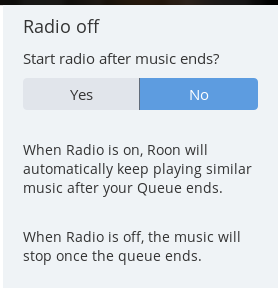 oh, wasn’t aware of that… thanks for the heads up!