I have been running RoonServer on an SSD in my QNAP 451+ for 2 years maybe? Everything was great. Then inexplicably, my SSD drive died. (I didn’t think that was supposed to happen!) I replaced it with a new one and reinstalled RoonServer on it from the AppStore. I selected RoonServer folder to store the database. But when I launch Roon on my computer, it just stops at the Choose core screen where it says “Initializing…” and nothing ever happens. Can you tell me what preferences or whatever I can delete to get it moving again? Thanks!

When you installed the new SSD and then installed Roon Server did you first create a directory called RoonServer? This is where you need to install the Roon Server software. Easy to miss/skip this step.

Oops I see that you did that. I missed that.

Yes. The weird thing is there’s nothing in that folder - no subfolders, etc. Yet when I click on RoonServer in the App Center, it says the status is Running. I can’t see any evidence that it is actually installed anywhere, but it is running.

It must have installed in the wrong place. Maybe on your storage drives?

I just deleted and redownloaded and again pointed to that volume. Now it created a folder called Roon and RoonServer is inside. How should it be?

It should be in RoonServer, not Roon. Move it from Roon to the root directory and you sold be good to go.

You shouldn’t install the qkpg on the SSD itself.

I believe he said he installed the qkpg on the QNAP and them used the app that was created on the QNAP to install RoonServer.

I believe he said he installed the qkpg on the QNAP and them used the app that was created on the QNAP to install RoonServer.

This is what he said:

I replaced it with a new one and reinstalled RoonServer on it from the AppStore.

No. You do not put the app on the SSD. There should be a shared folder called Roonserver on the SSD and that’s it.

The Roon qkpg gets installed on the same volume as the other QTS apps.

We are saying the same thing. Hope we haven’t confused the OP.

I am a little confused. What’s wrong with running all of it on the SSD? Wouldn’t that make it faster? Thanks!

You can’t find the qkpg. It’s installed on the QNAP itself. On the SSD the directory should be called RoonServer. Is that what you have now? 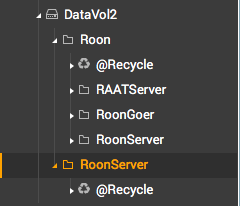 And it’s working - but I have almost none of my artwork.

I can certainly delete it all and start over if needed. When I downloaded RoonServer from the App Center, I pointed to the SSD to install it. Maybe I shouldn’t have done that? Thanks again!