Qobuz Album can no longer be streamed via Roon 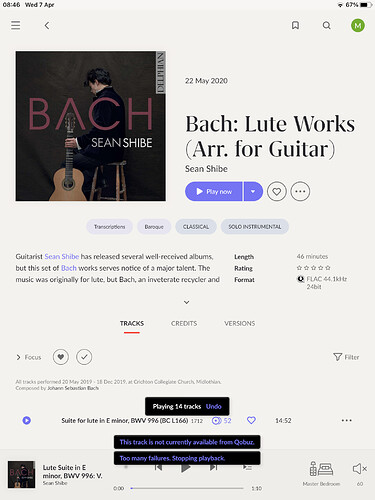 This album was streaming via Roon until yesterday. It is still possible to stream it using the Qobuz app and other apps (Lindemann) but not Roon.
Please could this be repaired?

It plays for me fine in the UK. If you check under versions tab you might see another version of it in Qobuz you need to add that to your library and remove this one. This happens on Qobuz quite frequently they replace the versions they have but Roon still sees the old one and the tracks are unavailable.

Thanks, that sorts the problem.

Perhaps Roon could consider revising the content of the error messages? Maybe include “check versions”.

It is confusing I admit, but not sure the system can tell what the issue would be. Sometimes some albums are released on Qobuz prior to there release date and only have certain tracks available that have been released as singles or EPs already.
The other tracks come available on the release date. So not sure how Roon would be able to determine what the difference is between those and ones that Qobuz changed the version id of.

I have had to do this a lot of late as Qobuz must have done a big update to their catalogue recently.