Qobuz Album Purchases: Not all are listed

Hello @streamy68. Not 100 percent certain my problem is at root the same as yours, but it certainly presents the same in the sense that some albums simply don to show up. Did you get any response out of @support yet? Guess they are somewhat stretched right now.

If you navigate to Settings > General as seen below and choose Yes for Show Hidden Tracks and Albums, do these albums show up in your purchases? 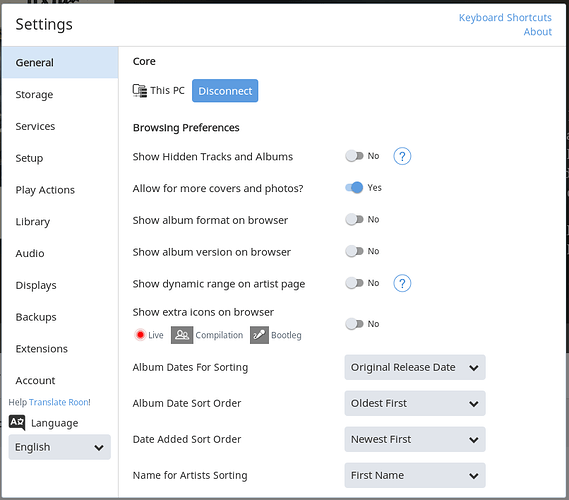 Hello @dylan. Thanks for picking up on this. Am still flummoxed …

Each of my 119 Qobuz purchases has a downloaded ALAC version in my library, including the 4 that are not showing under Qobuz Album Purchases.

If you navigate to Settings > General as seen below and choose Yes for Show Hidden Tracks and Albums , do these albums show up in your purchases?

Was already set to Yes - it makes no difference. see below

I add screenshots of what I see when I look at available versions via the local ALAC copies. Only in the final example (Ya Balad), is a Qobuz version identified by Roon that is potentially the same as my purchase. 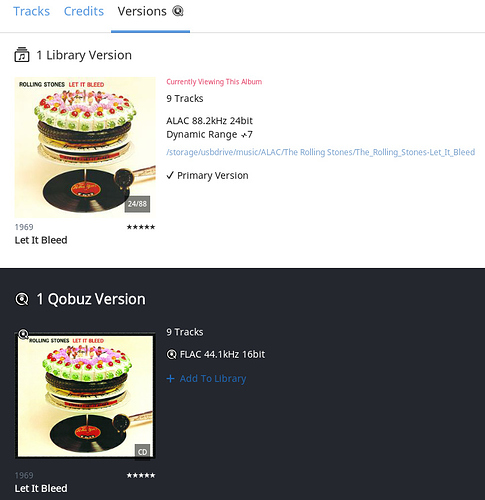 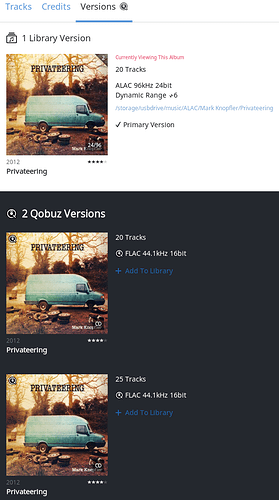 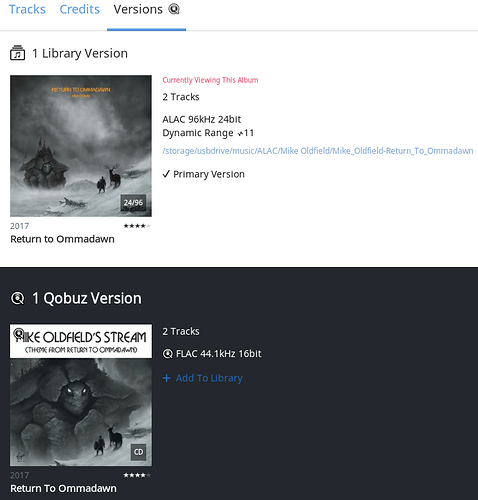 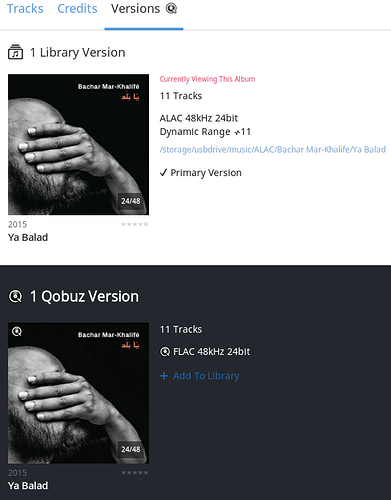 @dylan, and for completeness a screenshot of what I see for a Qobuz album that is ‘correctly’ showing under My Qobuz Albums, if I do a search in my library. Note that here Roon does identify a Qobuz version with the bitrate and depth as purchased. It might explain three of my four ‘missing’ albums … but not the fourth? Somehow Roon doesn’t see the version I purchased on Qobuz? 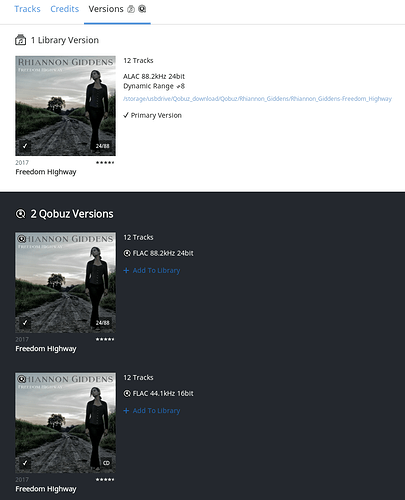 So we can investigate further, may I ask that you please navigate to this album in the Favorites section of the Qobuz app (it is important that it is the exact version in your favorites, not just any version of the album) and choose the option to share that album. Paste the link provided in your response here so we can take a look at this specific album.

Hi @dylan. Here are the links from Qobuz for the four ‘missing’ albums:

Let me know if more info is needed. Thanks again!

and I note that the final link seems to struggle - reverts to a generic page - but it is definitely the one given by Qobuz:

Thanks @dylan for helping to resolve this issue. I have switched ‘Show Hidden Tracks and Albums’ to yes, but no change. The same purchased albums still are missing, even after a restart of the Roon core that runs on a MacMini here. Funny and maybe indicative among missing albums in my case are two that also @ToneDeaf is missing:

Maybe this could give you some indication of a database problem?

Same here - link for Ya Balad which does not show in Roon > Qobuz matches @ToneDeaf. John Lemke ‘Frequencies’ (https://open.qobuz.com/album/4024572859480) another one. Plus others. Show Hidden enabled.

I spoke with the team and we looked into some of these examples. In each case the album was not streamable.

When you navigate to the page you are able to play a 30 second demo for each track, but the album is download purchase only and can’t be fully streamed. Because of this they do not appear in your purchases section in Roon.

Thanks for investigating this. So we need to talk to Qobuz as they promise us to be able to stream purchased albums. I will check tonight if I can stream them when I select them from purchases in the Qobuz app and also in the Devialet Spark integration of Qobuz.

Hi @dylan. Thanks again for reporting back. But …

In each case the album was not streamable.

if this is meant to apply to the examples / links I provided (some same as @streamy68) that’s not correct: I can stream the tracks and albums in their entirety on Qobuz, either from the share link or direct from My Favourite Releases. See e.g below - note the progress bar. 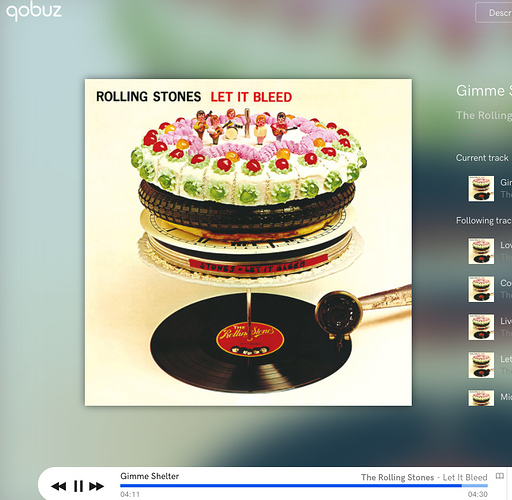 Or am I misinterpreting ‘all’ in your salutation?

Hello @streamy68 - working from home I can assure you that Let It Bleed, The Rolling Stones (24/88.2) and Privateering, Mark Knopfler (24/96) which we both fail to stream through Roon, can be streamed perfectly and in their entirety at the full bitrate from Qobuz itself.

As expected, because that is indeed what Qobuz promises for purchases, as you mentioned.

I even tried via the public links shared above and that works fine too.

Pretty sure it’s the same for you, but let me know the outcome!

I can stream both, in fact all my purchased album, in the Qobuz app in its full resolution. Also, I can stream these albums in the Devialet Spark application (the app that comes with the Devialet Phantom speakers I saw you have in your Roon labs). I assume Devialet has used same or similar API when they implemented Qobuz. So there must be something wrong on how Roon handles purchases and streaming rights. I’m fully aware that this is not an easy thing with all the geolocalization the labels are enforcing with respect to who can stream what. My Qobuz account is from France, but I guess this should be correctly handles when I login within Roon. I would be greatful when you could still continue investigation as I think the problem can be solved in the Roon app as Spark demonstrates that it can work. Many thanks for your efforts.

Thank you for confirming that you’re able to stream those in the Qobuz app. I have passed along your reports to the technical team for further investigation. I’ll be sure to update you once I’ve received the team’s feedback. We appreciate your reports!

Thanks @dylan, much appreciated! What I do know is that in all four instances the exact version/release which I bought and can stream, is not listed if I do a new search in Qobuz for the album title. So I can only get at them via my Purchases section on Qobuz.

I do find different versions for each, as if the version I have in my purchases is not exposed to the ‘wider world’ anymore (replaced by a version with different identifier?), but in three cases still accessible as long as you have the correct ID (eg the shared links posted above) and in one case (the Ya Balad example) only if it’s already in your accounts’ purchases. I notice that a search for Ya Balad only yields a release from a different label (Balcoon), rather than the one I purchased from Infiné, and with a slightly different total run time.

Hello @dylan, any news on this?
Further to my previous posts I have noticed that now another album I purchased on Qobuz is not syncing to Roon anymore - it was before. It is the CD quality album ‘Images of Sigrid (Deluxe Edition)’ by Poni Hoax, with 18 tracks.

The sharing link given by Qobuz is https://open.qobuz.com/album/3700426908092
Just like with the other four mentioned in this post, the release I purchased remains streamable in its entirety for me direct from the Qobuz app.

I noticed this after purchasing a different album and finding that the purchased album count in Qobuz went up, but not in Roon, although both showed my new album.

the one I can still search for has sharing link https://open.qobuz.com/album/w2l875cxnqy0a and looks like this in Qobuz (so different track count and release date, and differently spelled label name):

So the issue identified earlier can, and probably will, ‘grow’ over time - with the count of releases streamable direct from Qobuz but not through Roon increasing, as shown. It seems that Qobuz is not presenting to Roon (and/or Roon not correctly interpreting) the full information for every album someone is allowed to stream? What Roon picks up at present seems to reflect changes Qobuz makes to the set of releases ‘available or visible for all subscribers through searching / browsing’ or something akin. It is definitely not the full set of releases I am permitted to stream.

Hello @dylan. Some good improvements with the new release. Thanks! But…

Now that Qobuz purchases are - for the time being - not presented in Roon any longer, does this issue remain under investigation? Or does this require a new support thread, referring to Qobuz favorites in stead of purchases?

As suggested in the release notes, I have favourited my purchases in Qobuz to be able to see them in Roon, as a makeshift solution. The same issue identified in this thread remains, but obviously it now applies to ‘Qobuz Favorite Albums’ rather than purchases: the exact same albums/releases do still not show in Roon although they are fully streamable from the Qobuz app.

I also created a Qobuz pllaylist from one of the releases that don’t sync with Roon. The playlist title becomes visible in Roon, but shows as empty. If I add Qobuz tracks or albums (that are syncing correctly) to this playlist, those will show. Oddly, the playtime indicated in Roon will be the total including the missing tracks / releases.

Are these specific tracks able to be streamed in Qobuz without purchasing them (i.e. available to play with a Qobuz streaming subscription) or are they only available as 30s demos before purchasing?

Can you share a link to one of these tracks?