I got in Email today announcing Qobuz was available in the United States. Still no word on Canada tho. I signed up for an American trial account but of course it won’t except my Canadian payment method. Ideas anybody or intel on the Canadian launch?

Many months ago, when Qobuz was still expected to complete the U.S. launch in late 2018, the American Qobuz honcho was quoted in a magazine article saying it would launch in Canada a few months after the U.S. I haven’t heard a word about it since.

I contacted Qobuz about Canada on Twitter. Here is their puzzling reply (and my subsequent response). 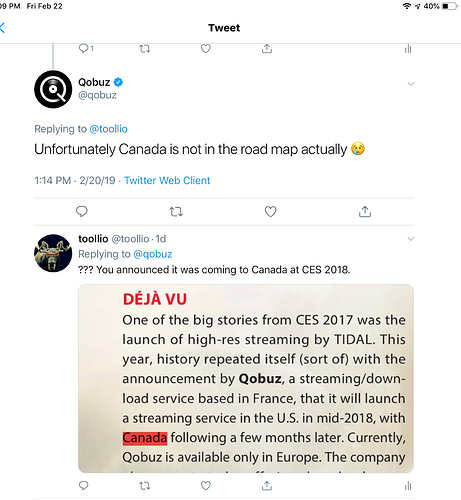 As I expected. Way to much content red tape for the tiny user base.

Canada has a population much larger than close to half of the countries in which Qobuz is already offered. It would seem to have much greater potential for the company than, say, Luxembourg.

I meant the extra red tape special needs dealing with required Canadian content, ie) specialized Francophone content etc. I’m pretty sure this is requirement for a streaming service in Canada.

I see no other reason to be forced with francophone content in Apple Music? CRTC?

The requirement to specifically present and label Canadian content to Canadian subscribers. Do they have the ability to do that right now?

I don’t believe the CRTC have requirements for Canadian content or labelling of such on music streaming services. From their website: “TV Shows, Movies, Music and Other Content Online - In Canada, services that broadcast over the Internet don’t need a licence from the CRTC, as we exempted them from this obligation. We do not intervene on content on the Internet.” (https://crtc.gc.ca/eng/internet/musi.htm). _

“Although certain services clearly identify and promote Canadian artists, streaming services are unregulated and thus have neither Canadian content quotas nor the requirement to make Canadian content development contributions.”_(https://crtc.gc.ca/eng/publications/s15/a1.htm)

Well then Apple must do it to just annoy me!

just curious if this strategy would work… it worked for me with my Tidal account (slightly different scenario) I was in HK when I sign up on Tidal and I live in Canada, My Tidal account charges me in HK$ and is converted to CAD$ - something I cannot change but has worked in my favor as after conversion I pay less than it is normally billed in CAD$ - aprox $3.00 / month saving. So… if I was in USA with ip address when I am in the hotel wi-fi, I wonder if it will let me sign up, and when I return to Canada, it would be equivalent for an American traveling with laptop etc. Any ideas if this would work?

Ideas anybody or intel on the Canadian launch?

Sent you a PM.

anyone have some insight or updates on this?

It was clear to me from the start that Qobuz has no intention of going truly global, and hence in my opinion it’s an insignificant company. I am sticking with Tidal only.

A buddy of mine went to a Saskatoon audio event and there was a guy from Qobuz actually there demoing the service. If I was there I would have asked him directly but here is my FB conversation - 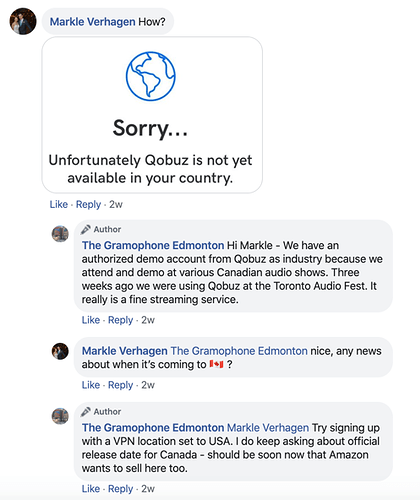 FYI I used my work’s USA network VPN to signup for trial account with paypal successfully and a fake Zipcode and I’m able to signin and run without VPN going forward - seems only signin detects your location. Good luck.

I was not able to make the Paypal trick work over VPN. Seems that loophole may have been closed?