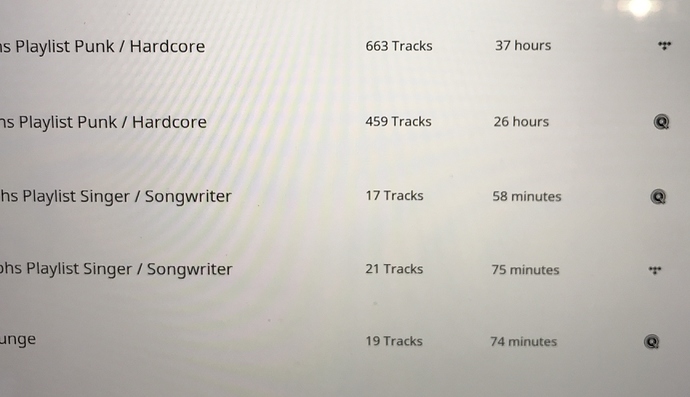 May I ask did you use soundiiz?

Exactly what I used… why? Not good? I‘m actually hoping that it’s me or soundiiz and not the fact that the catalog in Qobuz is really that limited, because I do like the service actually

I would pick a few albums that didn’t get converted, perhaps ones you are more surprised about and search for them in Qobuz. Also rerun the conversion and see if the result is the same.
I have my doubts as to the Qobuz API and reaction to the recent load put on it.

It’s interesting… and I am not a Tidal fan, but I find that of the 1000 or so albums I had in my library fromTidal, about 75% are available in Qobuz. Surprising amount of classical and jazz titles not matched in Qobuz, and Tidal seems a lot stronger on indie releases on the jazz side, for instance Tidal has a lot of the Mainstream label catalog, it doesn’t appear to be available on Qobuz. I used Soundiz initially and then went through everything to groom and try to fix anything that might have been lost in the translation. Pretty much an 8 hour day double checking everything.

Soundiz is a nice service but it’s a little loose on the matching algorithms… I spent a lot of time deleting things it “translated” from Tidal to Qobuz that had nothing at all that matched other than some approximation of the album title. Part of an effort to see if I could move entirely from T to Q. I mean really not even close in a lot of cases. Soundiz will get you started but be prepared to send in the hazmat crew to clean up.

Very, very surprised at some of the gaps in the Qobuz jazz catalog… as that’s supposed to be part of their bread and butter so to speak.

My bottom line is I’m going to keep both for a while. I much prefer the Q experience on their standalone app… I just don’t find the T app experience aligns with my music preferences. But honestly I think at this point for my interests in the USA I think Tidal is better. I just wish that their editorial content was not so slanted to hip-hop, it doesn’t resonate for me. I do understand that’s what other users prefer that’s fine by me, not what im trying to get across.

Are you in the US? The catalog is not yet complete and won’t be until the public beta concludes. Best to reserver judgement until it’s complete.

Will the Q have most of the new albums being reviewed in the music mags like Uncut, Mojo, Rolling Stone, etc like Spotify and Apple Music? That is nice for exploration of things getting hyped in the press.

The latest hot HiRez re-issue is the other interesting element of these premium services. It would be fun to compare their tracks with audiophile SACDs and best digital OOP CDs that I probably already own.

Are we talking Qobuz US here?

If so, this bit from the Qobuz US beta program acceptance email is relevant:

One important note is that the music catalog is not 100% complete yet, but it will be fully populated before we move out of beta. Therefore, it is not necessary to bring missing albums to our attention.

No - I’m Qobuz Europe (Germany) and it’s missing about 25 - 30% of the Tidal catalog… in my case especially independent releases, singer/songwriter stuff and tons of Punkrock related music…

My taste of music is a bit the same as yours. I did some checks [manual instead of Soundiiz) and I was a little disappointed in the Qobuz catalogue too. (Qobuz Studio non beta)
I hate the frontpage of TIDAL (it gives the impression of a hiphop music service) but their catalogue seems bigger and it contains more of the non-mainstream music which I prefer. That’s my impression until now…

Qobuz has always had a much smaller catalogue than Tidal, especially for my listening tastes. Its the reason I have always used Tidal. I ported one playlist the other night to try again this was 50 track list only 30 odd were available. That’s too high a count of missing. I’m still debating keeping it in tandem as I like some of its recommendations, it offers full hires and there is some stuff I cant get on Tidal. But it’s a tad too pricey as I don’t mind MQA and I dont have to pay extra for it.

Still very disappointing though… the 44.1/16 FLACs sound the same as Tidal, the Catalog is way more limited, especially if youre not so much into mainstream music, and the price is a lot higher... only real advantage is high res for the files that are available... Ill use the free trial another 3 weeks but at the moment I think I´ll just stick with Tidal…

Why would they sound different ?

Don`t know… just read some posts by Tidal bashers stating that Tidal was actually not really lossless and Qobuz was better in terms of SQ (not talking MQA vs High Res but regular 44.1/16 FLAC)… anyways - I can hear no difference.

I raised the same question the other day as I for one have never heard any difference and now they are both in Roon it’s easier to do a one to one comparison, where before you would have to use a different transport to get Qobuz to the same system so not like for like.

Sound quality is exactly the same on CD releases.

… I think what I‘m actually going to do is stick with Tidal, keep the Qobuz account for buying occasional high res though… will Roon actually recognize my Qobuz downloads under my Qobuz account if I‘m not an active subscriber to their streaming service?