Minor issue but interesting as I don’t find any other new releases showing identical duplicates. I do see duplicates that are different bitrates as expected. This is more of an FYI than a support case. I see the same dup regardless of the client device I view it. It’s a lovely album. 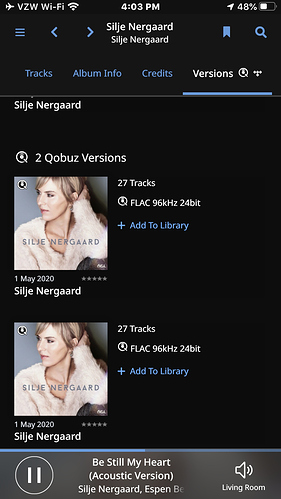 Hey @Larry_Post, it’s a genuine duplicate on Qobuz’s end. If you click through to each version and check the Credits, you’ll see that the product codes are different. Happens quite a lot actually.

Thanks. I didn’t see a duplicate in the iOS app but then I didn’t look really hard either. I don’t use the app typically.