Assuming I have a Qobuz subscriptiion for hi-res streaming, can I stream that through Roon 1.6 in high-res directly? I read somewhere that that would only work in hi-res, if I first buy the highr-res album.

I really hope I have misunderstood the above, and I can stream qobuz content in high-res in Roon 1.6 (with the correct qobuz price plan/subscription)

Yes you can stream in hi-res (assuming you have the relevant subscription): 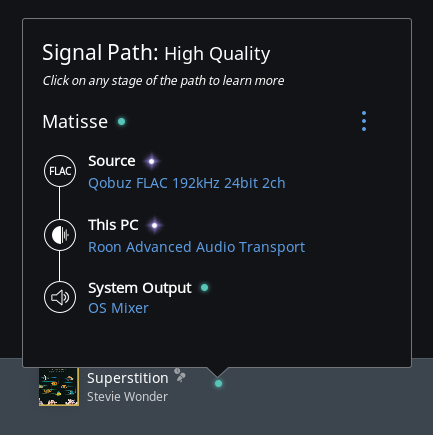 However, be aware that this puts an additional load on your internet connection. Unless your broadband is up to it, you may get dropouts at the higher res streaming (I know I do)

Thank you so much for the quick reply

When I stream high-res content with the Qobuz studio plan, it is shown as 44.1khz 16bit in the signal path. 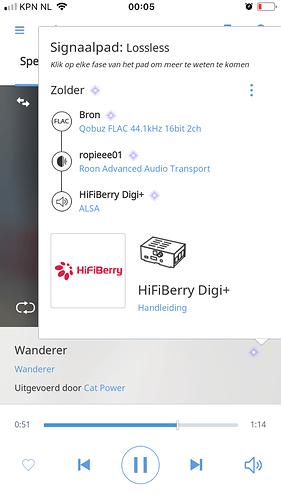 Same with my Devialet. 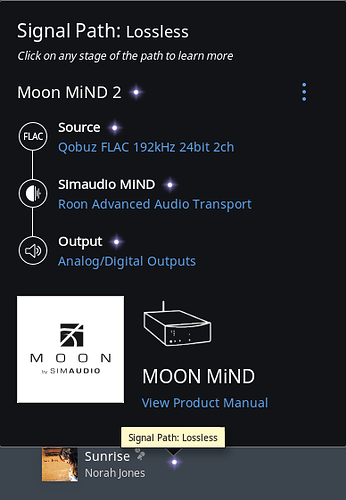 Can you stream in high Res from the Qobuz app?

When I stream high-res content with the Qobuz studio plan, it is shown as 44.1khz 16bit in the signal path.

There is some Qobuz content that shows up as available in higher-resolution formats than what is streamable. If you try to play the same content with the Qobuz client and see the same issue (shows up as 24/192 or some other higher-resolution format, but plays back as 16/44 or something lower), that’s what’s happening. We’re working with Qobuz to resolve this issue. However, if you’re not seeing the same results in the Qobuz client, that’s a bug and we’d definitely like to know about it.

Edit:
But the Qobuz app is a big mess regarding audio output. Still don’t think they have fixed exclusive mode for audio device; which of course will result in a complete destruction of signal path through the OS mixer. That is why Roon is so great; the music is not even going through my computer; directly from Roon core (Nucleus+) to my Roon endpoint (Moon MiND2) via ethernet cable (via a managed switch; I’m not so dedicated that I think the sound will improve going via a direct cable between the two… It is ethernet and TCP/IP; the entire Internet is built up around it - bit perfect and all

Which album; give me an example.

I think the suggestion is to play the album that you started the thread about in the desktop player and see if it streams in CD or high Res. Then one can tell if it is a Qobuz or roon issue.

Cat Power - Wanderer is marked as FLAC 96kHz 24bit; but it seems to be wrong. It is not; suspect wrong tagging (contact Qobuz). We have seen this on a few albums on Tidal as well. 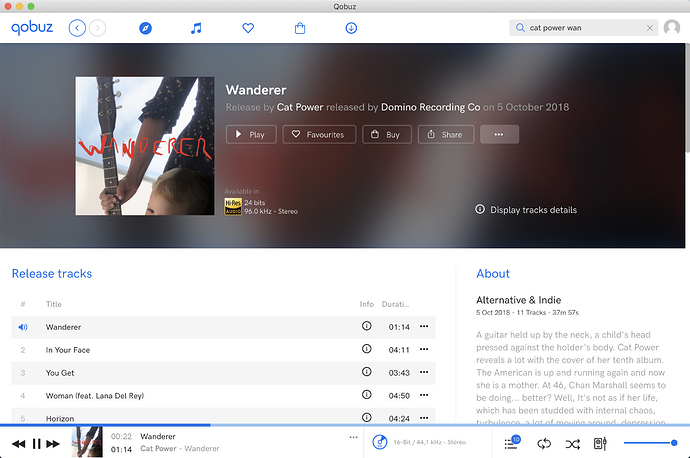 Qobuz also states 24bit 96Khz; but it also puts out 16bit 44.1khz; so Qobuz have screwed up something in their system here. Complain

Hence, we can not blame Roon here

I have a Devialet and happily stream Roon hi res - in accordance with my subscription - that is for those albums I have purchased as hi res. If I want to stream all available hi res albums at hi res, I will need to purchase the next subscription level (studio or sublime +) - which now that Qobuz is integrated with Roon, I am seriously considering. It should be noted that not all Qobuz are available in hi res.

But the referred album (Cat Power - Wanderer) is wrong in Qobuz; I have the Studio subscription. Works on other albums I have not bought. But without studio or sublime+ subscription; you will of course not be able to stream hi res.

Yes I am confirm Auralic Lightning has the same issue, not all hires marked albums can be streamed, some are only available to purchase and download - trouble is Qobuz doesn’t distuinguish in the API so third party apps display as hires but play at CD lossless.

There is some Qobuz content that shows up as available in higher-resolution formats than what is streamable. […] We’re working with Qobuz to resolve this issue.

I am hitting this issue quite often and hope you can resolve it with Qobuz. The issue is at their end because the same thing happens in their MacOS app.

It seems that all the releases from Channel Classics (example: “Gershwin: Works” performed by The Gents) exhibit this problem consistently. They show as 192/24 but stream as 44.1/16.

I’m wondering whether Qobuz have a licence to sell at 192 but not to stream at that bandwidth, and their software isn’t smart enough to tell the difference? Regardless, it is incorrectly displayed and therefore a bug (as well as disappointing because it blocks quite a bit of hi-res content).

because it blocks quite a bit of hi-res content

Does it? What do Qobuz’s own apps stream the same album at?

Does it? What do Qobuz’s own apps stream the same album at?

I was unclear. The Qobuz app streams at the same low resolution. What I meant was that we cannot listen to advertised quality on either app due to the error at Qobuz.