Qobuz - I've requested another trial period for use with 1.6

I suspect I’m not the only one to have taken advantage of the Qobuz trial period before the integration with Roon was released in 1.6. It would be nice to have another play with it, so I’ve asked Qobuz if I can have another month. I’ll let you know what they say.

I’ve also suggested they make this offer to all Roon users who have already trialed Qobuz but not yet signed up - I’d have thought it would be an obvious offer, costing them nothing, potentially bringing them a lot of users.

They are offering free trial at the moment. I just had three.months of sublime trial before Xmas and now got a month of the hires streaming one.

Same here. Had the Sublime trial, now on a one month trial (redbook quality). Was quite surprised actually as I was expecting to be billed immediately.

That’s a great idea! Hopefully, Qobuz will get back to you. If they do, could you please update this thread here? Thanks

When does the qobuz beta end?

And what is the qobuz roadmap for availability to US roon users?

Please do, i had a free use before the integration at Roon and would like to try it again

I was offered a 5 day trial of their new his res streaming service - Studio.

When I initially requested an extension I mentioned Roon, which was acknowledged in their reply.

How did you get a whopping three months of Sublime? That’s quite remarkable. Are you living in the US?

Bump. Also curious about where to find a three month sublime Qobuz trial?

They where offering it around September last year in conjunction with CEDIA as a voucher code it was linked on a Qobuz thread on this forum. I don’t think it’s available anymore 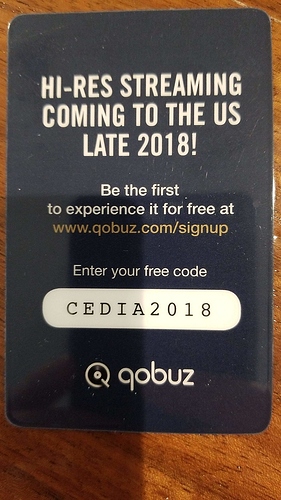 Asked this in another thread, but has Qobux said anything about either extending the free period or ending the beta? I really need to see the full US library, right now there is a lot missing from the Qobuz library relative to Tidal. I guess I can drop Qobuz for now and resubscribe once the beta is over, but it would be nice to know whether we’re talking about days, weeks or months.