That maybe because it looks like the actual Qobuz app new releases is messed up this morning.
I just checked it and its showing “new releases” from as far back as January as supposed new releases…most odd right now.

This has been the case for the last couple of weeks… Maybe Qobuz is showing older releases which are new in Qobuz? I listen mainly to classical music, and for some albums I was interested in this seems to be the case, but I am not sure if this is the real cause for so many older releases showing up as new…

Actually I think they are showing the Best of 2022 Albums instead of new releases according to an email i just had from Qobuz so that might explain it all.
As when I looked at a lot of the “new releases” I found I had already hearted them so not even new to Qobuz I think.

Just noticed that the Qobuz app itself has the same issue with new releases. Not a Roon problem then.

I think they are showing the Best of 2022 Albums

That doesn’t actually explain though why there are so many older release in the ‘new releases’ section… I mean, really old, like from the 60s and 70s… 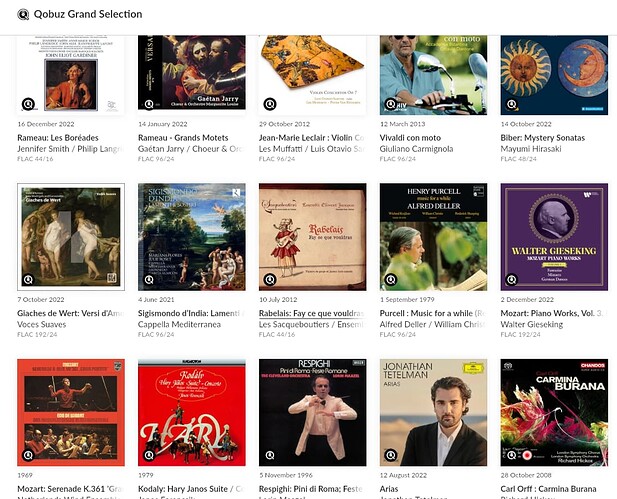 Nope…just totally messed up then.
At least it’s not Roon though

That doesn’t actually explain though why there are so many older release in the ‘new releases’ section… I mean, really old, like from the 60s and 70s…

Perhaps older releases were reissued or new to Qobuz this past year?

Aren’t they just showcasing some kind of “Christmas roundup” in lieu of almost nothing of note being released the last Friday before Christmas?

I’m glad I’m not the only one who noted this. I love browsing new releases without it being bogged down by ‘newly released to the service’ albums. Hoping it gets restored to normal soon.

There was a Qobuz rep on the forum recently, but I can’t remember his username to tag him.

My New Year’s wish would be a long needed overhaul to the Qobuz new release UI. Too many clicks are needed to see everything, and too much back and forth. A tab window like the one for new releases recommendations on the home page would be ideal. That way one could just click between the genres and see everything available. Perhaps an all-genre highlight tab along with the other drill down genres.

I just sent them a support request. This is still not right. I usually browse Classical new releases each week, and there are many that were released in the last two weeks that don’t populate in the Grand Selection now. At least the rereleases appear to have been mostly taken out.

It does need some TLC