When I search pink floyd in Roon, Qobuz returns 6 albums

Whats the deal here and how can I improve the situation?

Now actually count the number of albums you see within the Qobuz app and you’ll come up with a little over 30.

If you’ve added albums to your library, those will show first in Roon and then keep scrolling down until you see the ones that are not in your library also.

Yes I am fully aware of how many albums floyd have done. I notice in Qobuz they seem to have a bunch of remastered singles mixed into the albums but there are 30 odd. same for YES 140 albums in there

but only 14 showing in roon.

If I search by artist my expectation is all available albums will show from qobuz, we agree there is 30 so why do I only see 6?

I literally signed up to qobuz with the new 14.99 so nothing stored from them yet

I know its searching qobuz, I know this because with tidal search results come back really quickly, switching to quboz its sooooo much slower, damn.

I have both Tidal & Qobuz subscriptions (which are logged into Roon). When I type “Yes” into the search bar within Roon, then select the artist “Yes,” I get these results… 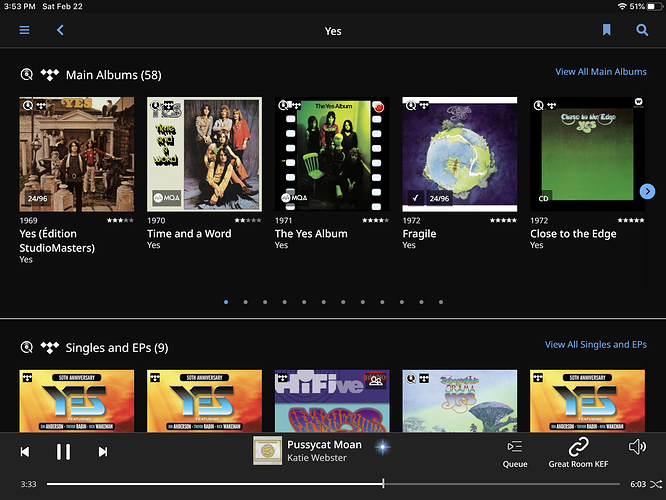 58 “main albums.” Please post a photo which shows the search results you are describing.

Could you please provide a screenshot of the Pink Floyd search screen you are referring to? You can use these instructions to attach a screenshot to a post

OK so i logged out of Tidal, and did the search again and it improved a bit, I now get 14 results for pink floyd from quboz 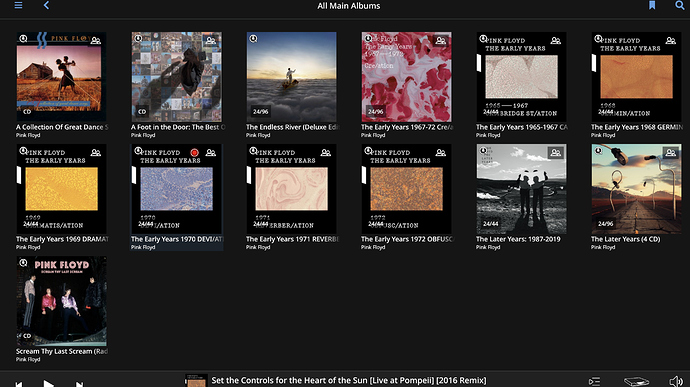 Whats all that about? Regional? I am in the UK.

That might very well be. I’m in the U.S. and the Qobuz catalogue is different here than in Europe…

I would expect that Roon’s visibility to Qobuz content would match the Qobuz iOS app. Your access to content across both platforms should be determined by your “region”.

I see you are in the “All Main Albums” screen, keep in mind that albums that are already in your library will not appear in this screen.

Hi John, ah right I see, sorry for being dim.

What I was searching was just to see if there was a hi def version of my favorite albums, so if they are getting buried into my albums list then do I have to go into each album to happen to see if there is a quboz hidef version?

Thanks I understand that now, What I am driving at is thats a bit tedious if I want to see if Qobuz has a hi def version of it? Could you imagine having to go through zappas back catalogue each album at a time, frankly it would be easier just to show all results from qobuz in the qobuz sextion.

Go to settings, general and select show hidden tracks and alums, I think that shows duplicates.

Ah ok, I’ll give that a try, thanks

Yet more roon oddness that needs sufficient explanation and tweaking to get around.

If someone goes to “all main albums” I’d expect to see “all” not exclusions based on which library they are in.

I like roon because it replaces a much worse way of controlling my music, but as an interface it still has some significant issues if you try and dig down into metadata.

Thankfully I don’t really use it for much apart from album browsing but even then there are oddities because of roons understanding of “versions”.

Whereas I like it that it separates what I have from what I don’t. And I don’t care which versions are hidden, if it doesn’t sound right I can go looking.

It only shows duplicates of albums in your library. For example, I have the album Temptation’s
Gettin’ Ready in CD quality flac in my library. The Tidal and Qobuz versions, some of which are higher resolution, are listed under Versions, but are not “in my library”. If I added them to my library, then “show hidden” would work.

At the moment, there is no way to let a user know that “Hey, Tidal and Qobuz have a higher resolution version of the Temptation CD.” You have to go into the album, and check for yourself under Versions. Now, personally I would not want Roon to auto-choose, but, it would be nice if there was an indicator that such were available, so I would not have to look under every album.