I used to be a Tidal + Roon user but since I moved in the country with poor internet connectivity I canceled Tidal and only listened to my local library.

In that time I really missed discovering new music via roon.

We recently switched our internet provider to Starlink and the speed we are getting now is so much better so I’d like to start streaming again.

I’m curious to know if there’s a difference between both services as far as music discovery (roon radio) inside of roon?
I subscribed to a month on Qobuz this morning and the Qobuz tab seems more appropriate, the Tidal tab used to be Hip-Hop only which I really don’t care for…

Does roon offer the same info and credits for both streaming services?

Since Roon uses its own indexing, I would think it should offer uniform support for discovery, regardless of the service. But since I am using Qobuz on a regular basis and only used Tidal for one month only, I can’t say for sure.

That would make sense.

Tidal on the main menu just presents a version of what you would see if you went to the native app , ie unadjusted by Roon.

I only have Tidal as Qobuz isn’t yet in South Africa so I can’t comment on the difference . There are many users subscribing to both who will no doubt comment.

Thanks a lot Mike, that confirms what I thought.

How does the Tidal page inside of roon look these days? Is it still mostly pop music displayed there? 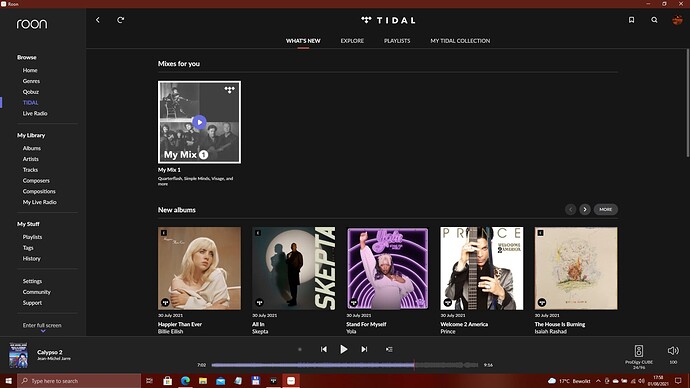 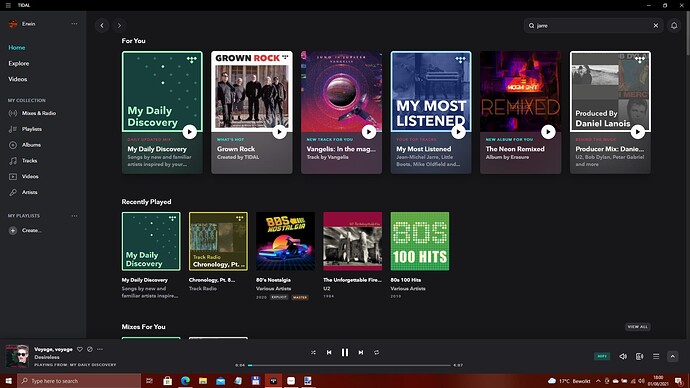 The latest version of Roon got an update to the Tidal page. It looks pretty similar to Tidal’s own app.

When it comes to music discovery. The daily mixes Roon recommends is music based on what I listen to, not what Tidal or Qobuz deem interesting. Although Tidal’s daily recommendations do quite match my listening preferences. Same with Apple Music btw.

I stream all 3 services at the moment (Apple Music, Qobuz and Tidal). Not sure if that stays this way. I have Apple Music through Apple One subscription. I’m using Qobuz and Tidal with both Roon and Audirvana. They are both good services, but it feels a bit double to me. Most music both have. And I barely, or not, hear a difference in music quality. Granted I don’t have fancy audiophile equipment.

I have a yearly sub on Qobuz which runs till May next year, and pay monthly for both Tidal hi-fi and Apple One. I love to listen to Apple Music on my Android phone when I’m walking or at work. Apple knows the music I like and they also have good radio stations to listen to.

When it comes to choose between Qobuz and Tidal. Haven’t decided yet.

Thanks, in the end I’ll just try Qobuz for a couple weeks and then tidal and see what I like better.

I don’t get any dropouts with Qobuz right now compared to before so that’s a good start.
I like that it seems less hip hop oriented too.

I’ve read here that Qobuz has more jazz and classical music compared to Tidal. No idea though, as I’m not into that stuff

Nor hip-hop for that matter.

I find it weird that a new Pop album like Billie Eillish’s new album has no info on roon while on the Qobuz website they have a nice description.

That’s just an example but that seems to happen a lot.
I guess that’s the same regardless of the streaming service inside roon?

I feel like 2 years ago I didn’t see that as often.

I like a bit of jazz but not that much, I just like that Qobuz suggests classic albums instead of top 40 stuff.

This Tidal hip-hop focus is a myth. Sure, to start with it has a lot of r&b, hip-hop, pop on the front page, but it learns your tastes pretty quickly and tailors suggestions and playlists to them very nicely. I do all curation in the Tidal app, not in Roon, and I occasionally use the app to stream to our Sonos Roam. No Qobuz here in Canada so I can’t comment, but I think Tidal is an absolutely first rate product with excellent sound quality and a library that leaves me wanting for nothing, and unlike the haters, I am very happy with MQA - my Lumin T2 does a really excellent job of decoding it.

I was happy too with MQA, I thought it sounded bigger in the low end in my system at the time.

But the Tidal tab inside roon never seemed useful to me, it didn’t seem like it was suggesting music similar to what I listen to.
Maybe my memory is wrong or things have changed.

I’m in Canada too but I created a Qobuz account with a VPN back when it was possible.

I do all curation in the Tidal app, not in Roon, and I occasionally use the app to stream to our Sonos Roam.

Next time you can try using Tidal app to play to Lumin T2 via Tidal Connect.

I’ve tried that, works great. But so does Roon! To be fair, I occasionally use the Lumin app when our internet connection is particularly flaky and Roon is skipping Tidal tracks, so next time that happens I’ll try the Tidal connect.

I’ve used both Tidal and Qobuz for sometime. I find the sound quality on Qobuz to be consistently better in my system than with Tidal. As far as suggestions, I’ve found that Qobuz does slightly better with suggestions than Tidal. I always felt that I was getting feed more Rap suggestions on Tidal, which isn’t the case on Qobuz. Just cancelled my Tidal sub. so will see if I miss it or not.